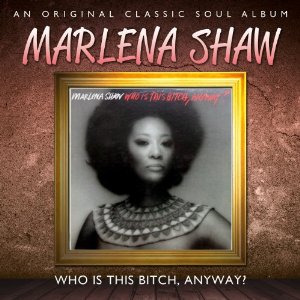 “No, I’m telling you, this is not a dress rehearsal,” laughs a relaxed Marlena Shaw, who is talking to SJF while cooking ribs at her home in Las Vegas. She’s musing philosophically about her longevity as a performer and this year celebrates fifty years in show business. “I’m very pleased to have had such career,” she says. “I’ve been very blessed. I thought when I got to be about forty it would probably be the end of my career because the United States in particular is so youth-oriented: if you can’t fit in a size four dress then it must be over, right?”

Marlena laughs again. In fact she laughs a lot during our interview – “I’m basically a happy person” she reveals – although earlier in the year she had to press the pause button on making music and take it easy for a while. “My doctor pulled me off the road for six months,” she discloses. “He didn’t like the sound of my heart and lungs.” Thankfully the enforced period of rest has paid off and sixty-nine-year-old Marlena is fully fit and raring to go back on the road. In fact, she’s about to embark on a short tour of Japan, a country where she has a substantial and enthusiastic fan base. “They’re calling the tour ‘Who Is This Bitch, Anyway?’ and I’m playing with the musicians from the ‘Bitch’ album – David T Walker on guitar, Harvey Mason on drums, the wonderful Larry Nash on keyboards and Chuck Rainey on bass. So we have a lot of stories between us.”

Naturally, Marlena will be including a lot of material in her set from ‘Who Is This Bitch, Anyway,’ a long player that has led something of a charmed life since its release in 1975. It didn’t yield any big hit singles but has been a consistent seller for the New York-born singer over the years. “It’s amazing how this album has been selling for so long, in particular in Japan,” she muses, amazed by the fact that many of her fans over there are young people who weren’t even born when the album first came out. The Japanese, she says, also show a deeper appreciation for jazz and soul music than her homeland. “They go for the feeling,” she explains. “They just don’t have to have something to tap their feet to. I think it has more to do with the feeling because I hear so many times from them: ‘you give me spirit,’ or ‘you give me power’.”

Certainly, there’s plenty of what her Japanese devotees call power and spirit in Marlena’s music, which she describes as ‘eclectic.’ Her sound is a fusion of different styles – soul, funk and jazz – but it’s rooted in gospel music, a crucial foundation stone for so many African-American singers. She’s even done disco records in the past but has never sacrificed her distinctive personality and has always been allowed to be herself. In an exclusive interview with SJF’s Charles Waring, she spills the beans about the classic 1975 Blue Note album, ‘Who Is This Bitch, Anyway?’ and also talks frankly about other aspects of her richly productive career…

What inspired the album title ‘Who Is This Bitch, Anyway?’

I was in St Louis and there was this man who was playing the jukebox in a club. My record ‘Just Don’t Want To Be Lonely’ (from 1976, which previously had been a big hit for The Main Ingredient) was on the jukebox and he loved the song. I used to have what we called a turntable hit because all the disc jockeys loved it. This guy dropped more quarters in that sucker than I’ve seen here at Vegas. This was in the afternoon when I came in for rehearsal. He was there in his work clothes. Later at seven o’clock in the evening when I came in to do the show, this same guy was still there and he’s still in his work clothes and by now he’s pretty potted. The owner of the club said “my man, you’ve been playing this record all day and the woman who sings it is here: she’s going to perform here.” He turned around to him bleary eyed and said “well, who is the bitch anyway?” He didn’t even know who I was but he was pushing the button to hear my song over and over. So I kept that in the back of my mind also and it just seemed to fit as an album title.

The first track, a dialogue piece called ‘You, Me & Ethel,’ is remarkable. What do you recall about how it came about?

My producer Bernard Ighner said: “Marlena, have you thought about doing a monologue in front of ‘Street Walking Woman’? I’d written the tune and it was really going to be more jazz-oriented. He was thinking of doing that because I’d become known for my monologues on stage. No matter where I am, people want to hear me talk: they say “shut up singing and talk!” At first it was going to be a monologue with me sitting at the bar and talking to everybody but then Bernard said what you think about doing dialogue with Byron Olson and you? Byron was an arranger who was doing music for ‘The Waltons.’ I was in Los Angeles and went over to Byron’s house and he really talked really white. I wrote some little sketches for us and we winged it and it just worked. Basically it’s radio. I’m a child of radio so I like the production, which gets your ears going.

What was Bernard Ighner like to work with as a producer?

Oh wonderful because being an artist himself, being a wonderful singer, his sensitivities were similar to mine. It wasn’t like “well, Marlena, come on I know you can do it” like some of the newer producers used to say. They’d go: “Come on now, give it to me. I want you to really give it to me now.” That would never have worked with me. He’d ask me to come into the studio and say “OK now play this” so the guys (the other musicians) could hear what the feeling was.

Did you have a choice in selecting the songs?

Yeah, I did but let’s face it the stuff that he gave me was really already built for me so to speak – that plus the fact that he wrote some of the things as well. So most of the songs he had sent already. We really discarded very few songs. I don’t even remember what some of them might have been. There was one that he had called ‘Willie’ and which I loved but I was too old to sing it. It went: “Willie never notices me, ‘cos Willie’s older than me.”

Why do you think the album is still popular today?

Gee, I have no idea except I like it. But to be honest with you I still like the sound of vinyl, I hear so much more. It’s nice and fat. In fact you can say I love fat! (Laughs)