WE ALL NEED A HERO… the GIZELLE SMITH interview 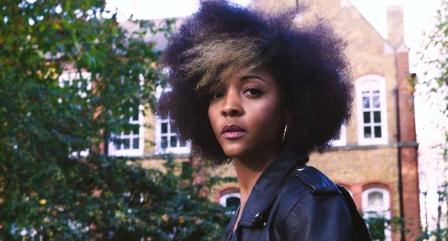 Since the start of the year an insidious little tune called ‘Hero’ has been all over the place…. club plays and radio rotation has caused a buzz about the artist, GIZELLE SMITH. Seasoned sleeve note readers will recognize Ms Smith’s name from her time with the Mighty Mocambos. Now, though, she’s well and truly out there on her own and with an album. ‘Ruthless Day’ set to drop at the end of this month, we thought the time was right to find out more about Gizelle….. First some background….

Well, my name is Gizelle Smith and after studying forensic science, hairdressing and god knows some other iffy career options, I decided to do an MA in composing for film. I’m originally from Manchester but moved to London where I landed a job as co-composer and vocal coach for a youth theatre company based in Camden, in-between touring with The Mighty Mocambos. I always wanted to be a performer but my mother did that ill-informed thing and insisted I had a ‘fall-back option’, hence the above initial career choices. I was super confused growing up because nothing I chose to do felt right and there was always this nagging at the back of my mind that I should be doing music but I was very shy and it wasn’t till I met the right people who pointed me in the right direction, did I make that step towards my true path.

I believe your father was in the music biz – tell us about that and did he influence you in any way…. indeed did he encourage you or even discourage you!

My father Joe Smith was a guitarist for the Four Tops after they moved from Motown Records to ABC. He has always been a big part of my life spiritually. I didn’t grow up with him unfortunately but I’ve had a very strong connection with him since I was a baby and being around him at a very young age has been enough influence to cause me to pursue a career in music. Or then again, has it? I guess it’s a play on the whole nature/nurture debate. Maybe I’d always have gone into music regardless of who he was… who knows! He was always wary of the idea of his children getting into the industry but it turns out, I’m the only who did and he’s super pleased and proud. I need to call him actually.

Tell us about your early days in the business…. and your time with the Mocambos.

Hooking up with the Mighty Mocambos was my first step into the business as an artist. I was performing before that, on a low key level, with a couple of residencies in restaurants, singing with a pop choir and playing trumpet and singing in a jazz big band. I met my producer Steffen ‘Def Stef’ Wagner on my course at University and he introduced me to his brother Bjoern who owns Mocambo Records and runs The Mighty Mocambos. I lived with him in Hamburg for a few months whilst I finished my dissertation and we both toured with Indra Afia – a German soul artist, where Bjoern on guitar and I was on bv duty. Soon after, I was gigging with the Mocambos, playing mostly covers and we were approached by a booker who suggested we put an album together. So we did, with no expectations whatsoever and it seemed to hit the spot in the funk scene. Our first single ‘Working Woman’ was picked up by Kenny Dope and we spent a couple of years touring UK, France and Germany.

Why did you decide to break away from them and go solo?

At the time we had different ambitions. I really wanted to be on the road and the guys all had full-time jobs so it was tricky. The irony is, they went on to do another 3 or 4 albums and I did sweet FA. Till now, 8 years later…

So is ‘Ruthless Day’ your first solo effort?

It’s my first long-player. I released two 45s as a solo artist: ‘June’ on Record Kicks and ‘Jonny’ on Mocambo Records.

Tell us how you put it together? And what kind of sound were you aiming for?

Minus the two of the tracks I co-wrote with The Soul Surfers (wicked funk band from Nizhny Novgorodm), musically the writing process was pretty casual. We went in the rehearsal room to jam some ideas, with the mindset to just see what comes out after being away from music for 8 years. Steffen brought the demo recordings back to the studio where we developed the structures and I stuck the vocals and horn lines on. We worked with some great musicians and they were always relaxed and keen to play around and try ideas out. Some of the guys come from a jazz background, so we played with chords more, which in turn gave me lots of scope to play around vocally. Sonically, we mostly stayed away from modern, recording techniques and tracked the instrumentals at Big Noise Studios in Southend-on-Sea, which is an analogue studio. Recording on tape gives the songs some heat and is, in a sense, the glue which sticks my more contemporary style of funk and soul writing to the 60s/70s era. We’ve never been ones to want to reproduce what’s already gone before. We just kinda wave hello at it.

Why choose ‘Ruthless Day’ as the title track?

‘Ruthless Day’ is a reference to the day I had to hold my hands up and admit I was desperately sick with depression. It was a pivotal moment because at the time, I’d been in Manchester for 18 months looking after my sick mother, had no career and felt like there was very little to live for and that’s when my dear friend and producer thought that getting back into writing songs and hence, giving me a purpose again would give me a positive focus. Depression – whatever the cause, is real. And it’s so important we’ve had such a huge increase in awareness and bother of mental health issues. My friend runs a wonderful project and magazine called Mental Movement Magazine and it’s a great resource for both people suffering with their mental health and friends and family who want to help and understand. Anyway, that day ignited the album’s inception.

The tune that’s winning favour at the moment is ‘Hero’ tell us about that one?

A duet with E da Boss! He’s so great to work with. Eric brings a distinct flavour and style to my songs. He came over for a writing session and we couldn’t think of a topic to write about. So we opened a random newspaper and there was something in there about a hero, so that was that. But the hero we sing about is more metaphorical. It’s about people who struggle to know their role or worth in life. They suffer the daily grind and they long to be recognised for some kind of value or meaningful purpose. ‘Hero’ actually started life as a floor shaker – it was much faster. Then my producer asked us to try it as a balled. We recorded both versions though.

Any other tracks that you’re particularly proud of?

‘Ruthless Day’ because it’s bone-scrapingly honest. I’m particularly proud of my vocal arrangements in ‘Round Again’. They sound – and I hate this word – LUSH. There. I said it

So what next for Gizelle Smith?

I’ll be getting out and about. My ‘Ruthless Day’ started on 17th March in Grenoble and we’ll be bobbing in and out of France over the next couple of months. My album was properly launched on the 24th March at Archspace, London and the album comes out finally on 30th March. Good times!

It’s all @ www.Gizellesmith.co.uk ….That’ll direct you to all the usual places – Facebook, Twitter, Instagram – I love instagram. My sense of humour has been reduced to that of a 14 year old boy because of the crap on there. You’ll also find links to my updated tour dates and also where to buy my music.