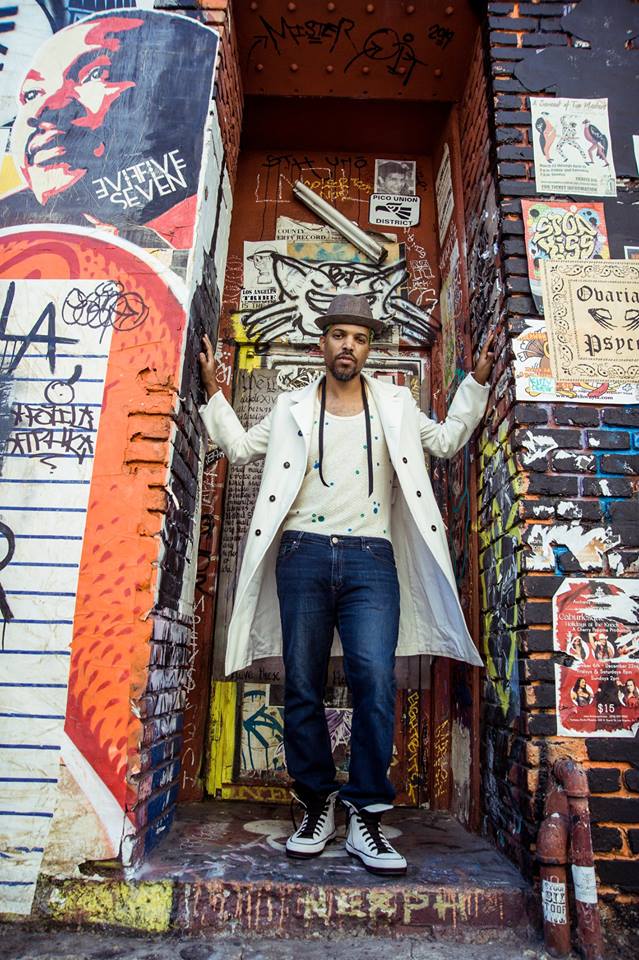 Funk is in Van Hunt’s blood. That’s no surprise, perhaps, because he is, after all, a son of Dayton, Ohio, which to those among you who are clued up on rhythm and blues history is recognised as America’s undisputed capital city of funk music. Over the years it’s given us a host of key funkateers, including Zapp – and the band’s leader, Roger Troutman, who enjoyed a successful solo career – Slave, Sun, Aurra, Lakeside and, of course, the group that put Dayton on the music map in the first place, the mighty Ohio Players. “My father and his brothers played their music all of the time,” laughs Van Hunt, acknowledging the group’s importance to his own musical upbringing. “They bragged about the fact that these groups were from their area and in some cases right from the next street.”

It was, then, almost impossible not to be infected by funk fever if you lived in Dayton and given his heavy exposure to R&B music, it was no surprise, perhaps, that Van Hunt became a musician himself. Initially he gained renown as a songwriter in the late 1990s when he wrote material for ex-Arrested Development singer, Dionne Farris (he penned her 1997 Top 30 US R&B hit ‘Hopeless‘) and neo-soul man, Rahsaan Patterson. In 2004, he signed a deal with Capitol Records and released his self-titled debut album which fused soul, pop and funk elements into a fresh and distinctive individual sound. The set yielded the noteworthy singles ‘Dust,’ ‘Seconds Of Pleasure,’ and ‘Down Here In Hell (With You)‘ and received a Grammy nomination. His second album, 2006’s ‘On The Jungle Floor,’ took a rockier turn (it included a cover of The Stooges’ ‘No Sense Of Crime’) and in 2007, Hunt scooped a Grammy with John Legend and Joss Stone for his part on the Sly Stone tribute album, ‘Different Strokes By Different Folks.’

His third album, ‘Popular,’ was originally recorded for Capitol but was scheduled for release by Blue Note in 2008 who then mysteriously shelved it. That could have seriously derailed Hunt’s career and although he lost some of the momentum that he had been building, three years later, Van Hunt was back on track with a new long player, ‘What Were You Hoping For,’ released via his own label, Godless Hotspot. For those expecting orthodox R&B and funk, it proved something of an unexpected stylistic curve ball with its prominent distorted rock-style guitars.

Fast forward to 2015 and Van Hunt returns to the fray with a new album, ‘The Fun Sets, The Fun Rises.’ Though not as radical or challenging as 2011’s ‘What You Were Hoping For,’ it’s nevertheless trying to take funk and R&B forward into the future. It also contains some brilliant ballads. In a revealing interview with SJF’s Charles Waring, he talks about his new project as well as the legendary lost Blue Note album, the ups and downs of the music business…and getting the inspiration for a song in a Maidstone churchyard…

What’s the story behind your fifth album, ‘The Fun Rises, the Fun Sets’?

It’s just me trying to settle in and make some more music. Just me expressing myself really and still making a living. The title really just came from the last song on the album. I think the song is more about being able to accept reality for what it is, the ups and the downs, and celebrating them both.

It’s hard for me to tell to be honest. I’ve heard people compare this to the first album or to the record that I did that was never released, called ‘Popular.’ I feel that the response has been as positive as every other record that I’ve done.

Do you see your music going in a logical progression, from where you’ve been before to where you are now?

The last record (‘What Were You Hoping For’) was much more bombastic, a lot more guitars and I think because ‘Popular’ wasn’t released, I think most people missed that step from ‘On The Jungle Floor’ to this record, so, I think that if you haven’t heard my third or fourth records then this record makes more sense as a follow-up to my second record, which was ‘On The Jungle Floor.’

Given that you write, play, produce, and record most of your music on your own, how would you describe the process for making this album?

Probably hellish (laughs). No, it wasn’t that bad but when you have to crawl inside your head and pull all these ideas out it can be exhausting particularly given the social and political climate in this day and age.

When you’re writing a song do you put a rhythm track down first or build it around a chord sequence?

Usually the idea comes to me pretty complete. It’s usually something that I emerge from my sleep with or something that will hit me when I’m driving. Generally, all the song is there from the lyrics, the rhythm, to the bass, and alternating guitars. Things like that are usually all there and it’s just a matter of sitting down and putting all the parts down. It probably takes about an hour. It starts from anywhere in the track to be honest. It almost has no start or end point. When people try to write out the rhythms to West African drums they generally fall short because there’s no start point: every downbeat can be a one… my music’s kind of like that; the rhythm dictates the feeling and the emotion in the track so it’s difficult to say where I start. It could be a melody, a beat, but it’s all kind of there simultaneously.

The song ‘Puddin” is one of several standouts on the LP. What was the inspiration behind it?

That actually came about from being on the road after the ‘On The Jungle Floor’ album. I was getting to release my third record, ‘Popular,’ and we were just playing and that was one of the choruses that we were messing around with: (sings) “I don’t want any more puddin” (laughs). A few years later I just put the track to it. It’s got an African rhythm but with the old gospel quartet guitars on it, that you might hear from founding groups like the Violinaires or the Brooklyn All-Stars.

The new album is coming out on your own label. Does that mean that you’ve had your fill now of major labels given what happened to you at Blue Note?

Oh, no, not at all. I would love to get into a situation where people were serious about marketing serious musicians and serious craftsmanship to the public. I’d be happy to get into a situation where somebody was serious about figuring a way to market my music to the public. The public definitely want to hear it but they don’t want to have to look for it (laughs).

America’s Got Talent judge Randy Jackson is your manager. What’s his strength as a manager and what have you learned from him?

I think his strength is being able to support your vision with a real solid and experienced voice. This is a guy who has perfect pitch, he can read music, is a great musician and also understands the business of the music industry. So when he talks to you he knows music history and he can talk to you from so many different angles and yet seemingly from all of the angles at the same time.

Going right back to the beginning, you’re originally from Dayton, Ohio. What was it like growing up in a city where so much was going on musically and there was so much history?

I imagine in many ways it’s very much like many other blue-collar areas. It has really grounded people who grew up expecting to have to work for what they earn and that’s really where it begins. Whether there’s religion involved or not, you know, it really comes down to not expecting much from life and knowing that whatever you get you’re going to have to work for. That’s really where it began and with Dayton in particular because a lot of people don’t know that the Wright brothers – who were credited with inventing flight – came there to set up shop so there were a lot of technological advancements in Dayton. It was like the Silicon Valley of the Midwest for a while there so the education in the public school service was really good. That’s the main reason why you had so many groups – from the Ohio Players to individual musicians like ‘Junie’ Morrison – coming out of Dayton because they had been taught music by really good music professors in high school.

What other musicians have helped to shape your own style?

I would say primarily Thelonious Monk, Sly Stone, Prince, and Bessie Smith – I just like the simplicity from where she came as a singer.

What attracted you to Thelonious Monk’s music?

Oh, everything about Monk. I haven’t heard a Thelonious Monk song that I don’t like. I can put on everything from ‘Brilliant Corners’ to ‘Monk Alone In San Francisco.’ I think his peers were fans of his, because I think Coltrane, Charlie Parker, Dizzy Gillespie and Miles (Davis), I think they all understood that in order to be a great soloist you need a great song and Monk was the king of songwriting in that era of jazz. I think that’s why they all loved playing with him and all loved playing his songs because his melodies were so strong. It was something that he even bragged about, the fact that kids could sing his music. And that’s so much fun for a virtuoso musician because the main thing you want to do is violate a song’s melody as exaggeratedly as you can. You’ve interviewed George Benson and he was brilliant at doing that. He’d just take a melody with his guitar playing and approach it a 1000 different ways.

Do you come from a musical family?

No, not at all. My family loved music but I certainly can’t call them musically inclined. To be honest, man, I’m a real recording artist. I love creating and I love everything about it from waking up in the morning with an idea to laying down all the parts to then taking that and making a visual representation of what that is with photographs and album artwork and then turning that into this piece that is all encompassing: artwork, sound and even smell (laughs).

You started out as a drummer.

Yeah, mainly just beating on tables but my cousin had a drum set and he played a little bit of drums open-handed so when I learned I learned to play like he did. And so ever since then I’ve been an open-handed drummer and I do think that some of my favourite drummers play that way, Lenny White and Joseph McCreary – people know him as ‘Foley’ – and there’s something about that style of playing that I think just gives you a certain little twist to a feel. I really got into the drums early, and then there was the saxophone and from there on I started picking up instruments one by one. Once you learn how to play one you can kind of figure out the rest of them. I wouldn’t consider myself a master of any of them but I certainly can master the process of pulling out ideas from my head and interpreting them for the public.