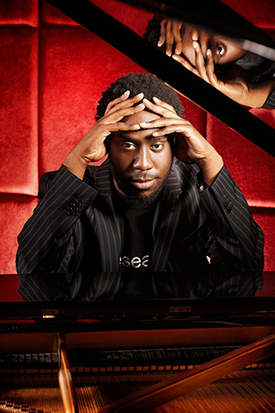 So do you like a drop of something in the studio then?

Yeah, exactly, man. (Laughs). I’ll be having bottles of liquor and we’ll be trying to record. We usually start recording in the midday so that by the time you’re really into it, it’s night time. You have some liquor and you treat it (the recording session) like it’s a jazz club so it feels more natural that way.

What’s your favourite drink then when you’re recording?

Oh, I’m a vodka guy and a wine guy. White wine or vodka. One or the two.

Well, it’s certainly inspired this new album. I love the version of ‘Afro Blue’ that you have done.

We were drinking white wine when we did that, me and Erykah (Laughs).

It was done live then that track?

Actually, that track we didn’t do live with her at the same time because she was on tour. So the only way to make it happen was we recorded the track first and then I met up with her in New York, a month later, in the studio. She recorded her vocal there and then I put acoustic piano after her vocal.

Oh man, she is so great, so great. She’s very easy to work with and very open to suggestions. She was a joy to work with: a beautiful person.

Lalah Hathaway joins you on a remake of Sade’s ‘Cherish The Day.’ How did that collaboration come about?

She was our special guest last February at the Blue Note jazz club. I just chose ‘Cherish The Day’. For some reason I heard that in my head.

Is it one of your favourite tracks?

What? ‘Cherish The Day’? No. Don’t get me wrong, I like it but for some reason we were trying to choose songs for Lalah to do at the Blue Note and that song just popped into my head because for some reason I heard her there. I’ve always liked the tune and so when we did it live at the Blue Note I said, “oh, by the way, would you mind being on my record? And also, would you mind singing ‘Cherish The Day’?” She was cool with it.

She’s got an amazing voice, hasn’t she?

Another cover version on the album and an unusual one is your choice of David Bowie’s ‘Letter To Hermione.’ How did that come about?

I heard that one time and I fell in love with it. A friend of mine actually gave it to me and put it on my computer a long time ago. I never listened to it and it was just there and I just ran across it randomly going through my computer a few weeks before the recording. I listened to it and I thought “oh shit,” and automatically heard Bilal on it in my mind. David Bowie just sounded so honest on that and it sounded like he really went through that. He really portrayed that song. It’s not perfect but I love that. It’s just a vibe that’s there so I really wanted to do that, because of the fact that it was obscure and a lot of people don’t know it and because it’s so beautiful.