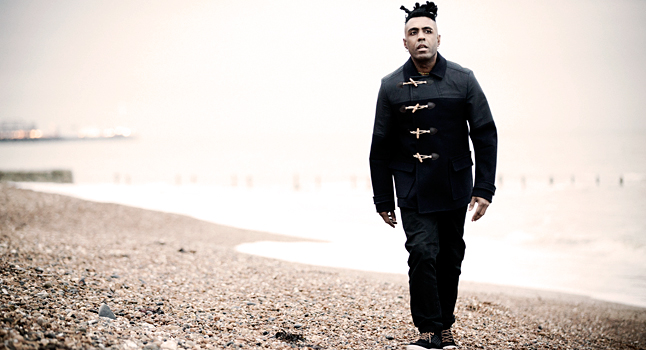 Going right back, what first drew you to music?

I started when I was eight years old, and my father was a drummer so he gave me my first drum kit and that’s what put me in that zone. My first lesson would have been with the cornet, followed by the guitar, then the piano, and then it was percussion, then the tuba and the euphonium. So I was always in and around music, but more so classical music.

You played in the Kent Youth Orchestra, didn’t you?

Yes, the Kent Youth Orchestra. I was the principal percussionist there as well.

What memories do you have of those days?

Oh, fantastic (laughs). We toured Italy, Brazil, North America. I used to play the Royal Festival Hall every year pretty much. I remember all the smells of the Royal Festival Hall and round the backstage area. I can visually remember it after you’ve done an orchestral course for a week with kids and stuff but the pieces of music they picked – Mahler, Brahms, Dvorak, Debussy – stick in your head and that’s where my classical string arrangements come from, from the influence of being in those settings. I’ve played with brass, percussion ensembles, orchestras, everything. And I think that has shaped my music. I remember thinking to myself when I was there, ‘one day I’m going to play this place by myself as Omar.’ I was 13 or 14 at the time because you know when you play percussion in an orchestra you’re always at the back. ‘I’m going to be at the front one day,’ I said to myself, and since then I’ve played it twice and realised the dream.

What musician has influenced you the most in regards to your own music?

Well, that would have to be Stevie (Wonder), of course. ‘The Secret Life of Plants’ is my favourite album of his.

Was that the first record of his that you bought?

Yeah, I think so. I also remember buying Michael Jackson’s ‘Off the Wall,’ The Police’s ‘Regatta De Blanc,’ and the Stranglers’ ‘Golden Brown’…

Which you covered, of course…

Yeah, right, exactly! But ‘The Secret Life of Plants’ is the one where he encapsulates everything that I love about music: the vocal arrangements, the instrumentation, the production, you know, it’s everything basically. He covers so many different things for me. He’s a multi-instrumentalist as well and an amazing vocalist and does amazing harmonies. He taught me how to do harmonies.

How did it feel to actually work with him later in your career?

It was a pinch-me moment. I was lucky that my ex-manager, Keith Harris, gave Stevie my second album, ‘Music.’ He heard it and said he wanted to work with me from then. We did a TV show together and then I went to LA and he invited me to the studio but we didn’t get anything done then and then eight years later, I get a phone call out the blue, and it’s him; ‘hi, man, I’m in town.’ I said ‘who is this?’ He said ‘Stevie.’ I said ‘Stevie who?’ He said ‘Stevie Wonder.’ Then for two weeks we were just hanging out, in restaurants, clubs, and hotels and we said let’s go to the studio again. I thought ‘wow, is this really happening?’

Does that count as one of the highlights of your career?

Oh yeah, absolutely, and having him write a song for me as well, the duet called ‘Feeling You.’ I think I can go to my grave quite comfortably and say I’m done after that. To work with him is top of the pile.

What are your memories of the summer of ’91, when you made your breakthrough with ‘There’s Nothing like This’?

Well, it was the time of Acid Jazz, I remember. People were learning to sample but they were going back to live instruments as well. There was myself, the Young Disciples, the Brand New Heavies, Incognito, and Jamiroquai, who came out not long after that. So it was all like a revival thing. It was an exciting time.  I was glad to be riding part of that wave.

What about today’s new talent? Do you keep your ear to the ground regarding up and coming people in the R&B world?

I do. There are a couple of young singers I’ve been checking out. One is called Shanice Smith, who plays guitar and sings. Ego Ella May is another young singer and there’s also a young girl called Kianja. So there’s a lot of young, unsigned talent out there. I wasn’t anything like that at 19. I had to develop my vocals and writing skills but the stuff they are coming out with right now is amazing.

They sound fully-formed, I suppose…

Well, pretty much. It’s amazing. I’ve got a couple of website things coming up next weekend and I’ve been singing with a singer/guitarist called Ollie Clark. Check this kid out, he’s great. He’s only 23 but has amazing skills on the guitar.

You’ve been recording since the mid-’80s and a lot of your contemporaries are no longer active. How have you managed to stay in the game so long?

I’m not a group in the first place. A lot of groups go through a lot of things. It’s like a marriage and it’s tough to keep everything together. I’m just one man so I can’t breakup at all and I’m stubborn enough to enjoy what I do and reflect that in the music that I make. As long as I’ve still got a fire in my belly to make music and get excited, like when I’ve got a rhythm going and a song, that sounds fantastic to me, I’m just going to keep making it. I’m still enjoying myself and I’ve been blessed enough to be in this for 33 years. I go in the studio and go on tour and I’m on my eighth album now and working on album number nine as we speak.

Have you got any unfulfilled ambitions or are there any projects or collaborations you would like to do in the future?

Well, if you asked me who would I like to work with, alive or dead, I would say Bobby Womack. He was a big influence on me. Also, Bill Withers. I would love to work with him. He’s still around but he doesn’t work and has shunned the music industry, which is a shame. I’ve been acting as well. I’ve got a one-man play called Lovesong that has been written for me by a guy named Che Walker, and I’ve been performing that. I’m also developing a script for a four-part drama series as well, based on my time at a school in Manchester, at Chetham’s School of Music.

How does acting compare was being a musician?

Oh it’s so much harder (laughs), just to get your head above water. I started late, very late. I’ve got a certain look, a certain colour, a certain age, everything. You know what I mean? Lots of things are against me, basically. I’ve got a friend, Max Beesley, who used to play keys and percussion and then decided to do acting and went full force into it. He’s done so well at it but he dedicated his whole time to it. His agent told him he couldn’t tour as a musician so he just had to totally focus on that and had to make a choice. But there’s no choice between acting in music for me. It’s music all the way.

Tell us about your one-man-show, Lovesong.

I did three sold-out nights at the Shepherd’s Bush Theatre. I bring it out every so often and I’ve been doing it since 2012. It’s just a great little piece and I’m blessed that Che wrote it for me. It’s a 50-minute monologue with my songs in it and every time people leave, they seem to be really impressed by the story and the songs. So I’d like to develop from that and get some parts in films, so if anybody’s listening…