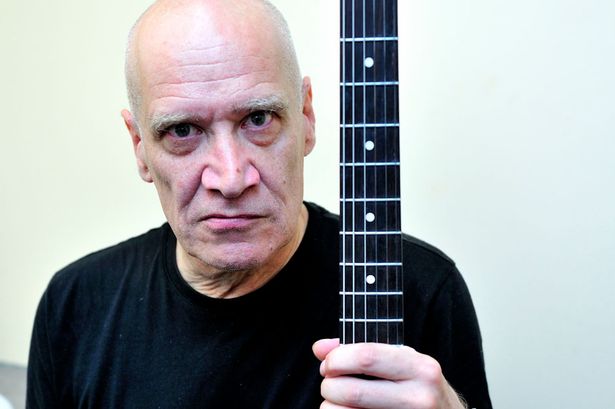 With his po-faced demeanour, intense manic stare, Pyrex bowl haircut, and black-suited undertaker look, Wilko Johnson certainly caught the eye in the mid-1970s as the charismatic guitarist in the legendary Canvey Island R&B quartet, Dr. Feelgood. He was one scary-looking dude – perhaps that’s why he was cast in the role of a mute executioner, Ser Ilyn Pane, in the hit TV series Game Of Thrones. But the way that he charged back-and-forth across the stage when he was in Dr. Feelgood wielding his guitar like a machine gun while firing off shard-like R&B riffs with deft, karate-like chops to the strings added to his mystique. He was sensationally fired from Dr Feelgood in ’77 and co-founded Solid Senders – a short-lived, one-album outfit – before playing with Ian Dury’s Blockheads. He then formed the Wilko Johnson Band, which recorded its first LP, ‘Ice On The Motorway,’ way back in 1981, and, amazingly and against the odds, the group is still going strong today in 2017.

The first thing that strikes you about Wilko Johnson is that he laughs a lot. Perhaps that’s because he can’t believe his luck – after all he’s had the biggest reprieve of all and famously eluded the Grim Reaper’s scythe when many others before him had failed. He’ll be 70 later this year but four years ago he didn’t think that he’d make it to that milestone. That was when Johnson had a life-changing bombshell dropped on him: he was diagnosed with terminal pancreatic cancer and given a matter of months to live.

“I remember I was absolutely calm, dead calm” reveals Johnson, in an interview with SJF’s Charles Waring. “I didn’t freak at all …and I wasn’t expecting that.” Instead of being gripped with fear and panic, he matter-of-factly accepted his fate, rejected chemotherapy treatment, and vowed to live his life to the full until his allotted time was up. He quickly embarked on a farewell tour – “we played some great gigs” he laughs – and recorded what was intended to be a valedictory album called ‘Going Back Home,’ with The Who’s Roger Daltrey. That long player was going to be Johnson’s musical epitaph but later that year, he underwent surgery to remove the tumour that was the source of his ill-heath. He ended up losing not only the tumour – which weighed in at a whopping 3 Kg – but also his pancreas, spleen and part of his stomach. The operation was a success and, miraculously, freed the guitarist from the dark spectre of cancer.

69-year-old Johnson’s recovery has been extraordinary and since then he’s starred in a Julien Temple-directed documentary (The Ecstasy Of Wilko Johnson), written a well-received autobiography (Don’t You Leave Me Here: My Life) and curated a superb compilation exploring the Chess Records vaults called ‘The First Time I Met The Blues.’ Now, he brings his own career under the microscope with this 25-track/2-CD solo retrospective called ‘Keep It To Myself: The Best Of Wilko Johnson,’ released on the Chess imprint.

In a candid and revealing interview with SJF, the legendary rhythm and blues maven talks about his new album, his time in Dr. Feelgood and his much-publicised battle with cancer…

Your new album’s coming out on Chess, a label that you idolised back in your youth.

I must say that during the last three or four years many strange things have happened to me after I was diagnosed with cancer. That whole year was just packed with incident and strange things that you would never have expected. One of the funny things was making the album (‘Going Back Home’) with Roger Daltrey. When we were making it, it was actually going to be the last thing that I did. I didn’t even know if I was going to live to see the thing released. But the record was working out so well and everyone was so enthusiastic about it, including Universal, who happened to own the Chess insignia. Everyone was coming up with ideas for the album and they said “why don’t we put this album out on Chess?” It was wild, because when I was a teenager, if someone had said to me, “you’re going to be on the Chess label,” you would think they were mad. But it happened and, in fact, while I was lying in hospital after my operation, the record had come out by then and was very successful. I was lying there in a stupor and people were going, “oh man, the record’s selling” and I was just groaning. One of the things that happened was, they brought a silver disc into my hospital room and put it on the side. Just afterwards, this nurse came into my room, looked at this thing, and said “what’s that?” I said “it’s a kind of award” and she looked at it a bit longer and then saw the Chess logo and said “oh, do you play chess?” I said, “well, kind of.” (Laughs).

Yeah, I didn’t think I was going to live to see the thing released. Roger had called me up and said “let’s do that album.” It was something that long ago we just casually talked about. We had this idea and Roger said we should do an album together. I said “oh yeah, let’s” but we never got it together. My illness prompted Roger to zap in and do it so I thought I’d take that opportunity to do some songs that I’d written so that it could be some kind of memorial to me. But, as I said, I didn’t even know if I was going to see it released. I didn’t entertain any ambitions for it but when it was released, it started selling really fast. But by that time I was really thinking more about cancer than anything else. Then suddenly these incredible people from Addenbrooke’s Hospital came into my life and said that they could save me. That was really all that was in my head at the time. So, I had the operation and I woke up the next day and thought, “God, I’m alive!” I felt like this huge thing had been removed from me. And on top of that I was getting silver discs. (Laughs).

How did coming so close to death change your perspective of life?

It was one of the most extraordinary and incredible years of my life. We all imagine: “what would I feel if I went to the doctor and the doctor said you’re dying” but it wasn’t anything like I’d ever imagined. When I was given the diagnosis and told “this cancer is inoperable, you got less than a year to live,” I remember I was absolutely calm. Dead calm. ‘ I didn’t freak at all ….and I wasn’t expecting that. I wasn’t even expecting them to tell me that I had cancer. It was a surprise but not a shock. I was calm and thought “right, they told me I’ve got less than a year to live, a few more months on my feet, and that’s alright. I’m just going to have the best time I can.” I didn’t go looking for second opinions or miracle cures or anything like that. I thought “no, no, I don’t want to spend my time freaking out and sitting in doctor’s waiting rooms and being disappointed. I’m going to die, so I’m just going to have a good time in the meantime.” And I did (laughs). I had an extraordinary time. I was in an elevated state in a way. I am by nature a miserable so-and-so, and all my life, really, I’ve suffered from depression but that all got left behind. I was flowing through it, because everybody knew about it as well. You’d get the most extraordinary kind of closeness with people when you felt their sympathy. It was really quite touching.

And how were the gigs at that time?

It was absolutely fantastic playing gigs. When you walk on the stage, you’re in a situation where there is no future. The past is gone and you go on stage to play a gig and it’s not like you’ve got something to prove. You haven’t got anything to prove anymore because there is no anymore. You’ve just got the moment you’re in and that’s the way I was trying to live: “this is the moment I’m in, I’m okay now, I’m alive now and I’m going to die but right now here I am.” And when you’ve got a whole audience who know you’re going to die, you can’t explain the feelings you get (Laughs). But we played some great gigs. That was just great. I was in a different state. But then this operation saved my life, which was another one of the extraordinary things that happened. There were so many twists and turns during that whole year but it’s fading from me now like a dream. I look back on it now and I think wow. Every morning I was waking up and remembering in the first second or two seconds, “I’m going to die.” You might feel a bit miffed about that for couple of minutes but then you think “sod it, I’m just going to carry on.” When I look back now that I’ve come back to everyday reality and it seems extraordinary to me. I did have some pretty profound insights into life during that time but what they are now, I can’t remember! (Laughs).