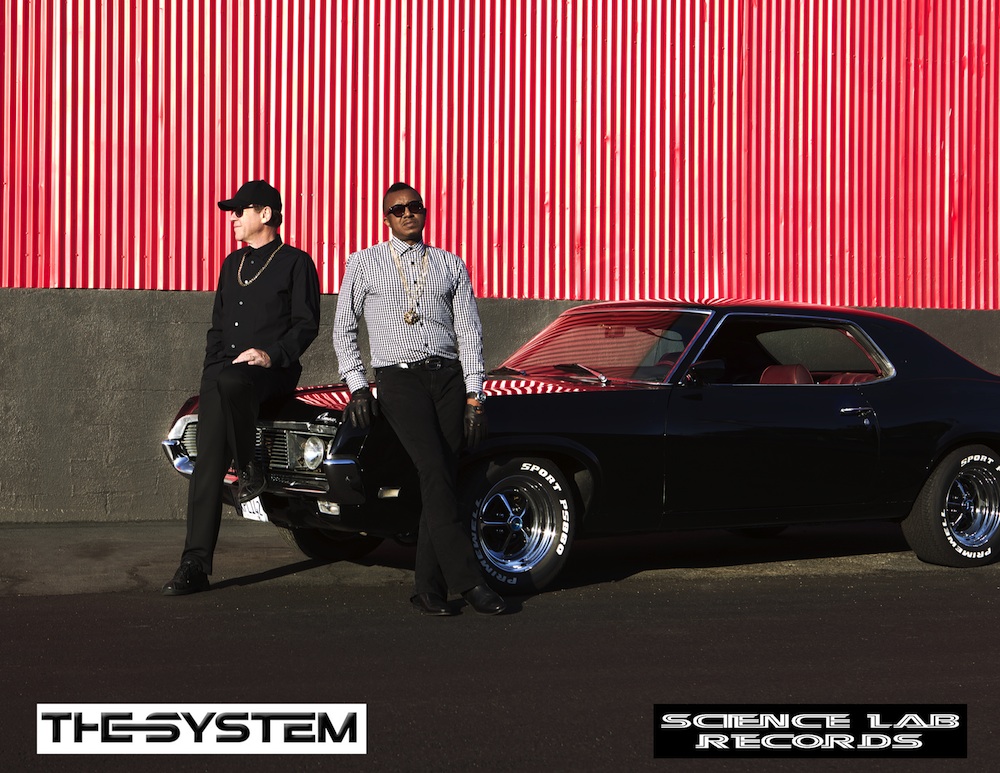 Let’s rewind thirty years back to 1983 – it was a time when keyboard maven David Frank and singer Mic Murphy in the guise of The System were beginning to reshape the sound of contemporary R&B with a futuristic, mechanised, sound that comprised synthesisers, sequencers and robotic drum machine beats. ‘You Are In My System’ was the duo’s debut hit and it wasn’t long before their distinctive production sound was sought after by the likes of Chaka Khan, Phil Collins, Ashford & Simpson, Scritti Politti, Mtume, Angela Bofill and many others.

The duo’s music also appeared on some classic 80s movie soundtracks – such as ‘Beat Street,’ as well as the Eddie Murphy-starring films, ‘Beverley Hills Cop,’ and ‘Coming To America’ –  and then in 1987, The System scored a US chart-topper with their hypnotic beat ballad, ‘Don’t Disturb This Groove.’  But two years later, in 1989 and following the release of their fifth album, ‘Rhythm & Romance,’ the System called it a day. Mic Murphy went on to release a solo album (1991’s ‘Touch’ for Atlantic) while David Frank moved into session and production work (his credits include Christina Aguilera’s 1999 hit, ‘Genie In A Bottle’).

The pair reconvened for 2000’s ‘ESP’ but then followed another fallow period. Now, though, the groundbreaking duo is back with their first long player in over a decade – ‘System Overload’ on their own Science Lab label. They recently found time to answer questions posed by SJF’s System addict, Charles Waring, about various aspects of their career and of course, the all-important new album…

It’s been twelve years since the last System album – why was The System on hold for such a long time and what brought you both back together in the studio again?

MM: A real desire to explore new music with David and challenge our musical abilities in this new framework of time, style and competition. Thought it was time. We love a good challenge.

DF: We were probably both so wrapped up in doing our own things that we forgot how much we valued what we had done together. It was somehow just a perfect fit. Speaking for myself, I did so much music with other people and though it served the purpose well and I am proud of it all, there is nothing that quite matches The System and the compositions I have done with Mic Murphy. It is, to me, my finest hour. So, when we started to talk about about “what if we made another album” we just tried it out and found that it still worked for us – the magic that is.

How did it feel to be creating new music again together?

DF: It just worked right away. This quote conveys the feeling:

Information is not knowledge.

Knowledge is not wisdom.

Wisdom is not truth.

Truth is not beauty.

Beauty is not love.

Love is not music.

Music is the BEST

When Mic and I start making music it’s the best!!

MM: It was actually easier than I thought it would be although there were the added challenges of distance (David relocated to LA in 1993 and I am still a native New Yorker) and getting to know each other musically intimately again. You go into it with certain preconceptions of who you were before and the idea that you’ve changed your spots.

How would you describe the musical chemistry that you and David have when you collaborate?

MM: It’s compromise without a mediator and sometimes trial by fire; it’s Darwinism and natural selection; it’s a distillation of ideas to create something that is akin to gene-splicing. It always mutates into something different than what we started.

How would you describe ‘System Overload’ – and how does it compare with what you’ve done before?

DF: I think it’s a fantastically consistent collection. I’m proud of every song through and through. No gaps, no regrets. I think collectively it is as good if not better than our past work.

MM: ‘System Overload’ has elements of many things we’ve done before. We used many similar compounds and chemicals; soul, electronics, funk rhythms, emotional concepts, so the result comes up System!!!

The System records have always had a unique sound and musical character – how important was it to stay true to your sound and preserve your sonic identity with the new album?

DF: It literally just comes out naturally that way. We both write lots of ideas and the final line up always just sounds like The System. Honestly even the songs that we don’t finish or don’t use always have a character consistent with our sound. They are just not as good in some way.

MM: It’s important but no matter how hard we try when we make music together it always somehow ends up sounding like us.

What prompted you to rework your biggest hit, ‘Don’t Disturb This Groove,’ on the new album?

DF: It was an ‘X-periment.’ Just to see if it could be done. It took a long time to finish it.  Many people like it and it’s gotten a fair amount of play so far. It’s not meant to replace the original.

MM: That was Mr Frank’s idea and brainchild. I did not warm up to the idea for quite a while… but he really brought out something different in his musical approach.

Going right back to the birth of The System in ’82, what circumstances led both of you to join forces?

MM: Actually quite by proximity and necessity. We both worked together in Kleeer – he as a keyboard sideman and I was moonlighting as road manager and looking for a musical collaborator having been in a few really good local NYC Bands including Jack Sass band. We couldn’t get record deal so I thought I’d try it from the other side of the business to make connections that way. David had some bartered studio time and played me a track that blew my head off – ‘It’s Passion’ – and I knew I had to get on it.

You had a distinctive sound – was that by design or by accident?

DF: Both. It came from our development as musicians. Never gave it any calculating thought about success. Just worked and worked and tried new techniques, chords, instruments. Lot’s of listening and analyzing other music from very old to the newest of the new. All styles.

MM: It truly was just what happened when you stirred the two of us around in the pot. I was a funk rocker and loving the music coming out of the UK at that time; Soft Cell, Gary Numan, Depeche Mode, Ultravox, Roxy Music, Spandau Ballet, Phil Collins and David was a big fan of R&B and funk & jazz…Parliament, Zapp and R&B that he was listening in Boston.