THE OTHER KYLIE; The Kylie Auldist interview. 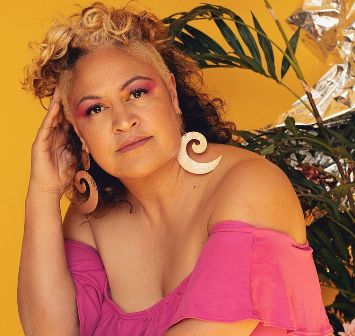 Aussie soulstress KYLIE AULDIST provided the heartfelt vocals on 2016’s beguiling ‘This Girl’ from fellow antipodeans, Cookin’ on 3 Burners and when Kungs got their hands on it, the tune went ballistic!  It topped almost every pop chart, was featured in TV shows, adverts and films and has achieved over 1 billion streams and that figure’s still climbing. Genuine soul folk, however, know there’s more to Ms A than that one tune. They know all about her other wonderful collaborations with the Burners and the Bamboos, while her own solo albums (she’s released four) were enthusiastically received. Kylie’s got a new album on the way – ‘THIS IS WHAT HAPPINESS LOOKS LIKE’(due October 9th on Soul Bank Music) – and sneak previews to soul tastemakers suggest that this could be the one  to bring Ms Auldist to a wider, more mainstream audience and, for sure, prove that she’s much, much more than “the other Kylie”. So, what better time to find out more. Respecting social distancing – never mind two metres, we were over 12, 000 miles apart, we caught up with Kylie and started with the obvious request for some background…..

Well, I came to the Melbourne from the small country town of Hay which is located a long way from anywhere in the middle of New South Wales, Australia. My family still live and farm there on the Murrumbidgee River.  Living in Melbourne I joined all different types of bands until my Cinderella moment working with The Bamboos – that shoe finally fitted. Then on my first tour of the UK and Europe with them in 2007 I was signed to Tru Thoughts for 3 solo soul albums. During this time I also sang with my own band and that other top Aussie outfit, Cookin’ on 3 Burners. I then moved to Freestyle Records for my ‘Family Tree’ album, at the same time that Cookin’ On 3 Burners song (which I had sung on 8 years earlier!) was remixed by Kungs and turned into a global phenomenon. Now I am with Soul Bank Music (K7) for my new electro-flavoured  soul album ‘This is What Happiness Looks Like’ and it feels like I am finally growing up, taking charge and making music that feels like me. On a non musical front I’m a wife and mother to two rather tall and loud boys who think their mum is completely uncool and hopeless at social media!

Of all the music genres out there – why was soul your preference?   Soul wasn’t my first preference. It was simply the music that suited my voice. I was raised on a mixture of music, ranging from country, to blues, jazz and the Beatles. I grew into disco, boogie, funk and electro, with a penchant for great bass lines and sexy dance beats. Soul was probably the cake that resulted from all those ingredients. I was invited to write with Lance Ferguson of the Bamboos, and he taught me a lot about the different types of soul music. But it’s the ‘Meters’ style breakbeats sound and deep funk that I really love.

OK, so the Meters…. but who else are your soul influences/heroes/heroines?   Looking back, I can see that I always loved singers and dancing. My mum brought home ‘The Best of Silver Convention’ from the city one day when I was a teenager and a whole world seemed to open up.  My dad then introduced me to Aretha Franklin, Renee Geyer and Janis Joplin along with Marvin Gaye and Mama Cass. I discovered Donna Summer, Chaka Khan and Etta James myself in my teens and still listen to them. I also love Gladys Knight and the Pips, I love that the bvs on Midnight Train to Georgia got a Grammy!

Is there a decent soul scene in Australia?       It’s hard to describe a ‘scene’ as such. The Australian music scene is a very small pond and for the most part soul has been an even smaller part of that. There are some fabulous funk and soul bands in Australia and for a while there (2006 – 2016) the scene was in rude health in an underground sense but like any scene other things come along and take over.  It feels like perhaps in a live sense it may not be enjoying the same attention it once did.  The great thing about soul music though is it’s such great music that it gets rediscovered generationally so it will have its moment in the sun again as a new generation comes through and discovers its delights.

… and what about now with the damn pandemic and all that?   I am from Melbourne Victoria so we are at the epicentre of the pandemic in Australia. Which means no gigs at all. No anything really. But I’m happy with that if it means we stay safe and get the virus to a manageable state for our health care system. I’m a family and community minded person so I’m down with whatever keeps loved ones safe. There’s a lot of carry on about the economy, but seriously how much landfill can you sell to dead people?  Plus I’m secretly enjoying gardening, cooking and generally catching up on all the things none of us ever have time for!

So with the pandemic how did you come to be able to record a whole new album?   I have a great team of musicians, engineers and producers that were busy writing and recording with me just before the hammer fell. We also engaged a fabulous film crew to make us 3 live videos before lockdown. I’m lucky to have a wonderful team at Soul Bank Music & K7 who are working tirelessly behind the scenes on promotion and publicity and need to be thanked now for keeping the music alive and relevant.

Tell us about the new collection then….   This is probably the shortest album I’ve done with only 9 tracks, but we (my co writer Warren Hunter and I) thought it was better to get it out than to wait until the next time we could record. The influence of Graeme Pogson (Bamboos, GL, Mondo Freaks) is obvious on this album after he wrote ‘Family Tree’ with myself and Lance Ferguson, he is a boogie aficionado and plays in a duo called GL which goes deep down this path.  It’s the music I grew up with and writing and playing it feels like coming home. You know I’m really happy with the songs. They all have a life of their own but are very much in the same vein of ‘dance wherever you’re standing’! Positive and strong!

Why that interesting title? ‘This Is What Happiness Look Like’    When you’re young you try to like the same music your friends do, then when you have a record deal you try to write the songs they would like you to.  I’m at a stage in my career where I don’t really care what anyone thinks or wants from me! No use pretending I’m going to rule the world so why not just enjoy myself. This is music that flowed effortlessly with no pressure or stress. The title is a reflection of that process.

What kind of sound were you aiming for?    80s Soul & Boogie! Slick, tasty and danceable.

What particular tracks would you like to draw our attention to?  That’s like saying which of your kids is your favourite!! Well I suppose I do quite like ‘LYB (Love You Better)’ and ‘I Get it!’ I like Waz’s bass playing in ‘LYB’ and ‘I Get It’ is a good party track/Saturday morning hangover cure!!

Given the pandemic, what are your hopes for the set? And indeed the future of your career?       I’m happy to have come this far, certainly I’ve never had high hopes in the past and I don’t think I should change a pattern of a lifetime!! I’m happy with the amount of air time the singles have had thus far and if that were to continue I would be happy. The people I created and play the songs with all enjoy playing music with me and for that I am deeply grateful.  I’m sad that I can’t play live at the moment because music is really it’s own reward.  Hopefully at some stage we can have a pathway that leads to playing to a packed dance floor again.

Finally a tricky one… is it difficult for an Aussie to establish proper soul credibility?   Right …but what is proper soul credibility? It’s difficult for an Australian to establish a career of any type in music due to the size of the population. There has been a hard core group of people that are very supportive of both the Bamboos, Cookin on 3 Burners & my solo music.  Artists from across the globe do reach out for collaborations & more recently younger singers also seem to want to pick my brains about my experiences so in some way you could perhaps say I have some credibility but I take all of that with a grain of salt.   Realistically it’s more important for me to be happy with what I’m doing at the time. I just love singing.  Anything that flows on from that is a bonus.

KYLIE AULDIST: ‘THIS IS WHAT HAPPINESS LOOKS LIKE’ released October 9th on Soul Bank Music