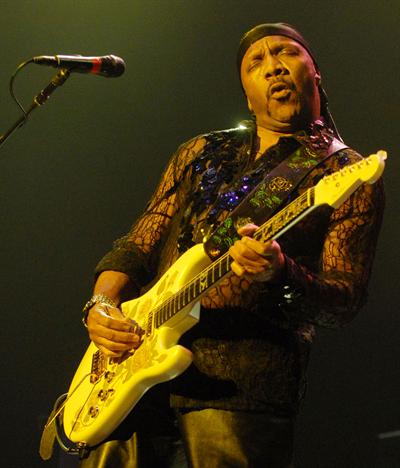 Ernie Isley was, by his own admission, precociously talented and an early starter. He was just fourteen years old when he played his first live gig with his three elder brothers Ronald, Rudolph, and O’Kelly, better known as the Isley Brothers, who’d lit up the US charts with ‘Shout!’ and ‘Twist & Shout.’ The year was 1967 and schoolboy Ernie was recruited to play drums for the sibling trio’s backing band at a gig playing alongside their then label mates and Motown hit sirens Martha & The Vandellas in Philly. The memory of the event is indelibly etched upon his mind. “Martha & the Vandellas didn’t have a drummer on the same show so I wound up playing drums behind them on ‘Dancing In The Street’ and ‘Heat Wave’ and all of that,” says Ernie, his voice still betraying a sense of disbelief. Things got even better after the gig was over: “My brother Kelly handed me a fifty dollar note and said go get a hot dog and then I went through the back stage doors and all of these girls of my same age started screaming at me as if I was Justin Bieber.” It was an epiphany-like moment for Ernie Isley that he would never forget: a point at which his fate was sealed and he would be destined to become a musician.

Two years later, in 1969, Ernie had moved from drums to bass and made his first recording with his brothers called ‘It’s Your Thing‘ for the Isley’s own T-Neck label. It was a massive, game-changing hit for the group, who had quit Motown a year earlier. In the early ’70s the Isleys had begun experimenting by fusing and funk soul with rock and in 1973 – by which time Ernie had started playing guitar in a flamboyant Hendrix-style – the brothers released the groundbreaking ‘3+3‘ album where Ernie, his brother Marvin and Rudolph’s brother-in-law, keyboardist Chris Jasper, officially joined to make the Isleys a six-piece, self-contained band. The album, featuring their new rock-tinged sound (and Ernie’s searing lead guitar lines) spawned the singles ‘That Lady’ and ‘Summer Breeze,’ which catapulted the group originally from Cincinnati into the world arena. In the rest of that decade, the band released album after classic album, which all appear bolstered with bonus tracks on the forthcoming box set on Sony called ‘The RCA Victor and T-Neck Album Masters (1959-1983),’ which traces the band’s footsteps during four decades of music-making.

In an exclusive interview, Ernie Isley – whose distinctive guitar sound was such an important component in the band’s success – talks to SJF’s Charles Waring about the band’s long and storied career and recalls key moments in their history…

The Isley Brothers’ career is celebrated by a new box set. What are your thoughts on it?

It’s fantastic. It’s like an Isley Brothers musical encyclopedia that somebody could have if they’re looking to get an understanding about our career and how it stretched all those years for quite a long time.

What emotions come to the surface when you hear the music?

When I go back and listen it’s as if it was a photo album except it’s got sounds it and automatically transports me back in time. When I hear the ‘Shout’ album I’m seven years old. When I hear ‘Twist and Shout’ or something like that I’m ten. Those two songs predate the Beatles being introduced to America. Obviously they’re important songs, everybody knows them.

What do you think was the most important album that you recorded in terms of the group’s career?

There will be more than one. Certainly, ‘Shout,’ is the first and then the one in ’69, ‘It’s Your Thing.’ I played bass on that album. I was sixteen at the time it was recorded. And certainly ‘3+3’ and everything else that followed were important too. If you’re really trying to connect the dots you have to follow each album more or less as it happened chronologically and then obviously, the career has gone beyond 1983. So you’d have to start with this anthology and then go beyond it because the career has stretched beyond those years.

You were only seven when ‘Shout’ came out in 1959. What do you remember about your older brothers in those days?

It was exciting to hear their song on the radio. Cincinnati was certainly proud to have a group in rock ‘n’ roll music and a lot of people knew our family and knew all the brothers. They might not have necessarily known Marvin and I because we came along later but because we were all family and because they were the older brothers it was an exciting time. It was certainly exciting to hear them on the radio and perform live. The song ‘Shout’ from its very beginning was a real showstopper of a song and because of the way they were, in terms of their live performance, it made them an extremely difficult act to follow. So they wound up being the headliners on shows because of that song.

How much did you want to be like them when you were that age? Was it inevitable that you would join your brothers in the band?

No, because when you’re that little you’ve got school and you’ve got bicycles. I had baseball and other interests as a kid and music, of course, was in there but when you’re a kid and you start to get exposed to the world there are all kinds of interesting and exciting things. Some of them maybe you don’t discover right away. My brothers were in the music business, and I thought about it, but I didn’t start playing drums until I was twelve. So it was like the whole process of growing up and coming of age but it was always exciting to go to a show or watch the band rehearsing. They stopped quite a few softball and kickball games in the backyard when they were rehearsing. When we were with our friends, we’d stop playing and run into the house into the basement where my brothers rehearsed. At one point you’d run into the basement and there was a left-handed guitar player down there… It was exciting.

That left-handed guitar player… It wasn’t a certain Mr Jimi Hendrix was it?

Yeah. It was very exciting.

At what point did you feel that you wanted to join the band?

Probably around the age of twelve when I picked up some drumsticks and sat behind the drum kit for the first time. The drummer set the kit up. Of course, I didn’t know a thing about it so he set up the kit with the kick drum, the floor tom, and a couple of mid-toms and a cymbal to the left and a cymbal to the right, and a hi hat. He said your left foot goes here and your right foot goes here and your right hand does this and your left hand does that. I said I can’t do that and he started laughing and said sure, you can do it. But it’s one thing to be observing it and another to be doing it. It was like driving a car. The first time you’re behind the wheel it’s like, oh-oh, I’m supposed to do what exactly? And then you get the instructions and you sort of learn as you go along but it turned out that I was a quick learner and I played my first live gig on drums when I was fourteen in Philadelphia.

Was that playing with your brothers?

Yeah. And Martha and the Vandellas didn’t have a drummer on the same show so I wound up playing drums behind them on ‘Dancing In The Street’ and ‘Heat Wave’ and all of that. After the Isley Brothers had performed I still had on my stage clothes. I was fourteen years old and my brother Kelly handed me a fifty dollar note and said go get a hot dog. I thought wow, he’s given me fifty dollar bill, and I went through the back stage doors and all of these girls of my same age started screaming at me as if I was Justin Bieber. (Imitates screaming noise). “Ah, you played so well, you’re so cute! What’s his name? Are you at school down here?” I said to myself: man, I need to move to Philly ‘cos I’d never got that kind of action in my school back in New Jersey. It was an exciting night.

Yeah, it was like: do this, if you can, because it was an eye-opening experience.