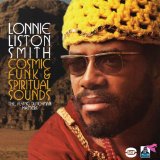 How did you come to work with Pharaoh Sanders?

I first heard Pharaoh with ‘Trane’ and then what happened I guess was after ‘Trane’ passed it was time for Pharaoh to do his own record. We all were all doing different things with our instruments. I wanted more sounds out of the acoustic piano because you’ve only got 10 fingers. So I was thinking how can I get more sounds out of it? Sometimes I would just use my whole forearm – not banging though, still making it musical. Pharaoh could sound like he was playing two or three different notes at one time. I said to him, “wow, you’re doing something different with your horn” and he said, “well, you’re doing something different with your piano.” And then we heard (singer) Leon Thomas yodelling and we said “oh-oh.” That was it and we just got together. The first album was ‘Karma’ and I arranged a song called ‘The House Of The Lord’ and ‘The Creator Has A Master Plan.’ So actually we did the whole record and then Bob Thiele called me back to the studio. There are two piano tracks on that record ‘Karma’ because Bob said “I want you to do another piano part and fill it in and make it more massive and large.” So I overdubbed another grand piano – you can hear it at the very beginning because remember, you can hear me playing the strings – zing, zing! But I missed it – I was trying to catch them so that they would sound like one piano. You might hear ‘zing zing’ ‘cos I missed it, I couldn’t catch it. (Laughs).

What did you learn from working with Pharaoh?

Well, with Pharaoh it was so organic ‘cos we didn’t rehearse that much – we’d just go and play. You had to really be creative and stretch out. We were really stretching out every night. When Pharaoh was with Trane they would stay right out there but with Pharaoh, he said: “let’s start at this point and then we just go as far as we want to go but then we always bring it back to where we started because you don’t want to leave the audience out there. Don’t just leave them out there in space.” Then people start relating to it because you bring them back and it becomes like a regular song at the end… and the beginning.

Then you got to work with Miles Davis in the early ’70s. How did you get to join his band?

Miles came across other musicians who knew your name or that would recommend you. A good example of this is that I discovered Marcus Miller when he was about 16 years old. I let Marcus do his thing but when Miles was getting ready to hire Marcus, he called me and he said – you know I wish I could talk like Miles, some people can (laughs): “what can you tell me about Marcus?” I got all excited and said “oh, man, it’s going to work because you are twins” but Miles got upset when I said that because he didn’t know what I was talking about. He then called me back and said “what’s this twin mess?” in the raspy way he talked. I said “Miles, you’re a Gemini and Marcus is a Gemini – so you’re going to understand each other.” And look what happened with ‘Tutu.’ So Miles had asked somebody about me and then he called me.

But the first recording with Miles I didn’t know what to do because I walked in the studio and saw three keyboards. So I figured I was waiting for my turn to play (laughs). Herbie (Hancock) was on one, and another guy from Baltimore, Howard Williams, was on another one. And I was standing there and Miles was looking at me. He was staring. Miles was always candid – he never played around. He said: “what the freak are you standing up against the wall for?” I said: “I’m waiting for my turn to play.” He just looked at me like I was crazy and said: “man, we’re all playing together.” I’d never done that before. So I had to listen to Herbie to make sure we stayed out of each other’s way.

That’s another story. We all had Fender Rhodes and I said now I’m with Miles, I’m going to get into this Fender Rhodes for the first time. Miles had put the band together – there was Mtume, and Dave Liebman and all. This was his road band and I was playing the keyboards. I go by Miles’ house. I looked for the piano and I didn’t see it. I said “Miles, where’s the electric piano, the Fender Rhodes? I don’t see it.” Miles said: “Oh, I’m tired of that.” He got tired of that sound. He’d get mad – he wanted something creative every night. He had Joe Zawinul playing electric piano, Herbie playing electric piano, Chick Corea playing electric piano. The Japanese had just given him a Yamaha electric organ. It looked like a regular electric piano but it was an organ. He said: “I want that sound. I want to hear different sounds.” I said “Miles I’ve never played one of these before.” He said: “oh, that’s good.” I said: “Miles, can I take it home to practice?” He said: “no.” So I had to be creative and learn on the gig. He knew that I had to do that. I had to be creative – I had no other choice. I’d never played one before. But it all worked out.

What did you learn from Miles?

Oh, Miles makes you stronger. You learn how to be yourself ‘cos Miles, he’s candid.He had a sense of knowing what every musician in the band needed – whether on stage or offstage. He would never tell you what to play. At that time he had stopped playing what you call the regular standards. He was experimenting. He wanted to see what you would come up with. He wanted sounds and not necessarily a particular chord. So you had to figure out things. But he was funny ‘cos he had all these pedals hooked up to his horn and that’s how I came up with my sound with my electric band. I said let me hook up all these same pedals that Miles had; I’m going to hook them up to the electric piano, and it worked. But he had pedals on the electric organ and he played them with his left foot but I always wanted to play with my right foot, you know, the pedal, and so I’d be playing and he would kick the pedal over to my left foot… (Laughs) but it’s all good!

What do you recall about the sessions for those?

On the sessions there was just an idea and everyone kept adding and building from that. All these different things were going on but when they mixed it, it really made sense. Columbia kept leaving my name off ‘On The Corner’ but they finally put out the complete sessions in a gold box or something and they finally gave me the proper credit and the picture and everything. I said okay, finally.

You worked with Argentine saxophonist, Gato Barbieri. What was he like to work with?

Oh, Gato, that was fun. He was married to Michelle. Gato could speak English but he didn’t want to speak English. He used an interpreter. And that was always fun. I went on tour with him and it was good because he had Naná Vasconcelos on percussion and Nana’s from Brazil so he would say “okay, this is what they do in São Paulo, this is what they do in Rio, and he would take me all over Brazil percussion-wise.” Then we went to Rome and Gato introduced me to (Italian film director) Bertolucci ‘cos at that time Bertolucci wanted Gato to do the soundtrack to ‘Last Tango in Paris.’ So I met Bertolucci and we all hung out and the next thing I know, ‘Last Tango in Paris’ became a major hit. So that was a good experience.

Going back to your own albums, you’ve been sampled by many people over the years, haven’t you?

Oh Charles, that’s amazing. ‘Expansions’ I understand; everybody’s sampled that. But what is blowing my mind is these young kids are going crazy all over the world over a song I did years ago – no drums, no nothing, just keyboards, called ‘A Garden Of Peace.’

That’s a beautiful piece, that.

Okay, see, what’s surprising me now is that I understand when you’re saying that: it’s a beautiful piece. But when I talk to 16 or 17 or 18 year olds and they say the same exact thing you just said that surprises me because they’re kids and they’re full of energy and they want a beat. But they’re all saying the same thing: “man, that’s a beautiful piece.” And I say: “wow, I’m really impressed with that.” Jay-Z sampled it on ‘Dead Presidents’ and Mary J (Blige) won a Grammy with ‘Take Me As I Am’ which also sampled ‘A Garden Of Peace.’ All over the world people are playing ‘A Garden Of Peace.’

How does it feel to be sampled?

‘COSMIC FUNK & SPIRITUAL SOUNDS’ IS OUT NOW VIA BGP RECORDS.