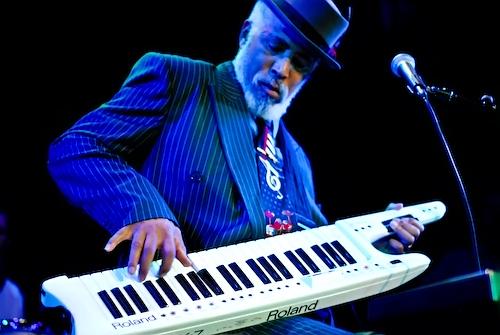 Multi-instrumentalist, SHAD HARRIS – who these days mostly sings while playing a ‘keytar’ (a portable keyboard)  – is well-known in California for leading a group called The Groovenators, a quartet that dates back to 2007 and plays a funky brand of old school blues. Now sixty-six, Harris’s CV includes some impressive names – among them Horace Silver, Etta James, Eddie Harris, Hank Mobley, Charlie Musselwhite, and Tommy Castro – and recently he found time to speak about his life and music to SJF’s US correspondent, John Wisniewski…

When did you begin playing music, Shad?

I began my career in 1966. I began playing around 5 years old. When I got to the fifth grade I started clarinet lessons from then on I played in the school band wherever I went to school.
My Dad took my brother and me to his hometown of St. Petersburg, Florida, in 1959 to stay with his Mom and meet the rest of our family. I met his younger brother, Uncle Rob, who was the first one of my Dad’s siblings to go to and graduate from college. He was a music major and he played trombone, bass, and piano. Under his tutelage my skills improved and when I told him I wanted to play the drums, he said okay, but first I would have to learn to play the piano. So I learned enough to do a recital at church and then I still wanted to play the drums so even though I wasn’t actually old enough, I got in the 16th Street Jr. High School marching band in St. Petersburg (my Uncle and the band director were good friends). After a full year in Florida, we came back to Oakland. I started Junior High in Oakland and that’s when I got into my first band. I played the drums using a drumset that I’d pieced together from the school’s orchestral equipment. All through Junior High I played in the school orchestra, and with several configurations of Junior High School rock and roll bands. I still played the clarinet also. When I finally got to high school I met a bigger pool of musicians and started playing the drums more. In the summer of 1966, a couple of classmates and I form a jazz standards quartet and I did my first real gig. My dad rented my first real drumset and I was “on my way”… The rest is still happening.

Why does the language or sound of blues and soul music,  communicate so much to its listeners?

It’s not just blues music and soul music, it’s music! Music is real true magic. Communication is essential to humanity. How we (humans) communicate with each other is “where the rubber meets the road.” Music is a universally understood language. The delineations and labels are for aesthetics and commerce. The same sound that makes a man cry about losing his woman on the east coast of the USA can and does make another one do the same thing in the southern most part of South America or China or wherever, because sound is powerful. But I know what you mean, and the answer to your question is actually the first part of the question. It’s the language. The stories. The blues is the American experience expressed with music. Art Blakey said to me, “Shad, it’s all the blues!” What I take that to mean is, music is all related and the different labels that are attached to the different presentations are for purposes of identification only. We all grow up with a different “soundtrack” and contained in every style or genre there are stories that listeners connect with or not. The same fervour expressed by blues music lovers is duplicated by “fans” of every other style or genre of music.

You grew up listening to whatever was available to you, that’s what you will probably like listening to. Marketers know this and give the music styles, labels and quantify everything so it can be commercialized. That’s capitalism… nothing wrong with that but it’s a “fact” that gets distorted. The distortion manifests as “fan-mania” and thus sales. If you are a real music lover then you probably have an eclectic palette when it comes to what you listen to, but even the most “liberal listeners” usually have “favorites”. Blues, rhythm and blues, jazz, country, and gospel musics all share a “common musical structure” and the stories each style of music tells are all related and cover the ethos and pathos of humanity from various perspectives.

One reason blues music is so “accessible” is because it’s basic structure is simple. And it’s very adaptable. I could go on about stuff like this for a long time but I hope I’ve given you an adequate answer.

Do you improvise when you work out your latest compositions, for the new album? Does everyone in the group pitch ideas?

All musical endeavours have a component of collaboration unless you’re working solo. So, “pitching ideas” is always going to happen, at least one hopes so. Improvising is a bit different, though, because the songwriter might have a specific part that he or she wants to hear and it probably will be right where you think it’s a good spot for improv. What I generally do for my songs is work out all the parts I want to hear and then present the “draft version” of the song to the band and we work it into a complete song. The process is not real difficult if the song’s not complicated, and most of the stuff I write is pretty simple, which is not to be confused with easy.

When I am learning a song written by someone else, I try to not over-think. That is, I don’t want to “gravitate to a position,” or develop an opinion about the song. I try to let the song guide me through the parts. If there’s nothing specific that the songwriter wants to hear, I’m going to “improvise” until I find the part that works.

Of all the performers that you met or played alongside, Shad, were there any that really made an impression on you?

Most of the players with whom I have played have “made an impression” on me and most often it’s been an impression that’s due to their musical ability or performance talent. Whenever I had the opportunity to “rub shoulders” with well-known artists, I enjoyed the moment. I lived the moment. Then the moment was over. The impressions of those moments are in my head forever, good or bad.

As for real influential musicians in my life, the lessons I learned from whoever they were and are the backbone of who I am today. The important names to me won’t have the same impact as the one time I got to play with “a well-known artist”. And don’t misunderstand me, playing with a well-known artist is always a boon! Especially when said artist speaks your dialect musically! But the ones who made a genuine impression on me are not famous per se.

My uncle, Robert Harris – ‘Party Rob’ – instilled the desire. His friendship with the community of musicians on his level was great for me, 10-year-old Squeaky Harris from California! My uncle and the Adderley Brothers would more than a couple of times turn my Grandmother’s front porch into a rehearsal/jam session. I got the chance to “jam” with my uncle’s crew because the emphasis was on teaching. Not just me, but everyone teaching everyone else. I was introduced to the fraternity of musicians.

I was fortunate to meet and be tutored by a succession of influential music teachers. Smiley Winters, Ed Kelly, and William Bell taught me Music. And subsequent years in the “Business of the Working Musician,” have made it so I can point to many who have impacted my life. Band leader Johnny Heartsman was a big influence on how I approached my craft. Ron Thompson taught me how to be on the road. Norman Lankford was the last big brother figure in my life, he taught me maturity. Those are a few of the musicians, that have left their impression.

What are you working on these days? Will you record a solo album?

I’m working with George Whitsell (The Sharps, Crazy Horse). We’ve recorded a bunch of really good tracks. A couple of CDs already and George is always writing more songs. We play a few gigs to keep in shape. I also play two gigs a month at The Saloon, the World Famous San Francisco, North Beach institution with The Doorslammers, the late Johnny Nitro’s backup band. We’ve recorded and we sound good so a CD is in our future. I also have different configurations of my own presentation; The Shad Harris Trio or The Groovenators. The Groovenators is really Gary Hamilton and me. We just add bass and drums and do ’60s style rhythm and blues. It’s a dance band whereas the Trio is upright bass, jazz kit drums where I can focus more on telling stories. A solo album would be a nice project and I have recorded in my own studio. So we’ll see.