SYL JOHNSON AND THE REBIRTH OF SOUL 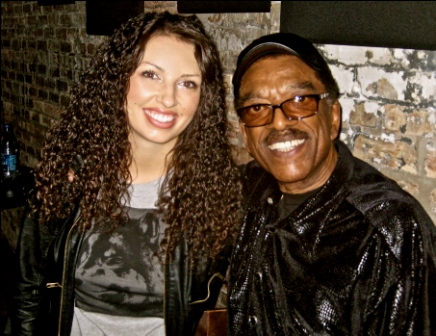 Mississippi’s SYL JOHNSON (born SYLVESTER THOMPSON in 1938) doesn’t mind anyone calling him a soul veteran. His music career began in the mid-fifties when he cut his teeth playing in the bands of people like MAGIC SAM, JUNIOR WELLS and JIMMY REED. He made his solo recording debut in 1959 on the Federal label, then in the mid sixties SYL began recording for Twinight Records of Chicago before WILLIE MITCHELL eventually took him to Hi. After the Hi years ended, JOHNSON produced two LPs for his own Shama label then sometimes in the 80s, he started a fast-food fish restaurant business but soul music was never far away and he continued to play and record… his last official release being collaboration with his brother, JIMMY, in2002. Now the man’s back! Not only is there to be a box set retrospective of his work, but SYL is also working with Australian soul diva MELLOW-D on a project that he hopes will spark a renaissance of real soul music. www.soulandjazzandfunk.com  needed to know more. We caught up with SYL and began by asking him what exactly he’d been doing since that 2002 album….

I’ve been very, very busy travelling around the world to places including Russia, Turkey, Greece, Australia, and then there’s the law suits I’m working on against people like CYPRESS HILL, MICHAEL JACKSON, WILL SMITH, TUPAC, NWA …just to name a few. Most of the cases are about illegal Sound Recording Piracy, but my first big case was in Illinois to recapture all of my Twilight/Twinight Masters; it was very successful. In another case I took out a suit against JEFFERSON AIRPLANE regarding my song “Dresses Too Short”; they’d ripped it off and tried to change the name. They eventually settled out of court in my favour and assigned their “You Wear Your Dresses Too Short” to me and paid me back royalties that had been collected. They treated me very well! Then there was the big one! SYL JOHNSON versus MICHAEL JACKSON, WILL SMITH, TUPAC SHAKUR, NWA and others along with the labels Sony BMG, Universal Music, Capitol Records and Zomba regarding my song “Different Strokes”. I figured it had been illegally sampled by all of them. Just before MICHAEL JACKSON passed, they settled out of court; again very favourable to us. Then there is a little issue with CYPRESS HILL. They stole my entire track “Is It Because I’m Black”. Then, minus the vocal, they placed it on their album entitled “Black Sunday”. First they called it “Interlude” and then changed it to “Lockdown”. We are now in the Appellate Court Process in the Northern District of Illinois. We expect great results.

Clearly you’ve been very busy … so how come you’re now working with an Australian singer called MELLOW-D. How did you find her and why are you so convinced about her soul potential?

Well her real name is MELODY WHITTLE and she was a backup singer on one of the tours I did in Australia. She was doing this little laugh that MINNIE RIPERTON did on the intro of “Different Strokes” and she also sang a tune I made called “Straight Love No Chaser”. She hit some extremely high notes that were just piercing to my ears. One day during rehearsal, I showed her and the band one of my newer songs that I had written – “If I Could Be An Angel” – and they did it perfectly. From there I had dinner with her and her parents who were also musically talented and they all loved the song. We then started communicating through e-mail and MP3s. I sent her several other songs to check her out and she just nailed them all. She has an extremely good sounding voice. We established a musical bond from that point and she expressed her love and passion for old school soul music such as ARETHA FRANKLIN, GLADYS KNIGHT, PATTI LABELLE, MARVIN GAYE and yours truly SYL JOHNSON. That is the type of music that she wanted to do and I knew it was the type of music that I could produce.

You’re going to call her debut album ‘The Rebirth Of Soul’…. does that mean you think that soul has died… that the soul music you made – and presumably believe in – no longer exists?

Quite honestly yes! There is hardly anyone producing authentic soul today. When I read my daughter, DR. SYLEECIA THOMPSON’S Book “Rhythm Without Blues” I realized there was something real deep about going on. If you turn back to the music of the mid 70’s you’ll find that Disco followed by Rap in the 80’s has stripped the “Rhythm” from the “Blues”. Old school soul was based on combining Rhythm with Blues; this is why they originally called it R& B. Some people can still do it. I’ve been recording with a fantastic group called THE DAP KINGS and I would say that they are one of the few young groups that do a decent job on producing that type of old school soul music.

Tell us more about your work with the DAP KINGS…

I recently recorded two songs with them for the Dap Tone Label; they’re about the oil spill tragedy in the Gulf and all of the proceeds will be donated to the people who were affected by the disaster.

Back to “The Rebirth Of Soul” now. I notice that you’re recording in analogue and the songs that are already available are covers. Why?

From experience I know that music has the truest, warmest sound when created through analogue tape. There is nothing synthetic about analogue and that’s what I like about it. The two songs that are out there are “Selfish One” and “Love Makes A Woman”. They were chosen because MELLOW-D wanted to do Chicago style soul and I’d been friends with both JACKIE (ROSS) and BARBARA (ACKLIN) back in Chicago. We did write plenty of new songs though and, of course, we are still currently recording.

When will the album be released?

“The Rebirth Of Soul”is expected to be released by Thanksgiving 2010. We want to win a Grammy!!!! And remember, it also features some top class soul musicians like BERNARD REED on bass, WILLIE HENDERSON on baritone, MORRIS JENNINGS (drums), KENNY ANDERSON (trumpet) and BILL MCFARLAND our trombonist and the whole thing’s arranged by TOM WASHINGTON.

Looking back on your own distinguished career now – what would you say has been your greatest achievement?

It has to be recording songs like “Is It Because I’m Black” and “Different Strokes”, which according to the Samples Index has been bigger even than “Billie Jean”. To me that thing’s been like the National Anthem”. Need I say more???

Signing a contract with Hi Records! During my time at Hi I was no more than a shadow of AL GREEN. Don’t get me wrong – AL GREEN was a very nice person and WILLIE MITCHELL was as well. However WILLIE didn’t know my style all that well in the same way that he knew what AL GREEN could do, so- maybe naturally – his focus was more geared to AL. I must say though, at my first UK press party for Decca Records in London , AL GREEN abruptly took over proceedings and closed out my show …which in my opinion was a no-no…what do you reckon? (Laughing)

Will we be seeing anything new on SYL JOHNSON himself in the near future?

YES! I’m a true old schooler and you should definitely keep an eye out for my new box set on the Numero Group Label. It will includes 80 songs of which 20-25 are – in my opinion – spectacular and never before released. It will also include a 30,000 word booklet telling my whole story – right from the day I was born. The box will contain 7 LPs and 4 CDs and it’s scheduled to be released in the Fall of this year.

Finally – as man who’s done everything in the soul world – what’s your take on the current soul scene? Apart from Mellow-D, of course, are there any artists around who you think are still making real soul music?

First of all, I appreciate the compliment but as yet I haven’t won a Grammy! Real soul singers? Well … my very own daughter SYLEENA JOHNSON has IT! I know that she is contemplating doing some real old school stuff very soon and, of course, there’s SHARON JONES of the DAP KINGS. She sounds really great with that group… real soul.

SYL JOHNSON’S box set ‘Complete Mythology’ is released in the Autumn and tracks from MELLOW-D’S “Rebirth Of Soul” album are already available via CD Baby and other outlets.