SUN RA & ME: saxophonist Knoel Scott tells SJF about his time with the legendary bandleader. 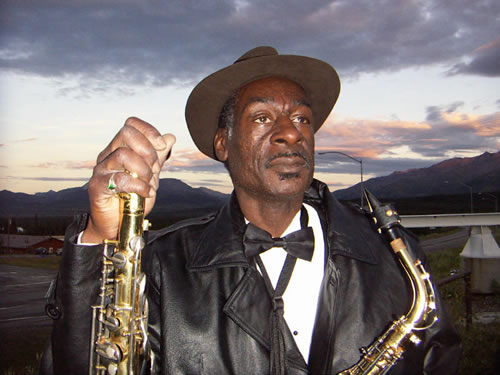 There have been many great bandleaders in the world of jazz – think Fletcher Henderson, Duke Ellington, Count Basie, Stan Kenton, Maynard Ferguson and Quincy Jones to name but a few – but none as unique and indeed, controversial, as pianist/composer/arranger, SUN RA (1914-1993). Born Herman Blount in Birmingham, Alabama, he acquired the nickname Sonny as a child, and when he was in his twenties he reported that he had experienced a cosmic epiphany when he had a vision of being transported to the planet Saturn. That had a profound effect on his life and music and after working as a jobbing pianist in the 1940s and early ’50s he legally changed his name to Le Sony’r Ra and began his own big band, the Arkestra, in Chicago. By the late ’50s he was embodying black self-determinism by running his own independent record company and issuing a myriad of albums, including the recently reissued ‘Jazz In Silhouette’ (now acknowledged as a jazz classic). He was also beginning to wear outlandish, science-fiction style clothes with exotic head Egyptian-like headdresses which underscored his unique beliefs and philosophy about man’s place in the cosmos. As well as this, Sun Ra pioneered the use of electronic instruments in jazz and his legendary Arkestra (which manifested itself in many different incarnations over the years) continued making records through the ’60s, ’70s, ’80s and early ’90s. The group has reconvened several times since Ra’s death in 1993, their most recent concert being at the June 2011 Melbourne Jazz Festival (amazingly, they’ve some concerts pencilled in for the UK in December at a Butlin’s holiday camp in Minehead, Somerset). 55-year-old Baltimore saxophonist, KNOEL SCOTT, played with Sun Ra’s Arkestra in the late ’70s and early ’80s and tells SJF’s John Wisniewski about his experiences with jazz’s favourite space cadet….

I was introduced to jazz by my parents who listened and partied to Count Basie and Ray Charles. I sat in at the local jazz club in my neighborhood of Jamaica Queens where the great drummer Walter Perkins, altoist C.I. Williams, a young Don Blackman, Tom Browne, Bernard Wright, Weldon Irvine and Sun Ra’s Luqman Ali would work and jam. Later I attended Jazz Mobile in Harlem taking classes with Frank Foster, Charles Davis, John Stubblefield, Lisle Atkinson and Sharon Freemon and sat in at Harlem’s Small’s Paradise, the Red Rooster, Lickety Split and the like. I left Queens College to study music of the African-American tradition under multi-instrumentalist Makamda Ken McIntyre and percussionist Warren Smith. I was introduced to Fletcher Henderson’s music by Warren and the music of Sun Ra by Ken.

When did you meet Sun Ra? Were you attracted to his style of jazz
composition?

I met Sun Ra at Warren Smith’s Jazz Loft on 21st in NYC in an audition set up through trombonist Craig Harris who was a former student of Ken and a former member of the Arkestra. This was in July1979. Tenor saxophonist Kenneth Williams was also a part of that audition along with trombonist Henry Mitchell but only me and Kenny joined the Ra legion. Sun Ra told us as he sat at the keyboard: “if you want money fame or fortune, you don’t want to work with me. This is the Creator’s band and I work for the Creator. The Creator will pay you but if you want money fame or fortune then this is not the band for you.” When I heard the album ‘Jazz In Silhouette’ I knew this was the best band in the world with music beyond description. I would listen to it over and over for hours totally amazed by the compositions and flawless execution of the musicians. As a baritonist Pat Patrick and Charles Davis became my idols. I first experienced the Arkestra at the Beacon Theatre in 1977-8  and immediately decided  that membership in the Arkestra would be my life’s dream. Sun Ra was the reincarnate of Pharoah in all his wisdom and splendour and to be a part of Sun Ra’s vision was my life’s dream. Sun Ra’s compositions were an extension of Fletcher Henderson’s innovations and I marveled at their complexity. His use of intervals was unique and mindboggling.

What album was Sun recording when you joined up with him? What were the sessions like?

Sun Ra was in a marathon occupation of the Variety Arts recording studio on 42nd Street recording every day four to ten hours a day. This period gave birth to ‘Strange Celestial Road,’ ‘Omniverse,’ ‘On Jupiter,’ ‘God Is More Than Love Can Ever Be,’ ‘Sleeping Beauty,’ ‘UFO’ and about ten more LPs released on Sun Ra’s Infinity or Saturn labels. My first experience with Sun Ra was recorded as Spontaneous Simplicity on the ‘Omniverse’ LP with me playing the baritone sax solo along with Sun Ra, John Gilmore, Marshall Allen, and Mike Ray and Kenny Jackson and Elo and Danny Thompson with June Tyson assigning and her husband
Richard handling the business.

I remember Sunny sitting at the grand piano and starting to play as me and Mike were standing around it and Sunny just nodded to me and mouthed the word play. I was just 22 fresh out of school and was looking for the key, the chord changes, the melody. I looked at Mike in confusion and Mike said ‘play!’ So I played  and of course tried to latch on to Sunny’s left hand as I was playing baritone and every time I did he would change the accompaniment. He would tell us later: “I don’t want your knowledge – I want your spirit.”

Sun Ra’s sessions were a mixture of lecture and prayer meeting in that he created such a spiritual atmosphere. He would speak of the condition of the world, the condition of African-Americans, the dangers of concentrating on a materialist (earthbound) lifestyle,  the
responsibility we as musicians had to constantly give homage to the creator through our music, necessity for us to have discipline, to dedicate ourselves to giving  our spirit and thoughts and desires over to the creator. Sun Ra did not want our virtuosity or our musical knowledge or our
bebop vocabulary: he wanted  us to play music in its purest form straight from and to the Creator. He would speak of so many things and always cross reference his quotations with Biblical passages or explanations of how certain words contained hidden meanings revealed
when they were broken down into their roots and correlated with the usage of those roots in different religious texts and languages. The musicological references were always to Fletcher Henderson in terms of articulation and to symphonies in terms of use of dynamics, and to
Birds and other animals of nature in terms of the communicative quality within tone and Tone/textural nuance. So the sessions were lessons also. If you didn’t articulate a phrase correctly he would use John or Marshall to demonstrate it to you. If you still didn’t get it
he would turn you over to Marshall (John was too hard with less patience). Sun Ra would lecture you on improving the quality of your thought process, your lifestyle and your music, not in a judgemental way, but out of a deep concern that you evolve into an Omni-being, into
a spiritual entity that you may become acceptable to the beings of other worlds as an ambassador from planet earth.  All of this would occur simultaneously with his constant creation of new compositions and arrangements that were essentially tailored parts written for your particular vibrations and spirit, tone and personality.

Who are some of your influences?

Is there a correlation between jazz, dance and painting?

Of course, music, dance and art are gifts to man directly from the Creator given to him to praise the Creator, and to inspire the rest of mankind to do the same. They are tools to use to tune up
the spirit of man in his quest to develop into a higher state of beingness and they are to be used to waken man from his spiritual and mental slumber to an awareness of sprit and love.

In what new directions is jazz going or are we looking to the past for influence?

Jazz is fighting to survive in a world which has moved away from the conditions which gave it birth: i.e. the holiness church, the ballroom dance, the dance party which featured live music for dancing. These elements have been replaced: a move that has resulted in a redefinition of the word jazz to include all this music which does not swing and the lie that improvisation is jazz. Improvisation is improvisation. Jazz is a tradition, a culture, a way of life and attitude towards living life. Jazz is the spiritual music of African-American people, the triumph of mind, body and spirit over the dehumanization and destruction of an African people who instead evolved into a new people creating a new music, music of the African-American tradition. I believe that jazz has to come together with so-called rap to maintain its connection with its origins and to chart a new future for the music, thus making rap a music form in a truer sense.

Do you enjoy playing live – what is the audience response to Sun Ra’s music?

What does the future hold for you?

To take what I have learned from Sun Ra and Makanda and the other masters I have been exposed to and chart my own course on this planet to play the music of the creator as it flows through me, meaning I must continue to compose and record my original music in addition to being in the service of the Ra wherever I can.

To close could you name your favourite jazz albums?

Catch the Sun Ra Arkestra live in the UK in December 2011. Go to http://www.elrarecords.com/tour.html for details.