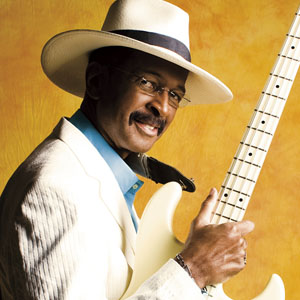 “Woodstock – it doesn’t get any higher than that.” So says a jovial Larry Graham, who lets out a rich, deep, melodious chuckle, as he recalls what he describes as the highlight of his eventful six-year tenure as a member of Sly & The Family Stone. They were, of course, the trailblazing late-’60s/early-’70s San Francisco-based band who were as famous for their racially-integrated line-up as they were for their alchemical and transcendent synthesis of pop, soul, rock and funk. Led by their enigmatic talisman, DJ-turned-band leader, Sly Stone, they stacked up a welter of memorable hits, including ‘Dance To The Music,’ ‘I Want To Take You Higher,’ ‘Everyday People,’ ‘Family Affair’ and ‘Runnin’ Away.’ Larry Graham sang with the group but also, more importantly, provided the group’s rhythmic bedrock with his uniquely percussive bass playing that involved thumping and plucking the strings and which subsequently exerted a profound influence on the role and sound of the bass guitar in funk music.

But while Sly Stone’s career trajectory has taken a markedly downward turn in recent years – last year it was widely reported that he was homeless and living in the back of a camper van on the streets of Los Angeles – Larry Graham is gearing up for a comeback. Not that he’s fallen off the funk radar completely but it’s been well over a decade since his last album, 1998’s ‘Back By Popular Demand.’ Now, though, having recently celebrated his sixty-sixth birthday, the Texas-born Grammy-nominated bassist and singer/songwriter is set to release ‘Raise Up,’ a collection of thirteen new songs recorded with a revived line up of Graham Central Station, the funk-oriented aggregation that he led to US chart glory between the years 1974 and 1980. As well as a brand new album – which is released via Moosicus in Europe and Razor & Tie in the States and features cameos from R&B luminaries Prince and Raphael Saadiq – Graham and his cohorts are due to play in the UK next week at a one-off gig at the London’s Clapham Grand on Monday September 10th. SJF’s Charles Waring recently caught up with the affable funk maestro for an in-depth interview that sheds light on all the key musical junctures in his life and career…

What’s the story behind your new album, ‘Raise Up’?

Though I wasn’t recording over the years I never stopped writing. A lot of artists paint pictures all the time that other people may never see so for me as a songwriter, I’m continually writing all the time and doing some recording. So basically these are a bunch of songs that I felt go together to tell a complete story. It’s like reading a book or going to a concert or a play: it has a great beginning, a great body, and a great ending. So that’s why I chose these particular songs and so far I’m really happy with the outcome.

What does the title ‘Raise Up’ refer to?

Everybody’s going through something – it could be a personal thing, a family thing, or something that is going on in the world that sometimes can get us down – so we really want to raise up above that and we don’t want to let anything just get us down and take us out. So the intent is that when you put on music that it will help you to raise up above whatever it is you’re dealing with; whether for the moment, for the day, or for the week. I’m not saying it would necessarily get rid of your problems but if you raise up to be able to deal with it, whatever it is, hopefully you’ll feel a lot better. That’s the feeling I’d like a person to go away with after they’ve heard the CD. I was trying to create a positive CD, something that makes you feel good. I call it heart music: straight from our hearts to the hearts of the listeners.

Prince – who you’ve worked with many times before – appears on three tracks. What was he like to work with?

It’s really interesting. When we first met I didn’t know that he was raised up on my music. We were doing a show with Graham Central Station, Earth, Wind and Fire, and Teena Marie in Nashville, Tennessee, and we were playing the amphitheatre. On the same night Prince was at the arena there. He heard I was playing in town and contacted me to come over and jam with him at one of his famous after shows. I’d never played with him and didn’t know very much about him. So I went over and jammed with him and surprisingly everywhere I went (musically) he was right there like he’d been playing with me for years. It caught me by surprise because again, at that point I didn’t even know that he had been listening to my music while growing up. At the end of the jam session that night he said “after you’ve finished the tour would you like to join my tour?” I did that and over a period of time we became very close and then I found out that he was raised up on Graham Central Station and also got into Sly & The Family Stone. So that’s why he knew my music so well and so to answer your question, when we play together, it’s like playing with another extension of myself. We just think a lot alike, especially when we’re playing live. So he’s very, very easy to work with and is a very generous person – in the studio he doesn’t let his greatness get in the way or try to overshadow what other people are doing, not only with me but also the way he works with other people too. His sound is definitely distinct and his way of doing things – but he always allows other people to be themselves as well and so that’s the key with me too.

There’s a great cover version of Stevie Wonder’s ‘Higher Ground’ on ‘Raise Up.’ What was the inspiration behind it?

Well, me and Stevie, we go way back. In the early Graham Central Station days we did Stevie covers and I’ve done Stevie songs and he was there when we played a big concert called Human Kindness at Washington DC right in front of the monument. There were tons of people out there and I did a Stevie cover and then later on we went up to Boston. We played a club up there that was broadcast live on the radio and I did ‘Maybe Your Baby.’ Stevie was in the audience and he came up to finish it and sing with us. That was like “oh wow!” And then another time Stevie and Prince and I were in Chicago. We were in this restaurant and there was a club next door where some musicians were playing. And Prince said let’s go over there and get some instruments and jam. So me and Stevie and Prince went over there next door and we had a good old time.

The album features a new line up of Graham Central Station. How does it compare with the original band that you led in the ’70s?

It’s interesting that these band members are closely connected with my previous band members. (Keyboard player) Jimmy McKinney is very, very close to (keyboardist) Herschel Happiness. Jimmy was coming up when Herschel was in Graham Central Station and that’s one of the people that Jimmy studied. He knows Herschel very well. Wilton Rab’s also in the band. He’s actually been with me on and off for the last 37 years, so he’s not a newcomer on the guitar. Some of my new band members went to see the original Graham Central Station play at their high schools because when we were in the Bay Area we did a high school tour. We went to as many high schools as we could get to in the whole Bay Area over a period of time and just did some free concerts to try and encourage young people to enter music.