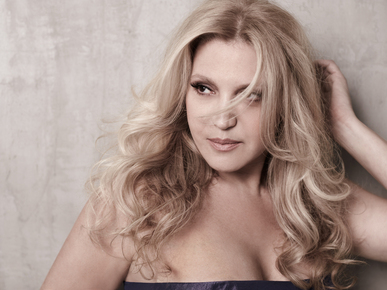 It’s hard to comprehend that almost thirty years have elapsed since Eliane Elias first took to the world stage. A child piano prodigy hooked on playing jazz from an early age, she ventured from her native São Paulo in Brazil to the USA in 1983 at the age of 22 and immediately made a striking impression in the jazz world with her dextrous and passionate piano playing in the group, Steps Ahead, alongside luminaries Michael Brecker, Peter Erskine. Mike Manieri and Eddie Gomez. Inevitably, given her prodigious talent, a solo career followed soon afterwards. Initially Eliane’s albums were mainly instrumental affairs and focused on her considerable keyboard skills in a musical context that married straight ahead bebop jazz with her Brazilian heritage. By the end of the 1990s, though, her delicate and haunting vocals were beginning to feature more strongly. After a long and fertile spell with the legendary jazz label, Blue Note, that began in the late-’80s, Eliane inked a deal with BMG’s Bluebird imprint in 2002 and widened her artistic scope with the albums ‘Kissed By Nature,’ and ‘Dreamer,’ which spotlighted her sultry vocals as well as her jazz piano chops. Keen to broaden her stylistic palette and expand her audience, 2006’s pop-inflected ‘Around The City’ was even more of a musical departure for Eliane and moved her closer to the mainstream with its club-oriented dance grooves and jazzed-up cover of Bob Marley’s ‘Jammin’.’ Eliane returned to Blue Note in 2008 for the critically-acclaimed ‘Bossa Nova Stories,’ a lush homage to the classic songs of her homeland, and the 2009 Bill Evans’ tribute album, ‘Something For You.’

Today, in 2011, Eliane is as busy as ever in regard to touring, recording and writing music. She’s still seeking new musical challenges and a freshly-inked deal with the Concord label has just yielded a brand new album, ‘Light My Fire,’ which has been hailed by some commentators as her best album yet. Eliane recently stopped off in London on her way back from a gig in Europe and took time out to speak to SJF’s Charles Waring about her new project as well as discussing other aspects of her music and career…

You have a new album out – what’s the story behind it?

I had a vision for this album. I wanted it to be an album that brought some different elements together. I wanted to bring Brazilian music beyond the bossa nova so added other elements, like Afro-Brazilian music, and styles from other regions of Brazil as well. I also wanted it to be romantic – I like tunes that have a romantic quality and also have a cool and sexy vibe as well. So I started putting the material together and it came out really well. This record, I have to say, had a certain mind of its own; it had a great vibe that we could see unfold from the start.

As well as focusing on Brazilian music you cover rock and pop songs too, like The Doors’ ‘Light My Fire.’

‘Light My Fire’ is a song I grew up with – it was such a hit everywhere. But I never envisioned doing that tune as an instrumental. I had it on my list – I keep lists of songs I want to record – but I wanted to do this version, which was a very slow bossa nova, very cool and sensual. But it had to be the right record – and this record was the one that I said ‘this tune would be good to do.’ Same thing with (Stevie Wonder’s) ‘My Cherie Amour.’

Isn’t it nice? It’s a bossa. There’s a French version too (as the album’s bonus track). Those tunes are tunes that I like and I made something different with them.

You certainly did something different with your version of the Dave Brubeck Quartet’s ‘Take Five.’

It’s iconic and also such a cool tune but it’s always done fast. So I figured to do it slow and just do a vocalese instead of the normal lyrics. I have to like the lyrics and feel them and relate to them so I thought I’d do it as a vocalese with a very cool rhythm. Then instead of the traditional song that everybody knows, I created a whole little midsection that is developed with some motifs. (Trumpet player) Randy Brecker was amazing on ‘Take Five’: he played beautifully.

So you didn’t have any fears about updating a jazz tune that some deem sacred?

No, I don’t fear that. It’s quite personal by now; what I’ve done has really got my imprint on it. I always do my own thing and if you listen to the tunes, there are subtle things that I do that change them. And if I didn’t feel the tune, I wouldn’t do it. I have to feel it.

How much preparation in advance of going into the studio did you do?

There was a bit of preparation because I chose the material, chose the musicians that were going to do it and then decided the length more or less of each tune; also the tempos and the keys for my voice. After that I prepared the arrangements to give to the musicians that I envisioned for it. Then we did a rehearsal or two and then went in the studio but there was still room for improvisation in the middle. Every tune has some moments of improvisation and on this record every tune was a first take. We all felt when we finished it that we couldn’t top it.

Well, every album has its own different challenges. When I do an album with an orchestra for example, the orchestra is recorded after my part, so it’s not the same thing as this one. Albums like ‘Bossa Nova Stories’ or ‘Dreamer’ are more produced because they’re orchestrated. An album that I did called ‘Around The City’ had more post-production. So this new one is more about pre-production. It has an organic feel to it. There aren’t lots of overdubs or any fixing of anything. It’s all live and every solo has been preserved just the way it was played.

Working on the album with you are Oscar Castro-Neves, Marc Johnson and Paolo Braga.

There are no words for these musicians for what they do. Paolo Braga and Oscar Castro-Neves together with me would bring the authenticity of our Brazilian music. Paolo Braga is an incredible drummer and Oscar and I have this empathy and we can really play together great; our rhythms are the same and we feel the same. Rhythmically we’re on the same road. As for Marc Johnson, what he has done through the years is quite remarkable because he’s always been an incredible bassist. He played with Bill Evans and through the years that he has worked with me he has developed the Brazilian musical language to a place where he takes care of all that business of the rhythm and the groove, and yet he does something that the other bass players in Brazil don’t do which is to bring musical interplay into it while maintaining the groove. There’s nobody else that does this. It’s musical dialogue.

You have the great Gilberto Gil guesting on the album as well – what was he like to work with?

I have worked with him before. I have known Gilberto Gil for years but we haven’t recorded together before – but we’ve done concerts together. He was wonderful. He’s got such a groove and his voice is so beautiful; it is so personal and has a beautiful sound. It was so fascinating for all of us to hear how my voice with his worked so well because it’s quite different. They’re very different but they worked really well together, they blended nicely. The duets were fun.