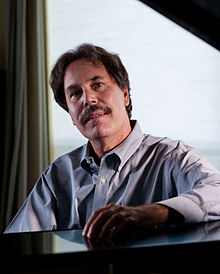 Award-winning US jazz historian, critic and renowned author, TED GIOIA, has written a number of well-received and critically-lauded books on music, including West Coast Jazz, Delta Blues, A History Of Jazz and The Birth (And Death) Of The Cool. His latest tome is The Jazz Standards: A Guide To The Repertoire, published by Oxford University Press USA.

Please tell us about how you began research for your book Jazz Standards, Ted…

Strange to say, I can claim that I’ve been researching this book for most of my life. In addition to my career as a writer, I play piano, and I learned many of the songs I write about in my book back when I was a teenager.  When I sat down to write a book about the most important jazz songs, I found that I already knew most of what I wanted to say about them.  I had played and studied this music, and I had paid close attention to how others played it. Making a book was mostly a process putting down on paper all the things I had learned over the years.

Could you name a few favourite jazz standards?

I have great admiration for the songs of George Gershwin, Cole Porter, Richard Rodgers and the other composers whose works were adopted by jazz artists during the middle decades of the 20th century.  Rodgers may have written the best melodies of them all, and composed a number of my favourite songs — for example, ‘It Might as Well Be Spring,’ ‘My Romance,’ ‘Oh What a Beautiful Morning’ and ‘Spring is Here.’ I also like to perform the songs of Jimmy Van Heusen, who was Sinatra’s favourite songwriter.  Works of his such as ‘Here’s That Rainy Day’ and ‘It Could Happen to You’ have stood the test of time.  I also am a fan of Brazilian songwriter Antonio Carlos Jobim, who ranks among the finest composers of popular music of the last hundred years. However, if I had to pick one favourite song from the jazz repertoire, it would probably be Billy Strayhorn’s ‘Lush Life.’ Strayhorn was Duke Ellington’s long-time collaborator, but deserves to be better known for his own work. Every aspect of this song – words, melody, chords – earns my envy and praise.

You must have a huge jazz record collection, Ted. Do you play your records often?

I just don’t have the space at home to contain all the music I want to access.  So I have shifted to digital music. More than half of the music I listen to nowadays is via digital download. But I do believe that vinyl albums have better sound. If it weren’t for the superior convenience of digital, I would go back to analogue. I spend around 2-3 hours every day listening to music.  During a typical week, I will listen to between 15 and 20 new releases.  Even though I am best known as a jazz writer, I listen to all kinds of music.  Jazz, blues, R&B, world music, classical, pop — pretty much everything and anything.  People who want to know what kinds of current music I prefer can check out the best of year lists on my website.

(Thelonious Monk’s) ‘Round Midnight’ is a jazz classic – maybe you could share the history of this standard?

I suspect that Thelonious Monk originally had some hopes that this song could be a crossover hit.  He usually didn’t pay much attention to adding words to his compositions, but in this instance he had a neighbor write lyrics. The resulting song was originally copyrighted under the name “I Need You So” back in 1943.  But a few years later, Coleman Hawkins recorded a very different version of the song, a solo improvisation based on the chord changes to “‘Round Midnight.” Yet the person who gets the most credit, in my opinion, for turning this piece into a jazz standard is Miles Davis, whose recording of “‘Round Midnight” from 1956 was studied and imitated by many other musicians.

Are you a listener of avant-garde jazz?

I’m not thrilled with the term avant-garde jazz – especially when it is used to refer to music that is more than a half-century old. But I do listen to free jazz, experimental jazz and other styles that are frequently labeled as avant garde. You can’t really understand the evolution of jazz without paying close attention to the ways artists tried to incorporate new techniques and attitudes into their music. But if you look very closely at the music, you can see that this was always part of the jazz idiom.  In the context of their time and place, Louis Armstrong was an avant-garde musician, as was Duke Ellington and Charlie Parker and Miles Davis.

Could you tell us about the story behind the classic (Miles Davis tune) ‘Blue in Green’?

This composition, featured on the album ‘Kind of Blue,’ is usually attributed to Miles Davis. But pianist Bill Evans claimed that he wrote most of it, relying on Davis’s suggestion that he build a piece around a G minor chord and an A augmented chord.  The piece has a ruminative flavour and a free-floating quality that was perfectly matched to the mood of ‘Kind of Blue.’  Davis, however, never recorded it again. Evans kept it in his repertoire, and it gradually got adopted as a jazz standard.

Are there any movements in jazz that you liked, and any that you did not like?

When I see an artist chasing trends or jumping on bandwagons, I start to lose interest. All artistic choices really boil down to two alternatives:  do you follow your heart, or do you follow the crowd. I am more interested in musicians who are driven by their own strongly held values and priorities. That’s what differentiates art from mere entertainment.  Entertainers give the audience what it wants, but artists force the audience to come to where they are. Some of the most exciting artist experiences take place when the artist forces the audience outside of their comfort zone.

Were there any jazz standards that were not able to be included in the book?

I always told my piano students that there were between 200 and 300 jazz standards that they needed to learn.  When I finally wrote the book on jazz standards, I included 252 songs.  But I could easily add another fifty or so works to the book.  However  the book was already 500 pages long, and if I had made it much longer it would have been difficult to keep the price affordable.   But maybe at some point I will write a revised edition with more songs.

Could you tell us about your next project, Ted?

My next book is a history of the love song.  This is a big subject — especially when you consider that most songs for the last thousand years have been about love.  Yet no one has ever written a complete history of the love song.  How strange is that?  This is the most popular type of song in history, yet not a single survey of the subject exists. But my book will fill the gap, and will probably stir up a lot of controversy too.  I’ve uncovered hidden African and Middle Eastern roots of the modern love song that may surprise readers, and many scholars too.

The Jazz Standards: A Guide To The Repertoire is published by Oxford University Press USA