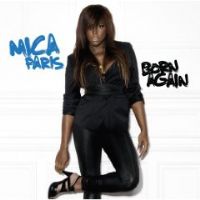 After almost 4 years, the UK’s favourite soul princess MICA PARIS is back with a new album – intriguingly titled ‘Born Again’. www.soulandjazzandfunk.com tracked the ever-lovely MICA down to find more about the long player but before we delved into the set we wanted to know why it had taken her so long to get back into the studio…

The simple fact is that I couldn’t get a deal … no one wanted to sign me. Even my previous album, ‘Soul Classics’ was only recorded because of my radio show. Yes, the truth is I just couldn’t get a deal. So I ended up doing more TV and radio – that’s where I was getting the love from. With the record companies I think it was a cynical thing. It was like they were saying ‘well she’s had her time’ … yes; there was a lot of cynical feelings towards me.

So how did the new album come about then?

I got a call from BRIAN RAWLINGS (the album’s producer and head honcho at Metrophonic) and he said – incredibly – that some hedge fund guys had come along and wanted to put the money up for me to make an album of original material… Incredible but true – so I was allowed to do what I love – go into the studio with a whole blank canvas.

Listening to the album though – and particularity looking at the title – it seems that you’ve filled that canvas with plenty of songs of survival and renaissance… Is this your comeback album?

No! I don’t see myself as making a comeback but I do see myself as a trier. I don’t stop trying. I just keep going. I’m one of those people who, if I was told I wasn’t going to get anywhere – well, I’m still going to kick it. I’m not making a comeback … I’ve never stopped. The songs on the album? Well, they’re a set of songs that are reflective of everything that I’ve gone through. So maybe you could say subconsciously it was like a kind of comeback – but that idea certainly wasn’t premeditated.

Another incredible story – ERIC BENET sent me a message via my My Space page saying that he was a real big fan and had I listened to any of his work. When I told BRIAN we checked out ‘You’re The Only One’ and it was incredible. So we went in and did it my way and when those soul chords came in – well it was like a marriage. I originally wanted it to be a duet with ERIC, but after one take it sounded just so, so good. The KEYSHIA COLE song was down to BRIAN but after we recorded ‘I Remember’ the rest of the album just fell into place – before that it wasn’t quite happening.

There are lot of other flavours on the album too – notably, on the opener ‘Baby Come Back Now’ there’s a definite feel of that contemporary UK sound associated with DUFFY and AMY WINEHOUSE – again, was that a conscious thing?

No – not at all – for starters it wasn’t written by me. It’s a JAMES MORRISON song, of course… he wrote it for me and when I heard it, it so reminded me of back in the day… of Motown… of ‘Nutbush City Limits’. It just had that vibe and no one has heard me sing like that before. It’s a fresh MICA PARIS. No, I wasn’t trying to be like DUFFY or AMY. I’ve been around longer than them. You know, when I started people compared me to DIONNE WARWICK – but now I’m being compared to all those girls! But don’t get me wrong – I love AMY, DUFFY, ADELE … in fact I’ve know AMY a long, long time. She’s an amazing vocalist – one of the best this country’s ever seen.

… and what about the future for MICA PARIS?

Well for the immediate future I’m going to promote the hell out of this album… I’m doing everything – even selling my intestines!!! And for the long term… well, I just want to get myself into a place where I can consistently make records so I don’t get to where I was in the past. No, I don’t wanna be back in a place where I can’t make records just ‘cos I’m not being funded. That’s my dream – I’m happiest when I’m singing great songs.