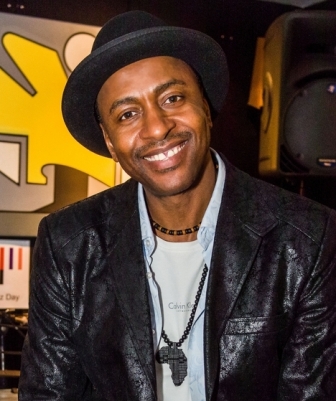 It’s shaping up to be a good year for UK soul singer DAPAUL. However, 2013 didn’t start that auspiciously for the genial Londoner. He’d just spent four years working on an album but was struggling to create interest. He couldn’t find a label to work with in the way he wanted while the music media showed a distinct lack of interest. DaPaul, though, had huge faith in his music and spent weeks trudging around London and getting savvy, independent record shops to stock his long player ‘Soulful Spirit’. Then, the breakthrough… respected UK soul writer and invetarte record shop rummager, Toby Walker, bought a speculative copy of ‘Soulful Spirit’ and duly reviewed it on his authoritative site, www.soulwalking.co.uk and the album started to take off. Lots more media coverage followed and with regular spins on Jazz FM and other soul stations, the album started to climb the charts. It’s currently nestling in the upper echelons of the UK soul chart and DaPaul couldn’t be happier … ’bout time then that we found out more. So here’s the low down on the UK’s best-kept soul secret …..

My name is David Philips, I was born in London. I grew up in South London, the last of 5 siblings where music was always around me. My introduction to music was through my mother who took me to church and also started my piano lessons at age 6. Learning to read music was interesting and also competitive at my church so I took my piano grades and eventually was able to read the music from the hymn book at church and was put on to the church pianist rota. I enjoyed playing hymns, but the music that really caught my ear and engaged me was the folk songs from our Caribbean culture. These songs like ‘I’m gonna lay down my burdens’ or ‘Jesus on the mainline’, ‘Glory Glory Hallelujah’ were all handed down aurally to each generation and the musicians who played them at church played by ear and improvised. I found this intriguing and also started to play piano by ear.

Tell us now how you got involved in secular music…. did anyone influence you specifically?

Music was and still is an integral part of youth culture. When I was a teen I was influenced by gospel, soul & R&B, Jazz music from the US and also British soul & pop music. Songs that come to mind are; ‘People Get Ready’ – Curtis Mayfield and the Impressions , ‘Lean On Me’ – Bill Withers, ‘Oh Happy Day’ – Edwin Hawkins, ‘Today’ – Richard Smallwood Singers… and so many more. My musical development had 2 main strands; – there was my life as a gospel musician at church learning to play folk songs by ear, sight-reading hymns, singing in choirs and vocal groups and then my life as a youth going to youth clubs and music community projects like Lewisham Music Academy in Deptford and The Basement Music Project in Covent Garden (near to Pineapple Studios). The musical atmosphere then was like a Fame School because there were many opportunities to join groups, bands and to perform.

How did you get into professional music then ?

Many of the people I met at those times were the same people I connected with later in my quest to be a professional. I reconnected with Ronnie Wilson and met Dennis Charles in 1994. These 2 producers were producing ‘Eternal’ and hired me as a session musician, these was a fruitful collaboration as I went on to record for Eternal, Cleopatra, Louise & Alexander O’Neal and various other artists they recorded.

When did you decide to make a solo album…. your first, I guess?

I have always composed and written songs so I think the concept started to develop around 2009. I was compiling songs and just looking at music productions and arrangements I had done and thought it was time to leave my personal mark as a songwriter.

How did you go about it? How do you write your songs?

Songs come in different ways to me. For example ‘She’s So Entertaining’ came to me in a dream and I woke up and went straight to the piano and it was instantaneous, whereas ‘Red Blood Streets’ was based on a keyboard riff. Lyrically, my inspiration comes from the emotion of gospel, the truth and vulnerability of Motown, Stax and classic soul music that came from life experiences. I don’t necessarily believe you should wear your heart on your sleeve with every song you write but I do feel that being truthful lyrically even if it is about your personal pain will reach your audience. My songs are about my feelings, experiences and views about the world we live in and I really enjoy song writing, it is my life’s work

I believe it’s taken something like four years to get the album out… why so long?

Writing, composing, producing and financing an album is quite an undertaking as I came to find out. I have always performed live so I wanted my album to feature live performances recorded professionally. This was an ongoing project which had its ups and downs (getting the right musician for each song and various creative choices, differences of opinions etc.) but retrospectively I feel that when it was getting hard was when it was getting good. Perseverance, perfectionism and faith were the keys to the completion and release of the album, I believe good things take time.

When did you adopt the professional name DaPaul and why?

The name DaPaul is from my father’s French Guyanese roots, it is an African name which means ‘beloved place of rest’.

I’m guessing you couldn’t get a deal with a label… did you try.. and how else did you go about getting the album out there?

During the progress of the album I did make connections with various labels and previous contacts I had in the industry but decided that I wanted complete creative control and independence. Independence as a solo artist comes at a price which is; marketing, promotion and sales are your responsibility as well as being the artist. I now have a manager who works on my behalf with getting deals, gigs and organising things generally.

Now the album… why did you choose ‘Soulful Spirit’ as the title track?

The title track was inspired by my mother . Truly she is the inspiration behind the album title and title track ‘Soulful Spirit’. My definition of a ‘Soulful Spirit’ is a person who has experienced in life’s joys and pains and has navigated their way through, holding on to good values like family and faith.However, it always amazes me how songs mean different things to each person even though the original inspiration may be quite specific it can take on multiple means according to interpretation. When I meet different people they tell me how my song has affected them and I am continually surprised by its meaning to them.

Tell us now about the track ‘Kumbaya’ – everyone’s intrigued by that –thinking it might be the old folk song. There’s also a Stevie Wonder style harmonica going on… are you a big fan?

‘Kumbaya’ or ‘Come By Here’ is a folk song from Africa/America which the southern slaves used to sing and has been handed down over generations. This song stays in my memory from a performance I remember by the Escoffery Sisters with pianist Paul Gladstone-Reid. I always had that song in mind as a tribute to my gospel roots but wanted to develop a contemporary version and it came about in one writing session ….. very inspiring. Yes I am a fan of Stevie and definitely wanted that sound on the record, as Stevie wasn’t available when I called him (LoL!!) I just decided to ask Clive Mellor to play.

The track that’s getting all the attention seems to be ‘She So Entertaining’ – what’s that about… what were you trying to create with this song?

I am so grateful this song has been so well received, this came to me as I said in a dream. I wanted to celebrate my love towards my wife and whilst writing, this lyric came to me ‘She’s So Entertaining’ ….. as I started to explore lyrically different avenues I also wanted to also express my admiration for great entertainers from past and present so that where the comparison comes in the middle 8 … “You’re like Greta Garbo, Ava Gardner, Liz Taylor, Sophia Loren, Dorothy Dandridge you’re so Entertaining, like Gene Kelly, Nat King Cole, Fred Astaire, Michael Jackson, Ray Charles & Stevie Wonder I just love being with you”. With ‘She’s So Entertaining’ I am making a tribute to my wife whilst also making a tribute to entertainers I am inspired by.

What are your hopes and aspirations for the album?

To reach as many people as possible and to inspire my listeners to a place of peace and love.

Where does DaPaul see himself in five years time?

No one knows the future but I expect to be continuing on my quest in writing songs, performing and navigating my way through the ever-changing and evolving music industry ……… it’s great fun!!

Finally how we can find out more?

DAPAUL’S album ‘SOULFUL SPIRIT’ is out now and there’s a full review in our reviews archive.