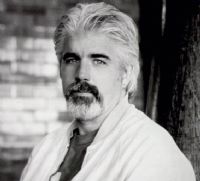 As previously reported in www.soulandjazzandfunk.com, the ever-amiable MICHAEL McDONALD has brand new album on the horizon. With the title ‘Soulspeak’, it’s the ex- DOOBIE BROTHERS front man’s follow up to his two CDs of Motown covers and those who like cover versions will be delighted to know that on the new set there’s covers-a-plenty again. www.soulandjazzandfunk.com recently linked up with the jet-lagged MICHAEL who explained to us why he’s gone down the covers path again…
I had some trepidation about doing more Motown covers but I knew that that was what Universal wanted. Anyway, this time I decided to compromise and open the door a little to a wider range of covers, and, of course, we added some originals to give it all a different aspect. There is a wide range on the album – I mean by Bob Marley’s ‘Redemption Song’ , Stevie Wonder’s ‘Living For The City’ and Van Morrison’s ‘Into The Mystic’ – why did you choose those particular songs?Well, we were looking for some kind of theme without really naming it and the songs we picked – maybe subliminally – all had some kind of deeper meaning. Like Bob Marley’s Redemption Song’ – that one talks about us seeking our salvation in someone or something, and how we could even spend our whole life just doing that. That’s what sets us apart from other animals. These are all songs that speak to us… and that’s the common thread. The three new songs, too, have a degree of spirituality, I think.
Were you daunted or overawed in tackling songs associated with iconic singers like Ray Charles and Van Morrison?
Yes – I always do but part of the point of doing something like this is throwing yourself against the wall and taking on the challenge of trying to do something a little different with things that are so familiar. Maybe the least known song on the set is Tyrone Davis’s ‘Baby Can I Change My Mind’ – why did you choose that one?
I always loved that song and we’ve often played it live. It has the quality of a familiar handshake and I love Tyrone Davis too – he’s a big favourite.Who else then would you call a favourite or even an influence?
I have many… Ray Charles of course was a big influence on my style along with Marvin Gaye. But I guess I’m not the only person who’s ever said that.But what exactly is ‘your style’… would you describe your music as ‘blue-eyed soul’?It’s hard to say. I think it’s a form of soul music – that’s the music I grew up with. Yet, I’ve played rock and roll over the years with many bands. But I wouldn’t like to pigeon-hole myself into any category. And what about the future record-wise. Are you planning another covers album?I’m sure the next album for me won’t be a covers album. I think I’ve pushed that envelope to the limit. I think it’s time I made a concerted effort with some new stuff. I’d love to get together again with people like Tommy Simms and do some fresh writing.

MICHAEL McDONALD’S ‘SOULSPEAK’ is out now on Universal. Find a full review on our ‘REVIEWS’ pages. MICHAEL will be touring the UK in June