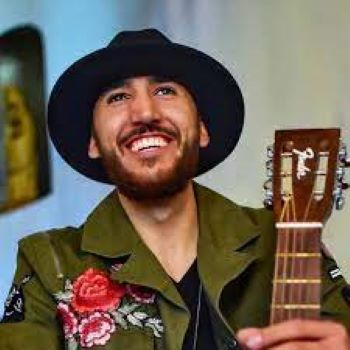 US singer/songwriter ISAAC ARAGON is currently winning plaudits with  his latest single, ‘Brown’. Like his previous, charting singles like ‘Who’s Standing With Me’, ‘Brown proffers a gentle sound, but the song packs a punch! Like much of his work Isaac likes to deliver messages in his music; so, intrigued, we hooked up with the Albuquerque-based singer to finds out more about ‘Brown’….

‘Brown’ is one of the tunes I’m most excited about on the upcoming record. I wanted to dive deeper into a “funkier” sound, and explore mixing in some Latin rhythms, melodies, and even lyrics, into my project. This was all done with the intention of exploring, and ultimately mixing, different sounds/cultures/worlds into one musical space. Thematically, it’s a song that’s meant to encourage and empower people that may feel ugly or powerless based upon the color of their skin or where they come from.  I think that indigenous folks, and so called “people of color”, around the world, have long been taught to feel lesser of themselves, and who/where they come from. I wanted to create a work of art that communicates to those folks, 1. You’re not alone, 2. There is community, and therefore love and empathy, in the shared history of pain and oppression that you may feel or have experienced, 3. You are beautiful, and your culture is worth celebrating (music, art, dance, food/cuisine, etc.), and 4. There is immense power to be unlocked in understanding your identity, and creating a life built from knowing who you are and where you come from.

The song is accompanied by a powerful video…. Tell us about that. Is this the first time you’ve recorded a film to accompany a release?

Yes! I’m thrilled with how the film turned out. I worked with a talented filmmaker from back home in Albuquerque, by the name of Isaac J.E Garcia. We began working on the film around 1 year ago and kicked around some ideas and executed at what I believe is a very high level. It’s such a delicate process, because the visual HAS to complement the music in the proper way…a bad video can ruin a song. Luckily, with Isaac’s direction, I believe this video only elevates the music, and clarifies some of the lyrical and musical ideas and concepts that I’m trying to communicate. Being able to visually represent various cultural groups and practices across communities, was something that I’m very proud of. I’ve done one other music video before, for ‘We the People’. It’s also a very powerful film, and if you haven’t seen it, I highly suggest you do so! The difference with the ‘Brown’ project, however, is that the song and video were released on the same day, so people have primarily been consuming the two together as ONE work. It’s been a great response so far! I’ve had people calling me, moved to tears, expressing how deeply the project spoke to them and encouraged them in their own journey. Those emotional connections are the only meaningful metrics and currency to me when it comes to my art. THAT’s why I do what I do, to try to touch hearts and lives, and hopefully enrich them in some way.

And the players on the track… are they your band The Healing? Tell us about them.

Correct. They’re a collection of not only world-class musicians, but musical ARTISTS, and I don’t say that lightly. They each brought their artistry to this track, and to the rest of the record, for that matter. Artha Meadors (bass) is my right hand man, musical director, and had a huge hand in production from the very beginning of this project. He’s a truly brilliant artist and can do just about anything with a bass in his hand. Then there’s Paul Palmer III on drums and background vocals; Paul is a monster drummer and singer and is very intentional in how he approaches each individual tune. Dee Brown holds down the organ and background vocals. Dee is a phenomenally talented singer/songwriter in his own right, who fronts his own project as well; I believe you all got a taste of his work with his track ‘Good Time’ released a few years back. Having Dee’s chops and voice on my own project is an immense blessing. Then lastly there’s Kevin Cummings on electric guitar; Kevin is a genius of guitar, and just sets fire to any piece of music that he touches.

The single is available in two versions – one with then other without a rap/monologue. Why did you decide to offer two takes. Don’t you think the one without the monologue dilutes the message? And who is the rapper who delivers so powerfully?

I offered a version without the spoken work outro simply for radio programming purposes. In the case that a DJ may find it more suitable to mix an instrumental outro into their show. But I highly encourage using the version with the spoken word! The piece features Albuquerque’s inaugural Poet Laureate, Hakim Bellamy, who is a highly celebrated, award winning poet. His social commentary is absolutely riveting, and if you unpack his piece line by line, you’ll find an IMMENSE amount of wisdom and insight about Black and Brown folks across the world. Hakim truly blessed this track, and I believe he did an outstanding job in elaborating upon and bringing clarity to the message song.

How is ‘Brown’ doing?

The track is doing incredibly well for a completely independent, grassroots release. Without major label support, it’s obviously hard to do groundbreaking numbers…but as I alluded to earlier, the most important metric for me is the depth of the connection from the folks that do get their eyes and ears on the project. And that’s been nothing but positive and deeply impactful thus far. I haven’t made a dollar yet, but the outpouring of love and support have been overwhelming! That’s my revenue.

‘Brown’ is another, for want of a better term, a socio/political message song. Most of your singles to date have carried similar messages – do you see yourself as a preacher, an activist even and do you think songs like yours have any kind of impact. I mean John Lennon released ‘Imagine’ in 1971 and Bob Dylan was delivering his messages even earlier and things don’t seem to have changed too much!

I’m a student of Marvin Gaye, Bill Withers, Stevie Wonder…for me, music is as powerful a vehicle as any to inspire consciousness, love, empathy, and understanding. That’s something I think the world could always use more of, so I keep writing these tunes. And no, I definitely don’t see myself as a preacher, because I don’t feel like I necessarily have any of the answers! I simply want to start a conversation, and that begins with me expressing what’s on my heart and my mind. I have a heart for people and want to see as many people as possible living lives of peace and dignity…in that regard, I do consider myself an activist. I’ve committed my life to fighting injustice anywhere it may arise and standing FOR all that is good and just in this world. I don’t have a law degree or a church pulpit…I’ve just got a guitar and a pen & pad, so I use them to the best of my ability to touch minds and hearts in need.

Will we ever hear Isaac Aragon releasing for what we might call a more traditional song – dealing with, say, romance or something else light?

Funny you should ask! The next song slated for release is a tune called ‘Tip of My Tongue’. It’s a song about when you’re starting to have romantic feelings for someone, but you’re not quite sure you’re ready to verbally express those feelings just yet…but you can sure feel them coming to the surface. I know, very unlike me to write about something light! It’s a natural shift though, because it’s a completely true story I experienced. myself, with the woman who is now my wife! It’s a poppy, soulful track, and I believe it will be the most commercially successful on the album. I can’t wait for you guys to hear it!

We read that you’ve been busy gigging through the summer. For us over here in Europe who can ‘t make the shows, what would a typical Isaac Aragon concert consist of? Do you sing any covers?

That’s right, we’ve been having a blast! We played a show at home in Albuquerque to a sold out crowd of over 4,000 patrons. The show is a high energy showcase of world-class musicianship, all elevating the songs and the message. We do a cover here and there, mostly from my heroes Bill Withers and Marvin Gaye, but the set is primarily original. It’s my life’s goal to hop the pond and play my music across Europe. Hopefully we’ll make it happen soon!

How do you find time to fit everything in – I believe that you’ve just been blessed with a baby boy (Congrats, by the way) – that must take up plenty of your time….

Thank you! I’m a blessed man. I’ve got 2 happy and healthy children now. I’ve got a steady day job as a physiotherapist, I do shows 3-4 nights per week, and am independently producing and promoting this music. But it’s a labor of love; it’s my life’s purpose! And for that I’ll always find time!

So, what next for Isaac Aragon?

I’m rolling out more singles over the coming months, with the full length release in 2023 (available on vinyl). Touring the new music throughout the year and getting ready to hit the studio for the next one! With a bit of good fortune, I’ll be in your living room doing an in-person interview as we tour Europe in 2023/2024!

And how can we learn more?

Social media is a good way to stay up to date with releases and shows. My website is also good for staying in touch. Instagram: @isaacaragonmusic Website: https://www.isaacaragon.com  Email: isaacaragonmusic@gmail.com

ISAAC ARAGON’S ‘Brown’ is out now