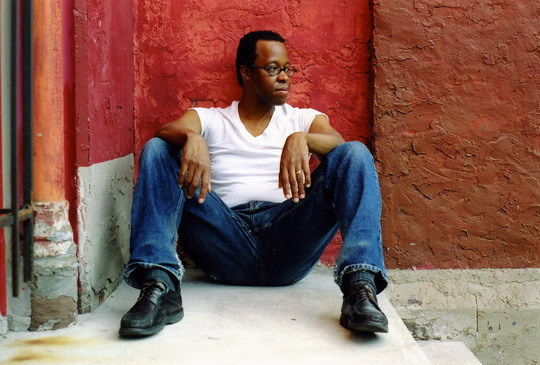 MATTHEW SHIPP is one of the leading lights of the contemporary Free Jazz movement, having spent many years as a valuable sideman with avant-garde saxophone maven, David S. Ware. In recent years, the Delaware-born piano player – who is now 52 – has established himself as a solo artist of note and has also expanded his musical horizons by embracing elements of hip-hop and electronica. His 2011 double CD set, ‘Art Of The Improviser,’ is arguably Shipp’s most potent opus to date and more recently, he collaborated with US avant-garde filmmaker, Barbara Januszkiewicz, on the soundtrack to a movie called ‘The Composer.’ SJF’s John Wisniewski recently caught up with the celebrated pianist to discuss his life and work…

When did you begin playing piano and jazz music?

I began playing piano at 5 years old. I was inspired by the church organist at my parents’ church – they are Episcopalian – I studied with the church organist and it was the usual classical piano lessons. I got interested in jazz at 12 having heard both Ahmad Jamal and Nina Simone on TV. I started the process on my own of learning to play jazz.

Whom did you study under, in your early years?

I had a couple local classical teachers early on – the two main jazz teachers I had were Robert Boysie Lowery who had been Clifford Brown’s teacher, and Denis Sandole,  who was John Coltrane’s teacher. I also studied briefly with Ran Blake but mainly I am a product of my own imagination.

Do you find that you can express yourself through hip-hop and electronica as well as you can through jazz – are the older listeners sometimes only looking for the free jazz?

When I did do the electronica projects it was a viable means of expression. I looked at it as if a composer decides to use a cello in a piece that is his/her means of orchestration — well, the electronic aspects of those projects, where my orchestration for those specific projects  – and yes, there are those people that only relate to the perceived purity of an acoustic free jazz situation but by and large most people are open minded or at least understand that an artist needs to be free to explore different things even if it is not the listeners’ cup of tea.

Who is your favorite jazz pianist?

In the jazz idiom I most relate to the strength and purity of conception of Bud Powell – and a close second for me is (Thelonious) Monk.

Your newest work ‘Piano Sutras’ has been released recently. Tell us about recording the album. Was the selection process for the album difficult and is there any theme that runs through the work?

‘Piano Sutras’ is a prayer to the piano, hence the term ‘sutras.’ I am trying to find a dimension on the instrument where the instrument is a simulation of itself by itself – in other words the instrument plays itself. So the theme that runs through the CD is the spiritual aspect of the pure act of playing the piano – the selection process was not difficult for I composed all the music except two pieces: a cover of ‘Giant Steps’ by Coltrane and ‘Nefertiti’ by Wayne Shorter. But other than those two pieces the rest of the material is my own and the pieces fit into a puzzle that explores various aspects of yin and yang – darkness and light – and a whole spectrum of pianistic vibrations.

You have been a member of David S. Ware’s Quartet. Could you tell us about working with David?

I joined the David S Ware quartet in 1989 and was a member for 16 years. It was a tremendous experience and gave me the chance to flex my muscles as an orchestrator in the rhythm section of a modern tenor player who had a big sound and a spirituality not unlike Coltrane but whose music was of this time and his vision of what modern jazz is now that we speak. David gave me a lot of freedom in band – though he had specific ways of going about some of the material and the way I voice chords and my sense of pulse seemed to work hand-in-hand with his lines, motifs and compositions. David was an iconoclast and an original and despite the fact that we did get a lot of notice as a quartet I don’t think his music has really been absorbed yet. He has left a massive body of work. I would start with the album ‘Flight Of I’ if I was checking out Ware for the first time.

Could you tell us about the recording of the 2-CD set ‘Art Of The Improviser’? Was there a theme running through this work as well?

As far as ‘Art Of The Improviser’ goes that was the USA debut of my at the time new trio, with Michael Bisio on bass and Whit Dickey on drums. We got a live tape we liked and decided to go ahead with a live CD. Ditto with side 2 that was a live solo concert. The way the solo was captured caught an airier maybe slightly more classical type sound whereas the way the trio was recorded captured a crunchy dark jazz sound. I thought they showed contrasting sides to my personality and were good complements.

Please tell us about your collaboration with Barbara Januszkiewicz?

Barb has done a brilliant film called ‘The Composer.’ It is a film about a piano and follows the evolution of the piano from the wood in trees to it is an instrument that must be brought to life through the brain waves of a composer/performer. In the film I am the conduit to bring the instrument alive.

Look out for Matthew Shipp’s latest album, ‘Piano Sutras,’ on Thirsty Ear Records, which is released in September 2013.