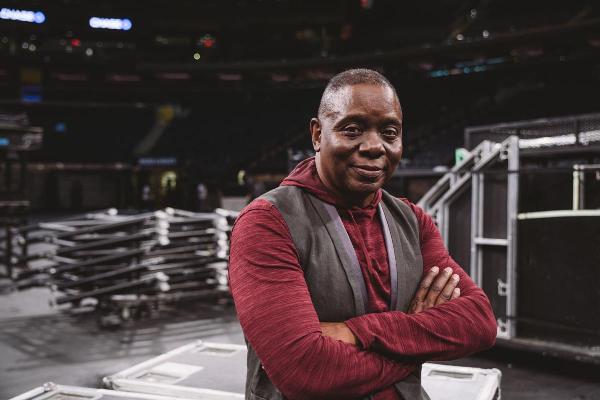 Sonically unique, Philip Bailey‘s celestial falsetto voice, with its unmistakable haunting quality has been a key component of Earth, Wind & Fire’s sound for  47 years now. For a long time, it was the yin to the yang of the late Maurice White’s smooth baritone and helped define some of the R&B supergroup’s biggest hits, including ‘Fantasy,’ ‘Reasons’ and ‘After The Love Has Gone.’ From time to time, though, Bailey has expressed himself as a solo artist away from the group. He first recorded on his own in 1983, when he released his debut LP ‘Continuation,’  and up until 2002, when he released his ninth solo LP, ‘Soul On Jazz,’ he was recording solo albums on a fairly regular basis. Since that album, though, he’s been silent for 17 years. Now, though, the Colorado-born singer and percussionist returns with a brand new solo offering called ‘Love Will Find A Way,‘ which was initially a self-funded project but is now being released by Verve Records on June 21st.

“It was actually sparked by my working with my ‘night gig’ a few years ago,” reveals Bailey, whose natural talking voice is surprisingly much deeper than his high-pitched singing tone. “I call Earth, Wind & Fire my day gig,” he laughs, then adding:  “I was doing stuff with (jazz keyboardist) Ramsey Lewis, and later on I decided I wanted to do some recording of that kind of music. So my daughter and my son plus my art director came up with a concept to work with using people who I had already established relationships with, such as (pianist) Chick Corea and (bassist) Christian McBride.”

Bailey says the project began by cutting a song called ‘You’re Everything,’ which was originally a Latin jazz track recorded by Chick Corea with his band, Return To Forever, in 1972, featuring Flora Purim on vocals. “I’m a big fan of hers,” declares Bailey. “We did that song with Chick and (drummer) Steve Gadd in Chick’s studio in Clearwater, Florida, and it was one of the songs at the beginning of the project.”

But the album’s stylistic trajectory changed after Bailey got in contact with influential keyboardist, Robert Glasper (pictured above with Bailey), whose cutting-edge music he much admired. “He was very excited about working with me,” says Bailey of Glasper, who ended up producing four tracks on ‘Love Will Find A Way.’

Glasper was responsible the Afrobeat arrangement on the album’s mesmerising opener and first single, a cover of Curtis Mayfield’s 1975 song, ‘Billy Jack.’  “Robert sent me that template when we were talking about that song and said check this out. He did it on the keyboard and sent it back to me and we loved the idea, especially with me being a percussionist. It gave me an opportunity to have a bed of something to play on using the kalimba, the djembe, timbales and congas.”

Glasper’s presence had a catalytic effect on the direction of the album or as Bailey puts it: “The other pieces to the puzzle then kind of serendipitously came together one way or the other.” Glasper brought in trumpeter Christian Scott a Tunde Adjuah,  and vocalists Bilal and Casey Benjamin joining the project, who all contributed on different tracks.

Another major player from the contemporary jazz scene who makes a guest appearance on ‘Love Will Find A Way’ is tenor saxophonist, Kamasi Washington, who’s one of the most talked-about figures in the idiom right now. Bailey, intrigued by the hype surrounding Washington, saw one of his live shows in New Orleans and then realised that he knew the saxophonist’s dad, Ricky, who was playing in his son’s band.  “We went to the same church and my children and Kamasi went to Sunday school together,” reveals Bailey, illustrating another serendipitous connection that contributed to the album’s genesis.

Washington contributes to one of the album’s outstanding sounds, ‘Sacred Sounds,’ produced and co-written by Robert Glasper alongside Bailey and his son, Philip Doran Bailey (who at present is also a member of Earth, Wind & Fire). Stylistically, with its blend of spacey jazz and astral backing vocals, it puts one in mind of some of Earth, Wind & Fire’s epic mid-’70s soundscapes like ‘Zanzibar,’ and ‘See The Light.’  “Robert just cooked it up in the studio and then I got back to Los Angeles and listened to it and edited it together,” says Bailey. “I then called Kamasi to do some of those saxophone lines that Robert Glasper was playing on the piano. And then I put some backgrounds on them. My son came up with the line, ‘the sacred sounds of love.'”

Another star turn comes from Black Eyed Peas’ main man and uber-producer, Will. i. Am, who contributes to ‘Stairway To The Stars.’ “The song was originally another song, which I edited and I gave to Will to make the track a lot more bouncy,” discloses Bailey. “He added a couple of things to it, and then we gave it to Christian Scott to play on. I was on the road at the time so we face-timed in the studio.”

Inevitably, our conversation moves to the mighty Earth, Wind & Fire. “Maurice (White) heard me in Denver, Colorado, when my band Friends & Love opened the show for them,” says Bailey, recalling how he joined the group back in 1972. “That’s when we met.”At that time Earth, Wind & Fire were signed to Warner Bros but there were tensions in the group over the band’s musical direction and lack of success which led to White and his younger brother Verdine restructuring the band by firing the other members and recruiting new, younger members in their place. Remembers Bailey: “When they began to reform, I was in Los Angeles as the musical director for a gospel rock group and Maurice and Verdine came over and asked me if I wanted to join the band. Then I called (keyboardist) Larry Dunn and (saxophonist) Andrew Woolfolk who were in my band in Denver, and that’s how Earth, Wind & Fire was put back together.”

One of their initial engagements, recalls Bailey, was playing at the school graduation of a rising young California jazz pianist, then just 18. “One of the first gigs that we had before we got on the road was playing for Patrice Rushen’s prom,” he reveals with a chuckle. Earth, Wind & Fire both sounded and looked different from other R&B bands at that time. They melded psychedelia and a hippie ethos with soul, funk, rock, jazz, and Latin music. “It had an Afro-centric thing too with the kalimba and the garb,” says Bailey. “Maurice always said that he wanted the audience to either love us or hate us because he didn’t want to be in the middle. So we did take a lot of chances. Fortunately, they worked and we went on to carve out our own niche.”

Indeed, the new incarnation of the group was signed by noted A&R executive Clive Davis to Columbia Records later the same year and in the next few years began to make a huge commercial impact with their music. Though Maurice White passed away in 2016, his influence lives on and his presence can still be felt, as Bailey affirms: “Having him as the architect, conceptualiser and lead vocalist on many of the songs and me and him doing all the vocals and lyrics, you can’t play Earth, Wind & Fire songs without Maurice’s presence being in it.”

It was his second solo album, 1985’s ‘Chinese Wall,’ that catapulted Bailey to fame and made him a household name around the world as a solo artist. It spawned ‘Easy Lover,’ his infectious duet with Phil Collins (pictured above) which became a UK no. 1 hit. “The biggest memory I have of that time was that even though Earth, Wind and Fire were highly successful I was introduced to a whole other world,” reflects Bailey on that period. “It took me to a whole new musical plateau. It was selling 500,000 singles a week, and the promotion people were going crazy.”

Bailey says that the standout moment of his solo career goes back to those heady days 34 years ago. “Probably the biggest highlight was my ‘Chinese Wall’ album, and the number one, ‘Easy Lover,'” he says. “And also winning a Grammy for my gospel album, ‘Triumph.'”

He states that the absolute pinnacle of his tenure with Earth, Wind & Fire was performing for US President Barack Obama. “We played in front of him three times,” he says with palpable pride in his voice. “The first gathering was at the White House, in front of governors, and then for a fundraiser and then for a Christmas event. And in years back, we also played for the Clinton Whitehouse. That was a great honour as well.”

Outside of his own career as a musician, Bailey also finds time to run a charitable organisation with his daughter, Trinity, called the Music Is Unity Foundation. “It’s been in existence now for over 10 years,” explains the singer. “We started it to benefit emancipated foster care youth who were coming out of the foster care system with no support. They were challenged with trying to face the world having no one to lean on. There are organisations who work with these young kids on a daily basis and we provide finances for them to help them in their pursuits.”

It’s a laudable endeavour but Bailey also reveals that Earth, Wind & Fire also offer an educational opportunity to aspiring musicians. “We have a programme where we invite about 20 youths who interested in becoming part of the music industry, to come back to our backstage sound check. We introduced them to the many different facets of the touring entourage and invite them to the show and afterwards, they have dinner with us.”

Even on his days off, Philip Bailey can’t escape from music, it seems. “I’m studying jazz piano and I’m having fun doing that,” he reveals, adding: “Oh, and I also play golf.” He says the game relaxes him but is he any good? “I love it. I take golf very seriously …but golf don’t take me seriously.”  Bailey follows this confession with a wry, self-effacing chuckle. He’d better stick to what he’s best at then – singing and making inspirational records.

Philip Bailey’s ‘Love Will Find A Way’ is out on June 21st via Verve Records.