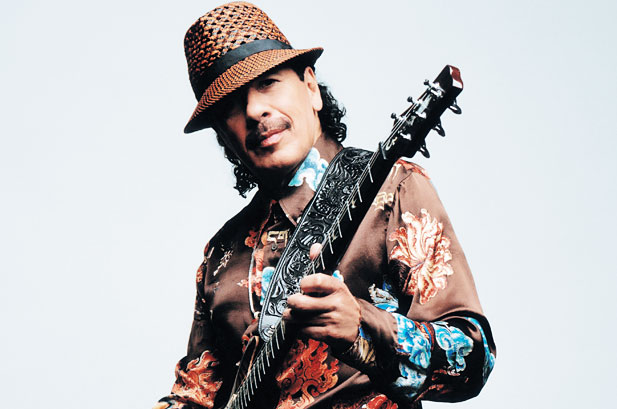 The legendary moustachioed guitar guru, CARLOS SANTANA, has been recording since 1969, the year that his eponymous and then relatively unknown band went down a storm at the iconic Woodstock festival. Woodstock was the explosive catalyst that set Santana’s career in motion exactly 45 years ago. And what a career it’s been – to date, it’s yielded twenty-three albums, sales of one hundred million records, ten Grammy awards (nine of which he scooped for his 1999 comeback album ‘Supernatural’) and an induction into the prestigious Rock and Roll Hall of Fame. At 66 years old, then, and given his impressive achievements, you’d imagine that Carlos Santana would be content to rest on his laurels a while and take things easy. But there’s not much chance of that. A new album, ‘Corazon’ – which, surprisingly is the Mexican-born guitarist’s first ever all-Latin project, and this week debuted in Billboard’s Latin Albums chart at #1 – has just hit the shops in the UK and to top that, the group is scheduled to appear at the closing ceremony of June’s FIFA World Cup in Rio de Janeiro.

Yes, I’m so grateful. He is the Einstein and the (Stephen) Hawkins of music. That word genius is used a lot but when you hang around with him for any time at all, even in the elevator in silence, you know you’re in the presence of a very supreme architect. Just being around him you can see that this person is wired differently – he’s like da Vinci or Picasso. He’s the real deal. He’s a genius, genius, genius, genius, genius.

He’s very generous and very considerate and very encouraging. To play with Wayne for me has always been special. I think one time he said playing with Carlos is like being two young children in a sandbox: get a big shovel, a big bucket and dig in! (Laughs)

He’s got a different way of seeing the world, hasn’t he?

Yes. For example, one time he heard another saxophone player who was playing really fast with a lot of notes and Wayne is not into criticising or anything like that, however, he made a comment that had a lot of insight. He looked at me and said you know you have to think faster to play slower…and you have to think slower to play faster. I was like, dang!

He totally is. So is Herbie Hancock. He is another master, a monster genius freak, and when I say ‘freak monsters’ it’s a supreme compliment. Jimi Hendrix was a freak and a monster. I give freak and monster good names because it’s totally outside of the normal. Normal people are extremely boring and predictable so I love monsters and freaks.

What’s the story behind ‘Corazon’ itself? It’s your first all Latino album, isn’t it?

Yes, it is the first with that clarity of intention but it started from the mind of my brother-in-law and manager now, Michael Vrionis – he’s the one who implanted that idea in my head. He said ‘hey, what you think of doing an album in Spanish and Latino?’ I was like: what!? And so, one thing led to another and it’s amazing how the universe rewards the intensity of your intentionality. That’s a big secret. I’m giving you a clue for a lot of people. When you set forward with intensity of your intentions people come to open doors for you – like Clive Davis, Bill Graham, Claude Nobs and Michael now for me is. And then there’s a whole bunch of people who line up and they believe that their lifestyle will benefit from joining with you because right now Santana has a momentum. Santana’s like Usain Bolt, you know, the runner – we have what he has: we have traction, we don’t crawl. This album conceived about a year and a half, almost two years ago, just on a whim and an inspiration. When we finished a meeting about going after songs we got them and we started matching them to people – like matching glass slippers to Cinderella or ‘Cinderfella.’ Once we did that somebody said ‘wow, it’s going to be really interesting to watch the Latin Grammies.’ And I said well why stop there? I said why don’t we go all the way to the World Cup and people were like: what?! But strangely enough, we’re playing at the World Cup

Yeah, we’re playing at the closing ceremony with (ex-Fugee) Wyclef. So yeah, can you believe that? So I’m telling you, this is for all you young musicians in the garage right now. Dip your arrows with a lot of intensity and watch the universe set the bull’s-eye for you. There’s no such thing as luck or chance or fortune. You attract who you are.

What was the experience of working with Ziggy Marley like?

Oh man, it was beautiful. He gave me a big hug and called me like me Uncle Carlos. He feels that his daddy, one of my heroes, is my brother – and he is. I consider John Lennon and Bob Marley and Michael Jackson my brothers. These people are outside of time. Totally memorable, you know. So when he met me, he realised that I’d been doing this thing as long as his dad. It was a great honour for him to see me with those eyes.

What’s been the highlight of your life so far?

The highlight of my life is watching Salvador, Stella and Angelica pop out of the womb – my children. Listen it’s an incredible highlight to play at Woodstock, or make ‘Supernatural’ or this one (‘Corazon’) and play with Miles Davis and Stevie Ray (Vaughan). But I’m telling you, man, when you’re in a room and you see Salvador, Stella and Angelica come to be from another part of dimension, I was like wow, isn’t this incredible? This is the only way that you can come to the planet. You know you can’t come here through a microwave. It’s the only way. It’s the only way for millions and zillions of humans – the only way is to come out of the womb. That’s incredible. I recommend it to fathers: don’t miss it, get a video camera if she lets you (laughs). It’s mind blowing to see such a sacred thing. We should show it on TV all the time instead of shooting, instead of Rambo so much.

‘Corazon’ is out now via RCA.