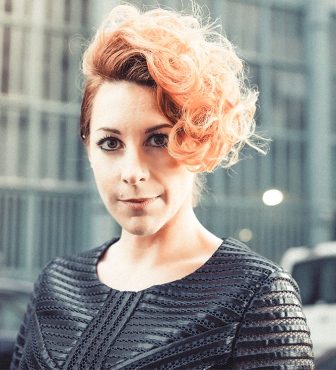 Blue-eyed soul sister ROBIN McKELLE won the hearts of the soul community with her last two long players. Backed by the redoubtable Flytones, both 2012’s ‘Soul Flower’ and ‘Heart Of Memphis’ from two years later were both packed with classy, passionate modern soul. Songs like ‘Fairytale Ending’, ‘Love’s Work’ (a duet with Gregory Porter) and ‘Control Yourself’ became instant classics and on the back of the albums, Robin’s live shows (especially in France) became sell out affairs.

In April Robin is set to release a brand new album – ‘The Looking Glass’ and the ten tracker has a few surprises in store for Robin’s fans. First and most obvious surprise is that there’s no mention of the Flytones in the billing or on the credits! So when we met up with the Rochester singer/songwriter to talk about the ‘The Looking Glass’, the absence of the Flytones was the first thing we wanted to know about….

Yes, after working with the Flytones (which was a name I had given my band) I decided that it was time for me to step outside my comfort zone, once again, and to try something a bit different. I wanted to evolve my classic soul sound to more of a modern fresh sound. I wanted to really focus on my song writing and challenge myself to make an album that was more personal.

So will the old Flytones still be working live with you?

No, the Flytones won’t be touring with me this time around as I have a new band. This keeps things fresh and there are new chances for musical spontaneity and creating new moments without preconceived notions and limits.

Fair enough … so what about this new album … why the title…. ‘The Looking Glass’… what’s that all about?

The songs on this album are more personal and intimate. More of a reflective feeling and the title is a double-entendre because while making ‘The Looking Glass’ I was doing a lot of self exploration and was forced to look deeply into who I am and what I really wanted to say. It’s like looking in the mirror and accepting all of the parts of who we are.

You’re also using a new producer, Steve Greenwell… why him, tell us about his CV and what the pair of you set out to achieve with the album?

Steve has been working on records over 30 year and has an expansive knowledge of music. He’s probably most famous for the working with Joss Stone on her records so I originally was drawn to him because of that. He helped me to allow the music to evolve organically and really pushed me outside of my comfort zone. He challenged my song writing process and made me really think about every line… music and lyrics. His role was more to guide me through the process and help me to see the possibilities in the music and the process. We started with tracking drums first which really helped to shape the sound of the whole record. It was crazy to me, but I can see why he did it now!

OK, so how would you describe the sound of ‘The Looking Glass’….Sonically it’s a little different to your last two, I think. There’s still a soul undertow…. but also I can hear hints of Americana (I’m thinking of the song ‘I’m The One’)… are you steering away from soul… looking for a new, maybe more mainstream audience?

Sure, it is different but no, I wouldn’t describe it as Americana. Yes, there are hints of country maybe in’ I’m the One’ and ‘Down Without A Fight’, but I feel more of the songs are written with a real classic song writing approach. I think of writers like Carol King and Elton John. Tracks like ‘Gravity’, ‘Stay’ and ‘Advantage’ are really derived from classic soul influences but produced in a modern way. The grooves and drums and bass are really driving these songs. I’m writing and singing soulful music without doing a retro thing or a totally neo soul thing. No, I’m not steering away from soul, I’m just being myself.

What song on the album would you stay sum up where Robin McKelle is right now … and maybe where she wants to go?

After a few listens, I’m loving ‘Brave Love’. For what it’s worth, to me it’s maybe the set’s most soulful cut – tell us about that song

Excuse me for laughing, because I knew when we finished this that it would be well received in the UK! The funny thing is, this song was a bitch! We went around and around with how to make it work. It almost didn’t make the album until the very last session when Ray Angry (the pianist) came in and put the pianos down. I had already done my vocals and something was totally missing… the piano changed everything. The riff has a little Robert Glasper thing going on.

What other songs in particular would you like to draw our attention to?

I’m a fan of ‘Stay’ and I really dig ‘Yesterday’. But, of course, ‘Stand Up’ is the lead single and we had a great radio mix done in London by Neros. I love remixes!

Something else that’s different on this album is that all the songs are originals… why no covers this time?

Man, you know, you just can’t win! When you do covers people ask why not all originals and vice versa…. No covers? Just because. These are my stories, this album is personal. That’s it… simple

How will you be promoting the album……?

Not sure what you mean? Do you mean by touring and interviews… you know. Or do you mean like are we promoting it a soul album, or as a pop album? I’m really trying to stay away from genres. I want to be known as a modern artist. People and press can label the album how they want to but I want my music to appeal to people that LOVE music, people that enjoy the work. People that listen to the Beatles as well as Coldplay and Sharon Jones and Gregory Porter.. . This is an Adult album. It’s not geared towards kids!

Realistically what are your hopes for ‘The Looking Glass’? You know, the last two albums were critically acclaimed but did they make a huge difference to your profile?

I’m always realistic but my hope for ‘The Looking Glass’ is that people get exposed to it and have the chance to see for themselves if they like it. The music world is so saturated and it’s hard to reach people so I’m hoping that I can reach a bigger audience than before and continue to grow my fan base so that I can tour more! My last two albums helped to establish that I am an artist who writes her own music and is singer not to be categorized. I’m not a Jazz or soul singer… I’m an artist… my voice is my instrument.

How hard is for a “proper singer” …. an “artist” (like you) to make a living right now. It’s clear that you love what you do… but does it pay the bills and are you envious of TV talent show winners who seem to have success handed to them on a plate? Ever been tempted to do a TV talent show?

I’m really fortunate because I had a great success in 2006 with my first album and started touring a lot because of it. I am lucky to be able to live comfortably… I tour a lot and I have my own label and I own all of my music. It’s really important, especially as a writer because that’s really how we make the most money. I actually was approached a few years ago to come to a private audition for the Voice in the US but I declined because you have to clear your schedule for the following year and I already hade several tours and shows lined up… and I was getting paid for them. Those shows own you after you are a part of them. It’s not what I’m trying to do. Yes, great for exposure but I want a career with longevity. There are so many shows now like this that you can’t even remember the winner for season to season.

Your web site always shows a lengthy touring schedule… lots in France, of course,… will you continue to tour France and what about another trip to the UK… and, hey, come up North this time!

France is really good to me so of course I will! Yes, I want to come more to the UK. I am trying, believe me, we are working on it! It’s been extremely difficult for us to find an agent motivated enough to work with us ! Anyone out there ??!!

ROBIN McKELLE’S ‘THE LOOKING GLASS’ is released on Doxie Records on April 22nd.