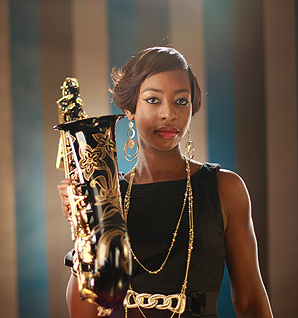 Double MOBO winner, YOLANDA BROWN is a rising star in the UK jazz firmament. The sax player and music biz entrepreneur has two acclaimed albums under her belt and is right in the middle of an extensive UK tour. Add to that experience with people like Alexander O’Neal, Mica Paris, Soweto Kinch and The Temptations and plenty of extra-curricular activities (YolanDa’s a celebrity ambassador for the Prince’s Trust; is a Patron of The Mayor Of London’s Fund for Young Musicians; and she’s recently teamed up with the University Of East London (from where she holds an honorary doctorate) to create a new music award for students offering four grants to their Music Students. ‘Bout time then that we found out more. We caught up with Ms B and began by asking about her background and musical influences…..

I was introduced to playing musical instruments at the age of 6. I played the piano and violin and later went on to learn the drums. At 13 I decided I wanted to try the saxophone because I liked the sound and really wanted to play a wind instrument, I loved it and it quickly became my favourite instrument to play and express myself through. My Dad would always have music playing at home and I was able to listen to all genres of music – reggae, latin, classical, folk, opera, rock, pop… you name it, I heard it! I think that has really influenced the music I play now, I love to mix genres of music.

What about your early experiences in the music business?

I think the main experience that comes to mind is building up the YolanDa Brown brand alongside my Manager independently (with no record label) and finding creative ways to build and keep in touch with an audience. The first major experience being my first solo concert in 2007 at the Mermaid Theatre in the centre of London. We sold out the 600 capacity venue that night with just me and some special guest duets on the bill. It was really rewarding and the start to an exciting musical career.

On record, you debuted in 2011 with the album ‘April Showers May Flowers’. Tell us about that… What did it achieve for you?

Being my first full-length album project I was very keen to make a record that contained a lot of what I had experienced of music so far. I paid attention to the mix of genres that I enjoy and also the idea of telling a story with the music. During the writing process I leaned a lot on the life experiences I have had to help build song ideas. It was exciting to release and the response was great. It went to Number 1 on the iTunes and Amazon Jazz Chart and launched a worldwide tour, which has been fantastic.

Then last year you released a live version of it…. what was that all about?

The original album was a studio recording and it was great to be able to shape and build the songs over the recording process. My live concerts pull very heavily from improvisation and once we started to tour the album it felt like the songs came alive even more (which is always the case) but after a year of touring I really wanted the listening audience to experience some of what was happening on the stage. So we went to Under the Bridge in Chelsea and recorded a live session of the album in one take and filmed it for DVD and released a CD/DVD package.

When then can we expect a brand new album and what will it be like?

I have been writing over the time of touring and will be back in the studio recording at the end of this year. This new album stems from the idea of “music you can move to”… watch this space!

Now tell us about the extensive work you do outside of music – Princes Trust, awards, work at the University of East London…

I think it is very important to give back. I remember being a young musician and wanting access to people in the industry to help and guide me. I am an ambassador for the Princes Trust, which helps the young and unemployed and also a patron for the Mayors Fund for Young Musicians, which helps young musicians fund the learning of a second instrument. I also am an ambassador for the Yamaha Class Band, teaching young students to play wind instruments in a class ensemble and I am very excited to have launched my own foundation – The YolanDa Brown Foundation and started an award with the University of East London which helps young music students launch into a career in the music industry.

Very busy, then – do you still listen to music too… I mean for pleasure. If so what do you listen to?

Yes, I do! I listen to all types of music. Some favourites on my playlist at the moment are Justin Timberlake, Monty Alexander, George Duke and The Yellow Jackets. My listening habits change daily!

You’re in the middle of a tour… how is it going?

I love touring, it is the best part of the job! Playing music live and meeting new audiences is what I enjoy the most. Being back on the road is really exciting and the feedback from the shows has been fantastic. We have been filming a tour diary so stay in touch to see what we have been up to!

What can audiences expect from your shows?

A YolanDa Brown show is very interactive and the audience get to know more about me and the meaning behind my music. They get to hear original music along with different interpretations of songs they may know – it’s a musical journey. I love to mix in different genres of music and aim to make the audience move, reminisce and feel something. It’s music for the soul and music for all!

What’s your main ambition and where do you see yourself in five years time?

My main ambition is to keep doing what I love – playing music to a live audience! The aim has always been to make YolanDa Brown a household name and in five years time I want to be on a full world tour and collaborating with great artists. I also will have my foundation fully running providing opportunities for musicians and providing instruments to less privileged children and students around the world.

Both YOLANDA BROWN’S ‘April Showers May Flowers’ are currently available and our news archive has her remaining tour dates.