REASONS TO BE CHEERFUL – THE JAMES DAY INTERVIEW 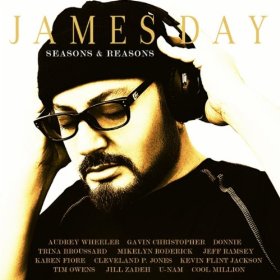 It’s the time of year when most soul music journalists aren’t so much preparing for Christmas as stressing and fretting over their editors’ demands to submit a list of their Top 10 albums or tracks of the past year. It’s often – as I can confess from experience – a difficult task and it’s been made even harder – or easier, depending on your point of view – by the late arrival of a set that’s a bona fide contender for modern soul album of the year. Disciples of ultra-smooth modern soul won’t be surprised that the album in question (‘Seasons & Reasons‘) comes from JAMES DAY, a noteworthy songwriter originally from Rockport, Massachusetts, who has made an impact with record buyers due to his two previous albums (originally issued in the UK via specialist soul label Expansion), ‘Natural Things‘ (2007) and ‘Better Days‘ (2009).

‘Seasons & Reasons’ reunites Day with some of the singers that have previously fronted his material before – namely US veterans Audrey Wheeler, Gavin Christopher as well as former By All Means chanteuse, Mikelyn Roderick. The album has been released independently and it’s available from most download websites. But for those who prefer to buy their music in a physical format, the UK-based record store/label, Soul Brother, is the only place in Europe where you can get hold of ‘Seasons & Reasons’ in CD form. SJF’s Charles Waring recently caught up with the talented soul songwriter for a candid tete a tete in which the Massachussets native talks in detail about his new album, the process of songwriting, his influences as well as his ambitions…

What’s the background story to your new album, Seasons & Reasons?  What made you want to pursue a seasonal/holiday theme?

It takes you through all kinds of love…not just romantic love but family love, parental love, and spiritual love…even self love (or lack thereof as in ‘No Son of Mine’) but I wanted to counterpoint that story with the wonderful parental/self-love message of ‘WWYD’ (‘What Will You Do’).  I feel like the holidays bring out a lot of emotions and it would be the best time to put out a record of this scope, even though it has songs for all year round.

How does the album compare with what you’ve done before?

I upped my production level with the help of my friends Unam, Noah Lifschesy, Underground Productions, Jim Gately, Chillhouse Studios, Tyrone Cobette, and every musician on the record.  I played in a few new musical sandboxes I hadn’t in the past…I always wanted to play with a Chic groove and do a Broadway type melody/lyric such as ‘WWYD’.  I always love old fashioned Christmas songs and got to do a couple of them.  Then I got to bring back the duet and was always a fan of Deniece Williams & Johnny Mathis, Donny Hathaway & Roberta Flack, Patti Austin & James Ingram.  I think ‘Considered Delivered’ and ‘Celebrate Our Love’ are compositions worthy of any of those pairings and that my singers really delivered them beautifully on this record. I’m really proud of how this album turned out…and I loved introducing some new wonderful singers like Cleveland, Kevin & Karen in the mix of the all stars that I love.

How would you define your own musical style?

New classic soul…influenced by music as early as the standard, thru ’70s ’80s and ’90s Pop/R&B…I even put a lil’ rap and slightly more contemporary elements on this one without leaving my zone.

You don’t – as far as I know – appear as a singer on the album. Do you sing at all – and if so, why don’t you appear as a vocalist on your own recordings? Have you ever performed any of the songs live? (or do you plan to?)

I sing the demos…and I’ll sing parts and arrangements in the studio when recording…but when you’re surrounded by the singers I am why would I want to put my voice on there just to prove that I can sing ok?  I want great not OK and while I do have an ego, I won’t let it get in the way of a song sounding the best it can.  Maybe one day there’ll be a song that’s right for my voice but usually I can find someone who can sing it better.  The other answer is that I have Menieres Disease and am deaf and dizzy on one side with constant tinnitus, so it’s harder to record in tune than it was before that happened in my 20s.  I’m just glad I found a way to get music out of my head and onto a record and that folks this talented want to be a part of it.  When Lalah Hathaway recorded one of my songs on her last album (‘Dreamland’ on ‘Where It All Begins’) I knew I could die a happy man.

You have Audrey Wheeler and Gavin Christopher featured. They’ve performed on your albums before. What are they like to work with? What unique qualities do they bring to your music?

They are two of my favourite voices. I love their tones, textures, and delivery…they also were hit solo artists at the same time and I owned albums from each of them so it’s a dream to have them sing on my records.  As far as working with them I’m just blessed…they couldn’t be more delightful, beautiful, generous people inside or out and it’s always nothing but a joyful experience.

Cool Million remixed Rewind. What’s your assessment of them as musicians/producers/artists?

I love them. They have a real knack for making songs work for the dancefloor and I wanted that on this record.  It was a dream of mine to have them remix one of my songs and they were very kind to do it.  I added the sax by Joe Cunningham to it to flip it up a bit more from the single version and am really happy with the result.

How did you find the singer Cleveland P. Jones?

I heard him with Ahmed Sirour on UK Radio with the song ‘Sensitive’…I stalked him till he said he’d work with me. He’s amazing; we are doing more collabs now I am really excited about. His voice inspires me to write about important things.

What’s the story and inspiration behind your song ‘Christmas Valentine’?

I wanted to write a really classic holiday song like Nat King Cole would have sung…then when I decided on the singer, the amazing Mikelyn Roderick of By All Means, we came up with the ‘Diana Ross in Lady Sings The Blues’ approach. Dow Brain’s keys and Gary Schreiner’s harmonica were the icing on the cake.