RAPPING IN THE RED ROOM. THE SHAUN ESCOFFERY INTERVIEW. 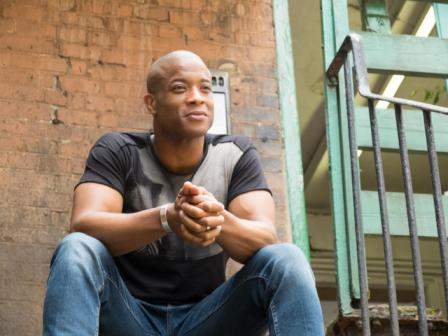 UK soul man, SHAUN ESCOFFERY set the soul firmament alight with his 2001 hit, ‘Space Rider’. That was quickly followed by ‘Days Like This’ and then some dance work with people like DJ Spinna. Then, after a covers album, ‘Move Into Soul’, young Shaun, it seems, dropped off the radar. Now he’s back. His new album ‘In The Red Room’ has garnered critical acclaim and cuts are being played regularly on some of the most discerning soul stations… a great “comeback” you might say. But is ‘In The Red Room’ really a “comeback”. We met up with Shaun and put that question to him….

I suppose it is a comeback album of sorts… It has been a long time since I’ve released a body of work. And for me it’s just been a case of having something to say musically, and having the right elements in place to make it happen. And just enjoying the process of making music and falling in love with the process of making music again. Its been a real labour of love making this album.

After I had finished the “Move into Soul” Album my career took a slightly unexpected turn – one that I was not expecting to be honest. I started acting on TV, musicals and plays etc. One of the Plays I performed in was at the Donmar Warehouse in Covent Garden London. I was nominated for best supporting actor in that play. And I’m currently playing King Mufasa in the musical “The Lion King” in London. So as much as I’ve still been writing, the acting side of things has been something I’ve been deeply involved in the last few years.

You broke through back in 2001 with the still lovely ‘Space Rider’…. what do you think about that song now?

I wrote ‘Space Rider’ with Geoffrey Williams and I still love that track. It’s a timeless song and one that I’m very proud of. Making that first album was a great time, good vibes.

How different – or indeed difficult – is it now for a UK soul singer to get a deal and recognition than it was back then?

The music industry has changed a lot in the last ten years. And it has always been difficult for UK soul singers. But I think the industry has changed so much now that it’s difficult for anyone wanting to get a foot into the industry. With all these reality TV shows I feel that the mind-set has changed, people feel that success is an overnight thing, but they fail to realise that the vast majority of us have been doing this for a long time.

OK, let’s talk about the new album…. why the title?

The studio we’ve been working in is called the “Red Room” so coming up with a name for the album was an easy one… No brainer!

How did you hook up with Gil Cang? His credits include work with Michael Jackson……

Gil got in contact with me and sometime later we had a meeting at his studio. We hit it off straight away. It works because we have the same vision and it’s all about the music…And the rest is history in the making.

What kind of sound/feel were you hoping to achieve with the album?

The feel we wanted was that old authentic soul sound with live musicians. I wanted to experiment with a falsetto vocal to capture a vibe. And I’m very happy the way the album has turned out. Also there so many things I’m yet to express creativley so musically I am very excited, more so than I’ve been for years.

I’m really liking ‘Nobody Knows’ … for me it has sixties feel, what’s your take on this track?

Thank you. Yeah ‘Nobody Knows’ has that sixties vibe. This track we came up with the hook first and then the Guitar groove and it kind of took on a life of its own. But yeah love the vibe and groove of this track.

Then there’s the big ‘Get Over’ … what was the template for that one?

It was more a feel and a vibe than an actual template. We wanted to capture a Curtis Mayfield vibe, dealing with life’s struggles and the fact you gotta pull yourself up first to get over troubles.

‘Nature Call’ is another big tune…and there’s a video directed by Idris Elba – tell us you became involved with him?

Idris is a very good friend of mine. I’ve known Idris for well over 20 years. He didn’t direct the video but has done a great remix for me of ‘Natures Call’… Idris as well as being a Fantastic Actor is a great producer and musician in his own right. We have worked on a few projects together throughout the years.

The album’s released on Dome… tell us about that relationship; they do champion UK soul don’t they?

I’m very pleased to have signed to Dome. They have been great so far. And I’m looking forward to working closely with the team for the project and future.

Finally, what do you – and indeed the Dome people – hope to achieve with ‘In The Red Room’?

I suppose for me personally I would like people to like my work and if they like it to support it. I think from the record company perspective they would want it to reach as many people as possible and again to be successful.

SHAUN ESCOFFERY’S ‘In The Red Room’ is out now on Dome Records. Access a review via our archive.