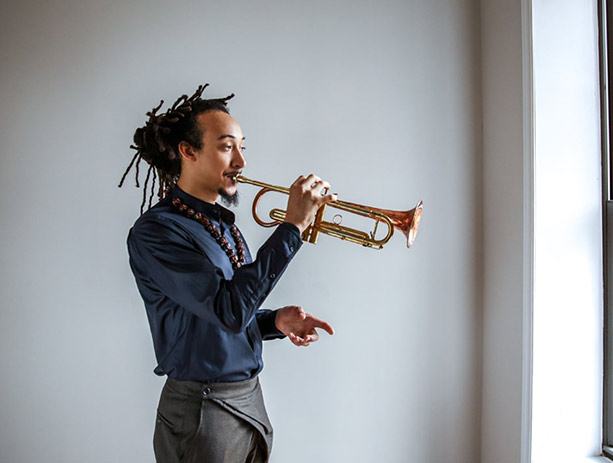 You mentioned Shanghai, where you first met Dee Dee. What took you to China, because you spent several years there, didn’t you?

I got offered to go out there with a band. It was very old school, the way they do it – or did it. It’s not like it was now. There’s a famous celebrity named Lin Don Fu (pictured left) and he’s most famously the voice of Darth Vader in the Chinese overdubs of Star Wars, but he’s a great actor of all kinds, especially in China, where he’s well known and a celebrity. He also has I kind of Oprah like talk-show and he always plays blues and jazz. He likes Muddy Waters and old school bluesman like John Lee Hooker. He walks in the bar singing ‘Hoochie Coochie Man.’ So we built a club in the style of House of Blues and Jazz and brought over a blues band for 3 to 6 months and they play three shows a night six nights a week and then he brings over a jazz band. I don’t know how lucrative it is for him but he comes up there and sits in the club every night and loves the music, which is a real happening. At that time there were only two clubs there in a city of 28 million people. The beautiful thing about it was he brought us over and we had a chance to not only get our shit together because of playing – I was 22 – three shows a night six nights a week. So I did 30,000 hours of training. No matter what happens you’ve got to play and entertain. Once I did that I came back to the States for a few months and I just couldn’t get that amount of work. It just doesn’t exist. A lot of my elders at the time were like man, you should go back over there and continue to do that as long as you can because that’s developing you in a way that over here can’t. So I went back over there and I really developed my own sound, my own personality, with my own band and a lot of my own music and learned a lot of traditional repertoire and had a chance to really display it. And then that evolved into me doing a lot of freelance work over there and TV work and I eventually managed a venue for a few years, doing  the bookings –  and of course, I booked a lot of times myself and maintained that and started bringing over guests, like the Afrobeat band. Dee Dee met me at the precipice of all of that in my fourth or fifth year in for me. When she saw that she said you really need to share that with the world market. This is too developed for you to do just keep it here, in a place where there is no market for it. There’s no touring or record stores or labels or stations. It’s just literally people coming to see you all the time.

It was. It was a golden period. A lot of people ask me now, should I go over there and do that? I say it’s not there anymore and I encourage them to find a new, emerging market. I wouldn’t risk any money in it but I guess places like Brazil, India, Russia, and Ukraine are places where they’re starting to have people coming into a middle-class that want entertainment.

Going right back, what attracted you to the trumpet in the first place? Was it a record that you heard?

I’ve always been into music and I think growing up as a child I always loved the heavy horns and the brass sections in bands like Earth, Wind and on Machito records and anything that had a huge, fat horn sound like big bands and orchestras. My favourite part was when the brass came in (laughs). When I got an opportunity to pick an instrument in junior high school I just gravitated towards the trumpet and then I got to understand my legacy and my grandfather’s legacy of playing the trumpet but that came later.

You mentioned your grandfather, the legendary Doc Cheatham. What memories do you have of him because you were quite young when he passed weren’t you?

I was, I was about 12 years old. I’d seen him play a lot and spent a lot of time with him. I just remember the type of man he was. He was very, very dignified, very classy, just a gentleman, extremely polite, well-versed and well-spoken. He spoke many languages, he knew how to greet people and have conversations in multiple languages and knew how to take care of himself. My grandfather lived to be 93 years old. He did not consume alcohol, he rarely ate meat, and when he did, it was things like liver – things with very high nutrients in. He always ate very big meals early in the day, then by the evening his meals was small. My grandfather had food processors and made his own alkaline water. He had juicers and I still have some of these machines. And it’s amazing how much they haven’t changed.

What did you learn from him on a musical level?

Doc Cheatham always played just what you’re supposed to play. You only heard what you needed to hear with him. You didn’t need to hear a whole bunch of shit. He was somebody that was always just playing the melody, the most melodic that he could, and beautifully and with such perfection in playing the instrument. And the trumpet is very hard instrument to play that beautifully. He knew the legacy of his instrument. He knew King Oliver and Louis Armstrong and learned under them as well as people that were younger than him: people like Clifford Brown. I found his transcriptions of Clifford Brown at his house so he was always open to learning and expanding himself and ways maintaining the truth of who he was and having his own voice.

And that’s an example that you want to follow, I take it?

Absolutely, I think he may not dig the eccentric-ness of my music and the wildness of it or the intensity, but he would certainly commend the fact that I’m being myself and not following somebody else’s vision or sound or style.

You also learned a lot and I suppose when you studied at Oberlin College. What was that experience like?

Oh man, I was hanging out with Donald Byrd and Marcus Belgrave, Gary Bartz, Billy Hart and Robin Eubanks. You can’t match that, having cool teachers. Those guys are more than teachers, they are fountains of knowledge. They’re Jedi Masters, so it’s like you train, you follow them, you sit in on their gigs. A lot of them would do gigs with me locally. I’d book a gig featuring Marcus Belgrave and he would come and play with me all night, so too Gary Bartz or Billy Hart. They really know how to show you what living this music is all about because they are still living this, you know, they’re not school teachers.

What was Donald Byrd (left) like as a teacher?

Intense. Donald Byrd was a very intense person. He didn’t sugarcoat anything. He was just straightforward. Me and Donald Byrd would hang hours into the night in his office. I would just compose in front of him and he would come and show me different techniques to get what’s in my head out and he would show me how to simplify. He told me never to filter what was coming out, just get it out, because its inspiration and it’s divine. Afterwards he showed me to reduce it down to only what’s necessary in order to try and convey what you’ve composed. He showed me stuff like Dizzy Gillespie showed people and what Lee Morgan showed people, so he linked me in with some trumpet knowledge that masters has passed on to their students. That was invaluable.

Do you think given your familial connection with Doc Cheatham and the fact that you’ve studied with Donald Byrd that you feel part of the lineage of American jazz trumpet history?

Oh yeah, instinctively, I’m a part of it I think but I’m humbled to even be involved in it. I think the reason why I got in the door with Gary Bartz, Donald Byrd, Marcus Belgrave and people like Roy Hargrove and Wynton Marsalis is the fact that my grandfather was somebody that they looked up to and that they spent time with and that they learned knowledge from. He comes a point when people are students and then one day they’re the teacher passing on the message to another student that’s connected to the legacy that they learned from.

The American jazz scene is really healthy right now. I find it a very exciting time; people like yourself, Christian Scott, Kamasi Washington, and Marcus Strickland. What’s your take on it? Do you feel part of a new movement in jazz?

I think what’s happening right now with this scene is that people are paying attention to it. All these artists you mentioned, myself and others, including some that you don’t know about just yet, have always been doing this and pushing the music. And now there is a resurgence of interest. In the ’80s and ’90s it was all about Kenny G and Wynton Marsalis. Kenny G was just like the resurgence of pop-jazz – like a bastardisation or misinterpretation of Grover Washington Jr – and Wynton Marsalis led a jazz revival movement. Now those people who turned away from jazz in their youth and in their prime when that was the message are now older and younger people who weren’t around for Kenny G and Wynton Marsalis in the ’80s and ’90s, are now coming of age and as teenagers are hearing Kamasi Washington, Christian Scott, Robert Glasper and myself and others of course, and that’s giving them their introduction to jazz. So they don’t have this negative connotation or this suit-and-tie traditionalist connotation of it. They’re being exposed to it on a very contemporary and accessible level so I think that’s just bringing the attention back to the music that’s always persevered even when it wasn’t in the spotlight.

Looking forward to the future, what plans do you have beyond this album?

My new album’s just came out and I’ve got to do my work spreading the vibrations across the globe on it. We’ve got to get touring and continue to push it and spread it…but I’m always looking for the next challenge. I just did a recording with Kareem Wiggins on Common’s new album and a few other rappers so I’m going to branch out into some other things. I’m working on some orchestral pieces and really diving into the world of music more and more and want to explore that a lot deeper. Some I’m going to do some soul journeying and some travelling and it will come.