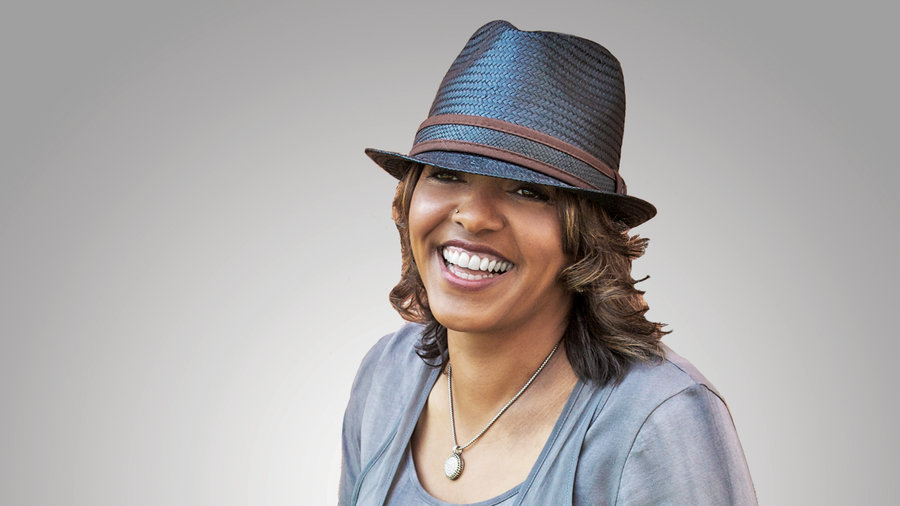 It’s a sad and sobering fact, perhaps – especially in an era when feminism is a potent social and political force and equal opportunities are encouraged – but the world of jazz remains a musical landscape mostly populated with men. There have been plenty of noted female singers, of course, throughout the idiom’s history but women instrumentalists have been much thinner on the ground. Even in these supposedly enlightened times, gender barriers still exist and it’s still hard for women to make their presence felt in an environment that has traditionally been an all-male preserve.

But there are some women currently making big waves in jazz – Grammy-winning composer and orchestrator, Maria Schneider, immediately comes to mind, as well as the Japanese pianist Hiromi. Even more of a rarity are female drummers but another Grammy-winner, sticks maven, TERRI LYNE CARRINGTON, has been successfully plying her trade for over thirty years now.

As such, she’s a unique figure in jazz – a pioneer, even – and certainly is an exemplary role model for aspiring female jazz musicians to be inspired by and emulate. Interestingly, the Boston, Massachusetts-born musician – she’s a composer and producer as well as a drummer – is due to fly in to Britain’s second city, Birmingham, for a concert on Sunday 21st May at its prestigious Town Hall venue. Terri Lyne will be bringing her own band and focusing on material from her most recent album, 2015’s Grammy-grabbing ‘The Mosaic Project: Love & Soul.’

For those wishing to get an insight into her playing, she will also be holding a drum master class-cum-workshop for local students and musicians the next day, Monday 22nd May. Both promise to be illuminating, must-see, events and have been curated by Birmingham’s Jazzlines organisation as part of its ‘Women In Jazz’ project, which was initiated in 2014 to aid and encourage female musicians to get into jazz.

SJF’s Charles Waring recently spoke to TERRI LYNE, who reflects deeply on her life as a woman in jazz and shares her thoughts about some of the experiences, challenges and judgements that she has faced …

How do you think more women can be encouraged to take up playing jazz as a profession?

Interesting that you asked this – I have been thinking about this a lot lately. I feel expectations need to be higher for women playing jazz so that it is in alignment with a stronger result. If we expect women to be great playing jazz, then there will be more great jazz women. If we have low expectations then it will be harder. So everyone needs to look at their own perception and attitude to see if it is encouraging and supportive or not. Women need to feel welcomed into this boys’ club and feel that their voice is appreciated – that their perspective is appreciated and valid. Not that it needs validation by a man or anyone, but support is important and helps to build self confidence. We can all do better with this. Even other women.

What challenges did you face as a woman in the male-dominated jazz world when you were starting out in your career?

I started so young that I did not realize that there were challenges or misogyny or issues to think about in that regard. I just did what I liked and was driven to do. Later on – more recently – I have felt that it is harder for me to be accepted as a producer and composer – that there is another barrier there to be looked at. And of course just as a drummer, there have been some people that were not the most supportive, but I must say overall my experience was different than most other women. I had a Dad that knew everyone in jazz so it opened doors for me and made my experience much easier than some of my female peers.

Did you feel that you weren’t taken seriously by some people in the jazz world because you are a woman?

I guess some, but I really did not feel much of that. I just did my thing and either people liked it or not. I was not deeply concerned about the people that did not because there were so many amazing musicians that were supportive, so I had no real reason to focus on the others. But I do recognize that this is the feeling of many other female musicians. and I recognize that to be valid and an important factor to address and do our best to change.

Female jazz drummers are something of a rarity – what or who inspired you to take up the drums in the first place?

I used to be offended when someone said female drummer or female jazz drummer. I would reply that I am a drummer and let’s leave it at that. But the fact that I am female is a plus for me, not a minus. I have had to train myself not to look at my being female as a negative. It gives me a different sensibility on the instrument. I have learned to be aggressive and seductive at the same time. It is natural for me to be that way in life and in music, so it’s easy for me to connect the two. I know it is not like that for everyone. As far as inspiration, my Dad was one of the first people I saw play drums. So he was an inspiration for sure. Also, all the masters that he took me to see. Starting with my teacher, the great Alan Dawson. But also Art Blakey, Roy Haynes, Max Roach, Buddy Rich, Elvin Jones and my mentor Jack DeJohnette. They were all important to my development, as well as so many other great drummers of that time period.

Was it discouraging having no female role models who were jazz drummers when you were young?

No. I did not know the difference. I did not feel out of place plying drums, so it was not such a big deal for me. I can see now that some young women needed to see others doing this, so that they felt they could do it as well. My story is different because I started so young – before you see sexism and racism and all of those things that can debilitate you. I was fortunate to be shielded from those things in a way until I was older and able to have my own thoughts about it all and not accept things that were not true to me.

Did you feel that you were a pioneer by being a female jazz drummer?

I do feel that I have pioneered in a way. There have been others around my time, but I feel I accomplished more than women that came before me – to play with Wayne Shorter and Herbie Hancock, was important because playing with these masters gave me credibility – and knowledge – and that was very special.

Who has been your greatest teacher? From which musician did you learn the most from?

I cannot pick one. That is silly to even think like that. We are all works in progress and on a constant path of learning and enlightenment. I try to learn from my students as well as my teachers. I can hear a local drummer in a small town do one thing that really knocks me out. That means he or she is my teacher for that moment. I try to remain in the moment and stay open – that is very important when we decide to play this music. The world is my teacher and I pass on the information.

What future recording projects do you have in the pipeline?

A new band called Social Science featuring Aaron Parks and Matt Stevens, as well as Morgan Guerin. We are dealing with social issues and speaking our truth about the world as we see it right now…

What’s been the biggest highlight of your career so far?

There is not just one. Playing with Herbie Hancock and Wayne Shorter has been extremely significant. Also receiving three Grammy Awards has been an honor and something that feels like a highlight. But being with a student when a light bulb goes off in their head and they understand something – that is rewarding as well in a different way. It is all a part of the big picture. And all interconnected. The universe unfolds as it should so one great experience leads me to the next. I will do my best to remain open to them all.