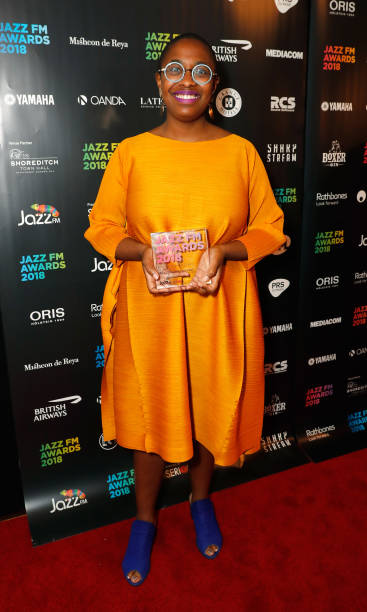 To say that double Grammy winner Cécile McLorin Salvant is happy is an understatement. Her wide, beaming smile is almost beatific and it looks like she’s finding it hard to contain her emotions, which run the gamut from open-mouthed disbelief to blissful euphoria. She’s just come down from the stage area at London’s Jazz Fm Awards ceremony, where she performed a stupendous version of Jimmy Rowles’ classic song, ‘The Peacocks,’ accompanied by her long-time pianist and musical collaborator, Aaron Diehl.  She hasn’t walked off stage empty-handed either, and clutches the award for Jazz FM’s International Jazz Artist Of The Year.  After the photographers have had their way, it’s off to a secluded room – in this case the council chamber at Shoreditch’s town hall – for press interviews. This was where SJF’s Charles Waring, suited and booted in his best evening wear,  caught up with the Miami-born chanteuse for a quick Q&A…

You looked really shocked when you received your award.

I was. I came here to sing a song and that’s what I had in my mind to do. I was told, ‘you’re going to go on stage and sing a song, and they’re going to announce the nominees and who wins.’ So I was like, okay, somebody’s going to win and then I’m going to sing a song right after them. I didn’t have an inkling and I wasn’t prepared (laughs).

Now the shock’s worn off, how does it feel?

It feels great. It feels really nice to be encouraged and validated by an organisation that really cares about music and about sharing music to people, with people, and bringing it to people. With this kind of music, and especially the music that I do,  we really need all the help we can get. We’re not on the radio, usually, and we’re not pushed by huge marketing campaigns, so it really takes the passion of a group of people and an organisation like this to help us and support us and allow us to come to places like London and perform. I’m not so sure if I wasn’t on Jazz FM, and if I wasn’t given that amount of support, that I would be able to go to Ronnie Scott’s as often as I do. So Jazz FM’s almost like a first base of connection with a British audience, that I don’t get to see a lot. So the people at Jazz FM do this while we’re all touring in the US, but they continue to really give us support for everything we put out and that’s beautiful. So I feel super-honoured by this award but I’m also grateful because  Jazz FM has really done so much for me. It’s always a beautiful place to go to when I come to London. We perform there, and we talk to some of the radio people there. It feels really good.

Aaron Diehl was your accompanist tonight.

What does he bring to your music?

He’s very attentive. I’ve been playing with him for six years. We know each other really well. He brings a completely different colour to the music that we make and he’s so versatile and open. He just brings so many different textures to the music. And he’s very creative and he also pushes me a lot. So if I’m beginning to be in a rut, he will be like, all right, we need to get back to the drawing board. What are we doing? What’s the next step? How are we going to develop this? He’s a huge part of the sound that I’ve been putting out for the last six years. The music wouldn’t sound at all like that if it weren’t for Aaron so he really, really brings so much to the table and I’m so lucky to have him around.

It seemed as if you were almost operating on a telepathic level. Is it like that?

Yeah. We trust each other a lot. That takes time and it takes getting to know someone musically for a good amount of time to build trust and once you’ve built that trust, it’s easier to communicate, just like in life (laughs).

This isn’t you first award this year. Only a couple of months ago, your album ‘Dreams and Daggers’  won a Grammy.

It felt great and was shocking as well. I really don’t think about awards or what should be expected or what I should do, like when I’m recording. I just do what I want and how I feel, and to get an award for that, it’s just brilliant. It’s amazing.

Where do you go from ‘Dreams And Daggers?’ What are you going to do next?

I have a duo album, with a pianist named Sullivan Fortner, that’s coming out in September. It’s called ‘The Window.’ I’m also working on a song cycle about an ogress for next year. It’s an original story, I wrote it… but it’s not that original! (Laughs).

Yes, it’s the fairytale that keeps getting repeated in different forms over and over again. I’m writing the music and lyrics with a beautiful arranger named Darcy James Argue. He’s doing the arrangements for unusual instrumentation. There’s going to be a string quartet, a vibraphone, a guitar and banjo, piano, organ, drums, horns. So it will be a little different.

When are you recording that?

Well, we don’t know. We’re going to do four shows first in the US and if it’s not a fiasco, then I’ll record it, but if it is, I will not (laughs).

I’m sure, given your past track record, it won’t be a fiasco at all.

‘DREAMS AND DAGGERS’ IS OUT NOW VIA MACK AVENUE RECORDS