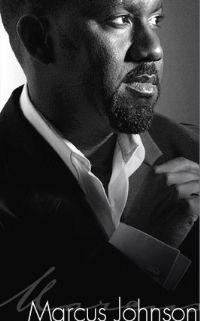 By general acclaim MARCUS JOHNSON’S ‘Poetically Justified’ album is one of the year’s best smooth jazz sets. It’s groove-heavy and so, so soulful, so www.soulandjazzandfunk.com caught up with MARCUS to talk about the album but first the piano man wanted to put us right about smooth jazz ….

I don’t necessarily agree with the branding of smooth or lite jazz for my music. I would like to think that what I do is just good ole music or an instrumental take on the urban groove that’s chic, sexy, and cool. Look, I studied jazz with GERI ALLEN at Howard University, and studied music from a car radio my entire life. My influences are RED GARLAND, OSCAR PETERSON, AND JAY-Z. Jazz is supposed to be a life story. Mine is unique and different from others – especially growing up in DC. And all I can be is me. So for those who label it lite or smooth, I offer them the chance to sit down with me – any day- with an acoustic bass player and a drummer and we’ll see just how smooth or lite I can be.

Fair comment – so who else have had an influence on your music and style?

My mother was my initial inspiration. She was the most incredible pianist of all time (to me). I used to sit under the piano and listen to her play for hours. She was a psychotherapist and never performed live but oh how she should have. It’s kind of funny because I used to end up in the same position under my father’s desk listening to him do business deals. I remember pretending to be asleep so that he would carry me to bed. I always knew that I was loved. But better yet, I was raised to be an individual. That is key to my success. My stepparents come in a close second. I know, though, that you want my musical influences here but I don’t think I can talk about QUINCY JONES, EARTH WIND AND FIRE, JOE SAMPLE and GEORGE DUKE without the influence of my parents and the exposure to the different types of music that existed. They were my conduit to the rest of the world.

Tell us a little bit more, then, about your musical background…

Although, many people were exposed to my music with ‘Chocolate City Groovin”, my first CD was actually ‘Lessons In Love’. I produced my first two projects while I was pursuing my Law Degree and Masters of Business Administration at Georgetown University in Washington, DC. Before I graduated, I released another CD entitled ‘Inter Alia’, which is a Latin legal term which means “amongst other things.” This was a fitting title given to me by one of my close friends who was practicing law at the time. She was trying to figure out how I played music, produced, performed, played soccer (Georgetown intramural), and still had enough time to study and not get kicked out of school. You know, as I read all this back, I must have been a nut. Once I graduated, I decided to continue with my entrepreneurial aspirations and started Marimelj Entertainment Group, Inc. out of my mother and stepfather’s basement. This is where I met CARL GRIFFIN with N2K who decided to put the best of ‘Lessons in Love’ and ‘Inter Alia’ together to create ‘Chocolate City Groovin”. Once N2K was sold and the label shut down, I decided that God must want me to stick to the original plan and I began to produce the CD ‘Coming Back Around’. Kinda fitting, hey? It was like I was coming back around to my senses after seeing the insides of a record company and recognizing that the existing model would never work going into the future. At that time I made the commitment to myself to stay independent and do all that I could to assist other musicians in realizing their dreams.

Let’s now focus on your latest album – how did it come about and why the title ‘Poetically Justified’?

All of my life, everyone has always told me what I cannot do. I can’t do music, I can’t do law, I can’t do business, I can’t do them all at the same time, I can’t produce my own CDs, I’m too young to have a company, Why would you do jazz? Why dream? We all live with this type of discouragement. When it comes from your family, you have to know it’s out of love. When it comes from others, it’s generally from a perspective of hate or self hate. Regardless, when we dream, it is our responsibility to follow our dreams through to the end. Is it rough? Yes. Will you have failures and obstacles? Yes. But so did CHURCHILL, ROOSEVELT, CARNEGIE, BRANSON, and WINFREY. The key, as stated by author PAULO COELHO – in ‘the Alchemist’ – is to fall down seven times and get up eight. Then, you too can be poetically justified. The record and its title allow me to spread this good news around the world – I’m not any more special than you. If I can succeed, you can too. So…Do it!

How did you get Maysa to work on the project… what’s she like to work with?

She is a friend and lives about 50km up the road in Baltimore. She is incredible. We wrote the songs in the studio and ‘Master Of My Heart’ just happened. So awesome! We were actually working on the 3rd verse of the song and she started those scats using “La.” It was over. I told the engineer if he stopped the recording I would kill him. When the song ended and she said the last “La” with my piano scale, we all just sighed. She’s the best.

You cover the JACKSONS’ ‘This Place Hotel’ on the set … why? And how poignant now MICHAEL’S been taken from us…

My feeling is that if you pick a cover, you want one that is just right. Not the one that everyone does and not the one that no one knows. You have to do one that’s just right. The groove on this is undeniable. Also the chord progressions allow you to have a lot of fun. And you see we took some liberty to add a little on the end, because, after all, it’s about playing your heart out for your supporters. As for him being taken from us, what a heartbreaking story and life. It’s probably too much to go into here but I don’t think that people really understand what it’s like to live a life like his. I wouldn’t want it. Not like that. When you hear about his will, it’s pretty obvious that he felt that he could only trust two people, his mom and Diana Ross. Can you imagine that? All of the people that he has helped and he only trusted two of them?

And Marcus Johnson … where does he go from here?

I want to keep on growing! I read all of the time. I wish I could practice more, but I will get the chance soon enough. I work out 4-5 days a week and try to take care of my body. I can guarantee you that we will put out more and more music in more places. Marcus Johnson, Flo Brands, and Three Keys Music are here to stay. Our hope is to create the new classics that will be enjoyed by many for years to come.