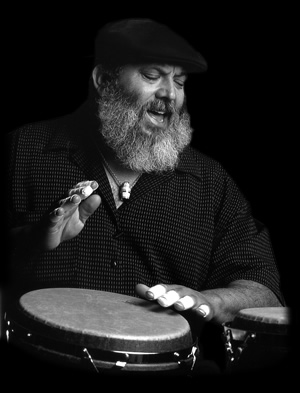 “Cal Tjader was the greatest guy in the world,” remembers conga maestro Poncho Sanchez as his voice conveys a sense of deep affection and respect that’s almost palpable. “He was a sweetheart of a guy and he could play so pretty, man. Nobody plays vibes like Cal Tjader.”

Sanchez has good reason to hold Tjader in high esteem – the genial, bespectacled vibraphone maven, who was a key figure in developing Latin jazz in the ’50s, ’60s and ’70s, gave percussionist, Sanchez, his first big break. That was back in 1975. Then just 24-years-old, Sanchez – whose specialty is playing the congas – joined Cal Tjader’s band as a greenhorn and spent seven years touring and recording with the vibraphonist. It all came to an abrupt end when Tjader died suddenly of a heart attack on a tour of Manila in the Philippines in May 1982. He was just 56. But as a result of Tjader’s mentorship and the experience he’d accrued in the recording studio and on the road, Sanchez formed his own band and has been successfully flying the flag for Latin jazz ever since. He won a Grammy in 1999 for his acclaimed album, ‘Latin Soul,’ and today in 2011 – having just notched up his 60th birthday on October 30th – he’s just released a brand new album, ‘Chano Y Dizzy,’ which explores the roots of Latin jazz. The affable conguero recently talked to SJF’s Charles Waring about his new project and also reminisced about his friendship with Dizzy Gillespie and recalled his formative years as an aspiring conga player…

What’s the story behind your new album?

A couple of years ago, my manager, Ivory Daniel, said “listen man, maybe you should do a tribute to Dizzy Gillespie and Chano Pozo.” He knows I’m a big fan of all that: I’m a historian, I’m a collector and I have a collection of records and videos and DVDs and CDs. I have a whole room dedicated to them. So I said “yeah, that sounds great.” I’ve recorded a lot of their music in the past but I’ve never paid a special tribute to Dizzy Gillespie and Chano Pozo. So I thought it was the perfect time and we started investigating a few tunes and getting our ideas and our thoughts together and so basically it’s a tribute to Chano Pozo and Dizzy Gillespie. We also threw some of our own ideas and different tunes in there.

How much of an influence was Chano Pozo on you and your approach to percussion?

He’s like the grandfather of all conga drummers in America because he was the first conga drummer that came from Cuba to New York City in the early 1940s. Latin jazz was born in the early ’40s when Dizzy Gillespie met Chano Pozo in New York City. When I was a young boy my brothers and sisters used to listen to the music of Dizzy Gillespie and Chano Pozo and of course later on Machito, Tito Rodriquez, Tito Puente, and Cal Tjader and all that stuff. I heard some of those old recordings and even as a youngster I could tell that those recordings were experimental because Dizzy had never played Latin music before and Chano had never played jazz before and you can tell on some of those early recordings, like ‘Manteca,’ which is a tune they wrote together, it’s half swing and half mambo. They were still trying to create that and still trying to put those two things together. On those first early recordings they were really breaking a lot of ground at the time and now I know that even more; the more I hear the records the more I learn and realise that were actually breaking new ground and new territory at that time.

On your album you cover ‘Manteca,’ ‘Guachi Guaro’ and ‘Tin Tin Deo,’ which are considered Latin jazz evergreens.  Why do you think they are so popular still?

Of course, I don’t really have an answer for that but for me, I’ve always liked those tunes: I just love the melodies and harmonies they used. I just think great ideas and good music lasts forever.

Dizzy Gillespie you mentioned. What do you think his contribution to Latin jazz was?

The fact that he was willing to try something totally different from what anybody else was doing at the time. First of all, Dizzy Gillespie and Chano Pozo are the great pioneers of Latin jazz: they are the grandfathers of this music and they’re the ones that I give credit to for trying something different at that time. Dizzy was a great bebop jazz trumpet player and he could get all around his horn. He knew his horn inside out. He could play some great lines and I had the honour and pleasure of playing with Dizzy’s band – and Dizzy also played with my band as a special guest several times. So I’ve had the honour and pleasure of working with Dizzy and knew him very well. I think he was just a great person and a very special person to be able to have that kind of mind and that kind of thought, to step out of the box and say “hey, let’s try something totally different.” Chano and Dizzy did and that’s why I give them big credit for it. Dizzy was also a great songwriter, arranger and he had a great big band – and he was a great soloist and a great performer.

Oh he was great, man, he was funny. He was very witty and sometimes he had a dry sense of humour. Sometimes if you’d catch him in the wrong mood he was kind of short and sweet about whatever you were talking to him about. I met Dizzy towards the last eighteen years of his life or so I can only imagine what he was like in his twenties. He was a really funny guy and a nice guy. To me he was very good. About 27 years ago, I remember I went to Sardinia with my band to play at a big jazz festival. I was really nervous about it because it was my first big trip with my own band and Dizzy Gillespie was going to play with us. I was having a hard time and beginning to doubt myself as a musician and band leader. We actually got out on stage and Dizzy pulled me aside. He looked at me right in the face. I thought wow, what’s going to happen? He said “Poncho, I want to talk to you, man.” I thought whoa, Dizzy Gillespie wants to talk to me. He looked straight into my eyes and said “Poncho, man, what is all this noise about you don’t know if you can make it in this business and this world? You belong here; you belong right where you’re at, right now this moment, right now this time. You belong here. You’re doing the right thing, and you’ve got a great band, ‘cos I wouldn’t be playing with you if you didn’t have a great band.” I thought he was a mind reader and it scared me for a minute. I thought: how does he know that? But later on one of the guys in the band told me, your manager, Frank Maloney, was talking to Dizzy earlier and I think he was talking to him about you. So Dizzy was a straight up kind of guy.

You’ve got Terence Blanchard, another talented trumpeter, playing with you on your new album. What was it like playing with him?

He’s a good friend of mine, Terence. We’ve been doing this Chano Pozo/Dizzy Gillespie package now for a couple of months. We’ve been travelling around the United States. We’ve played a handful of times with Terence already. We also just got home. We were in Hong Kong, China and Seoul, Korea, three weeks ago: we did some festivals out there. Terence also went with us out there. He’s a great guy, man, he’s a good brother and he can really play. He can play great trumpet and he’s a great writer/arranger: we all know he’s a great (film) composer and I know his music very, very well. He’s learning about Latin jazz very quickly. He’s learning the claves and learning to feel the rhythms, the mambos, the cha-cha-chas and the grooves, ‘cos it’s kind of a little bit new to him because he’s a hot bebop trumpet player. But he loves it.  He’s a very exciting player – and now he’s a very good friend of mine. Every time we play afterwards we hang out together and have a good time so the thing with Terence Blanchard has been working out great.