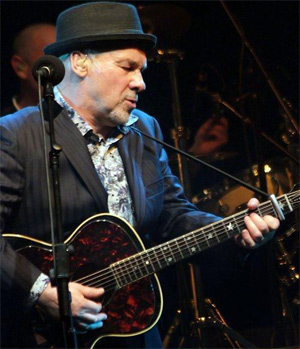 PAUL CARRACK is the UK’s favourite blue-eyed soulster. The Sheffield-born troubadour’s regular tours (his latest kicks off very soon) are must-see affairs and his albums sell by the boat load without the hype and ballyhoo that other (lesser) performers indulge in to move their music. His latest, just-released long player – ‘Good Feeling’ – is set to repeat that formula… so with an album and tour good to go, what better time for SJF to team up with PAUL to find out more about that tour, the new album and lots of other stuff – including his Sheffield musical roots

Yes I’m from Sheffield….. part of a large, extended working class family. A lot of my uncles, cousins etc worked in the heavy industry that was thriving in Sheffield at the time but my dad was a self-employed painter and decorator and my Mum ran our little wallpaper shop which we lived at the back of in one room. I learned from my folks the value of hard work, honesty and treating people with respect. Musically, there were loads of bands playing in the pubs and clubs, especially with the onset of the Mersey boom. I saw JOE COCKER play many times in little pubs and he was special. In my teens I sold my drums and bought an organ and started to teach myself in order to join my mate who was the singer in a local soul band. Soul was the music of the times and the king of the scene was GENO WASHINGTON AND THE RAM JAM BAND whose ‘LIVE’ album we played more or less verbatim. This was the most influential period for me musically. Although I wasn’t singing at this point, I loved all the greats, particularly DAVID RUFFIN, STEVIE WONDER, MARVIN GAYE, SMOKEY ROBINSON and hundreds of others.

One of your first bands was WARM DUST – which morphed into ACE who scored with the massive hit ‘How Long’ in 1975. That song’s now a pop music institution – how did it come about and what do you honestly think of it… I mean do you ever get fed up of it?

I wrote ‘How Long’ about another band, who were our mates, trying to poach our bass player TEX COMER. It’s a simple song with a strong hook. We all got excited thinking it might be a hit but didn’t imagine it would be around 40 years later. I still enjoy singing it (in the original key) because I can always find something new in the phrasing and it’s just in the sweet spot of my voice.

It was. ACE were the polar opposite of ROXY. ACE were scruffy, sloppy ex hippies who didn’t buy the glam rock thing. However, when we returned to the UK from USA after our one big hit, the punk thing was taking off and I thought my career was over so I was happy to keep my head down and get whatever session work was going. Through other musos in a similar situation like ALAN SPENNER and NEIL HUBBARD I was rowed in to work with ROXY. We (the session guys) were a bit bolshie but to be honest, it was good fun and BRIAN (FERRY) was a good laugh. He was a huge star in Europe and going on tour with ROXY was an eye opener and I really enjoyed it.

Later you worked with all kinds of people – SQUEEZE, NICK LOWE, DAVE EDMUNDS ,CARLENE CARTER, JOHN HIATT, THE PRETENDERS, MIKE RUTHERFORD (MIKE AND THE MECHANICS) even the SMITHS – just to name a few … what do you remember of those days?

Sure did…. all and more, but I would need to write a book to go into all that. In the case of SQUEEZE, NICK (LOWE) and MIKE (RUTHERFORD), I had fairly long committed relationships but in the case of THE SMITHS, PRETENDERS etc my contribution was minimal… a track or two here and there.

In between all that, though, you were trying to kick start a solo career – how did you resolve – even cope with – the two different roles?

I don’t really know. What a bizarre career. I also was bringing up, along with my amazing wife, four great kids.

When was it, would you say, when you were finally accepted – even saw yourself – as a solo performer? Indeed do you see yourself primarily as a solo artist – since you still tour with other bands and still take on lots of session work?

I’ve worked hard with the help of my band and support to establish myself as a solo entity and I’m enjoying being my own boss. I rarely tour with anyone else now as there just isn’t time to do everything. However, ERIC CLAPTON has asked me to join his band for a tour when my own tour ends in March 2013. I couldn’t turn that down…. could I?

As a solo performer you’ve built a steady and loyal fan base – despite a comparatively low profile – how do you explain that.

It’s been done by hard work, constant touring and delivering value for money which people appreciate.

And how would you categorize your solo work in terms of style or even genre?

Now the new album – why the title ‘Good Feeling’?

‘Good Feeling About It’ was one of the first songs written for the album. As a single it received good airplay and it made sense to make the connection to the album. After the diversion of my previous album ‘A Different Hat’ recorded with the Royal Philharmonic Orchestra, getting back to my normal mode felt fresh and upbeat

How did you actually put it all together?

I recorded it at home and played most of the instruments except drums (my son JACK played drums) and sax, STEVE BEIGHTON.

One of the key songs on the set is ‘I Can Hear Ray’… what’s that all about… it’s obvious you have a passion for RAY CHARLES?

Always loved RAY since my elder brother brought home ‘Ingredients In A Recipe For Soul’. But the song is about a guy coming home from the road hearing RAY coming down the stairwell and knowing he’s almost home.

Another great moment is your cover of the DRIFTERS’ ‘When My Little Girl Is Smiling’ – why did you go with that one?

I’ve loved the song since I heard it by a Liverpool singer, JIMMY JUSTICE, who I saw open up for THE BEATLES back in the 60’s

You also cover tunes by BRUCE SPRINGSTEEN, old pal NICK LOWE and jazzer THAD JONES – does that offer us any clues to your own current musical tastes?

Not really. The SPRINGSTEEN song was suggested by a friend (I’m not that familiar with the Boss’s work). I recorded the NICK song 30 years ago but it feels right now with a bit more life experience.

I hope people feel that I am getting there.

And presumably you’ll be featuring songs from the set on your upcoming tour –what else can we expect?

Songs from my whole career. Some of the big hits I’ve been associated with. ‘How Long’, ‘Living Years’, ‘Over My Shoulder’… but a fair smattering from the new album as well. I try to get the right balance of familiar songs and new material.

Finally in a long and very distinguished musical career – what would you consider you finest moment and greatest achievement?

Surviving for over 40 years

PAUL CARRACK’S ‘Good Feeling’ is out now and reviewed in our ‘Reviews’ section. Find out more about PAUL’S music and his upcoming tour @ www.paulcarrack.net

Also on October 12 at 9pm, BBC 4 will be screening a documentary about PAUL – ‘Man With The Golden Voice’