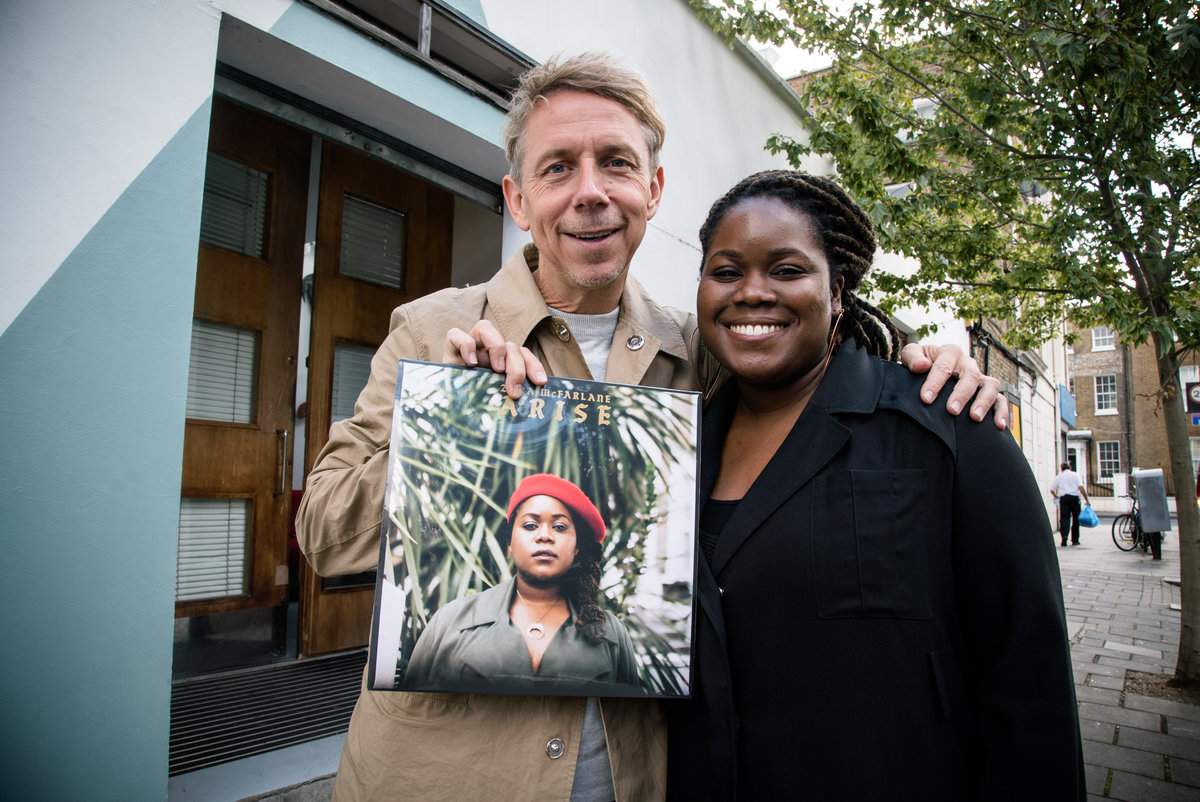 “He’s interesting to be around because knows so many records –  he’s like an encyclopaedia.” So says Zara McFarlane, who is talking about her boss at Brownswood Records,  world-renowned DJ, broadcaster,  and tastemaker, Gilles Peterson. The Dagenham-raised singer – who won a MOBO award three years ago in the category of ‘Best Jazz Act’ – has been with Brownswood since 2011 and is just about to release ‘Arise,’ her third album for the label. She describes Peterson as an inspirational presence at the record company. “He’s an ideas man 100%,” she declares.  “He’s been helpful for me with all of my albums. He likes to sit down and ask you what’s going on with your life and when’s the record coming out.  But musically, he offers inspiration through records and will say, ‘I think this record will be perfect for you to listen to for inspiration,’ and it’s been really helpful. He won’t automatically reference something obvious but he can hear something that might influence me in a different way, which always works and I find inspiring. So that’s pretty cool.”

Zara says it was Peterson’s idea for her to meld jazz with reggae, which is a musical fusion that defines the singular sound and style of ‘Arise,’ a 12-track album that finds the singer-songwriter delving into her Jamaican ancestry. “Exploring jazz and my heritage in Jamaican music is something that I’ve always been very interested,” says the singer who studied at the London College of Music. “With the last album, I had a cover of (Junior Murvin’s) ‘Police And Thieves’ and on the new record I wanted to explore Jamaican music even more. I’ve always been interested in my Caribbean heritage, though Jamaican history is not something that I’ve known a huge amount about, especially as I grew up in Dagenham.”

The singer had a chance to visit Jamaica recently, which further fuelled her interest in the island’s history and culture. “I went there in June for a week to do some research for a musical I’m writing based on a Caribbean folk story,” she reveals. “It’s the folk music of the 1830s-era just before the emancipation period in Jamaica that really interested me, though I was also listening to ‘kumina,’ an early folk music of Jamaica from the late 1800s, after the emancipation of slavery, and the influence of Liberian drumming, and also the Rastafarian element.”

All these elements are infused with jazz and reggae on ‘Arise,’ which is an album dominated by percussive rhythms and opulent vocal  harmonies. “A lot of it started off with the rhythm – different aspects of it – and I knew I wanted it to have more rhythm and percussion elements, and be more danceable –  because when I perform on stage I like dancing,” she laughs. “My last album (2014’s ‘If You Knew Her’) had a lot of ballads, which honestly I love, but I wanted to implement a different side. I also put a lot of more intricate harmonies on this album compared with the last one and wanted to develop that further.”

The end result is an alluring, multi-hued, eclectic melange of flavours that defies easy categorisation. The album’s bookended by two, bubbling, percussion-laden pieces with vocal chants called ‘Ode To Kumina’ and ‘Ode To Cyril,’ which set the ambient tone for the album. In between is sandwiched music as varied as reggae (exemplified by the infectious, Lover’s Rock-steeped ‘Fussin’ And Fightin”); cutting -edge modal jazz (‘Pride’); sizzling Latin-esque fusion (‘Stoke The Fire’); and pensive ballads (the lovely ‘Silhouette’). The latter track features noted UK reed man, Shabaka Hutchings. “I’ve known him for a long time, from Tomorrow’s Warriors,” explains McFarlane. “He’s a friend and a great person to work with. He came straight to the studio after flying back from touring and put down the track. I was really happy to get him because he was extremely busy in that period of time.”

The album’s producer is Moses Boyd, a noted drummer who is one half of the award-winning jazz duo, Binker & Moses. “I’ve been working with him for the last three years,” says Zara.  “He performed on ‘Move’ from my last album, and pretty much did the whole tour for the next couple of years after that. So we’ve been working together quite closely in the band. We get along really well and he’s also of Caribbean descent. Being a drummer and rhythmically focused, he understood a lot of the things that I was exploring. It just worked out quite naturally and then he’s really cool to work with because again he has lots of ideas but also he knows a lot of different records and is very interested in music in general. We always bounce off each other quite well because we’re both really interested in rhythm, so it was a very organic process.”

Though mostly containing self-written material, ‘Arise’ also contains a notable cover – a richly-harmonised version of reggae singer Norah Dean’s 1971 track, ‘Peace Begins Within.’ “We actually did two versions,” discloses Zara. “We did one like the original one as well as the one that’s on the record. I have a thing about doing different versions of things. It’s quite natural for me to do something that might be similar or one way and then do another take on it. But the record company and people really took to our version of it, which was good.”

Though she’s considered a jazz singer and won a MOBO award for her work in that field, this new album with its array of musical flavours, might come as a surprise to some listeners. I asked Zara how she both perceived and defined herself as a singer. “That’s an interesting question,” she laughs. “I studied popular music performance for my undergrad and there was a jazz module on that, but it wasn’t actually a jazz degree. But I got into jazz by working with jazz musicians. My parents didn’t listen to jazz but I heard a lot of reggae in our home. I don’t hate being called a jazz singer, and I think I probably put myself in that bracket for a long time, but as things are evolving, my influences are definitely just wider than jazz music in that regard. I would like to consider myself exploring what my sound and style is and I get bored very quickly and enjoy challenging myself in different situations. And in terms of my songwriting, it would be nice to be considered a singer-songwriter perhaps, as opposed to just doing a particular style of music.”

Though Jamaican music has played a central role in the soundtrack to her life so far – “like reggae, rock steady, and a little bit of Ska, but not so much dub,” she says – Zara also listened intently to soul music, which also had a huge impact on her. “I listened to a lot of Michael Jackson, as many people have done in their life,” she states. “Also, growing up, I listened to Luther Vandross a lot, and soul music, and then singers like Whitney (Houston) and Mariah (Carey), but not as much as people might assume, me being a singer. But I did enjoy that kind of music because it was ballads and a different way of singing compared to reggae music.”

Focusing on individuals that have influenced her songwriting, she cites reggae icon, Bob Marley, in particular.  “I didn’t remember listening to Bob a lot as a child but I definitely connected to his music quite deeply and lyrically,” she says.  “I find his lyrics amazing; they’re like parables, and he’s definitely influenced my songwriting, whether consciously or subconsciously.” Nina Simone, too, is high on Zara’s list of those that have inspired her. “I really love Nina Simone, she’s someone I listen to a lot,” she enthuses. “I really fell in love her songwriting – even though she didn’t have much of a repertoire of her own songs – but one or two things were more political. They were actually quite simple songs but very meaningful. Even though she was classically trained, she actually wrote quite simple, blues-inspired songs.”

Reflecting on her career thus far, the 33-year-old says that she is glad that she signed with Brownswood rather than a bigger label as they allow her to create music on her own terms without compromising her creativity. “I really enjoy the fact that I have a lot of creative freedom and are able to express myself musically to the way that I want to,” she states. “My songwriting has been something that always has been quite personal for me and I’m not necessarily coming from a commercial angle for it. I think if I was pushed to be commercial previously, it wouldn’t have been very successful.”

Looking to the future beyond ‘Arise,’ Zara declares that she has a raft of unfulfilled musical ambitions. “I would love to do something with an orchestra,” she reveals. “And I would love to explore some more electronica elements with my voice. I’m also really interested in mixing. I work quite closely with the person who mixes my albums, so the idea of using loops and all these things that you can do vocally these days I’m interested in. But the biggest one for me is the orchestra thing. I like challenging myself so I’m not averse to working in many different styles. I’d like to work with many different artists in all sorts of different styles, like reggae, jazz, soul, gospel and even rock.”

But for now, ‘Arise’ is understandably her main focus. “I’m really proud of it,” she beams. “I think out of all my records so far it’s the most accessible. It’s a really good example of what I’m trying to do, fusing jazz and reggae. I hope that it connects with people and they like it.”