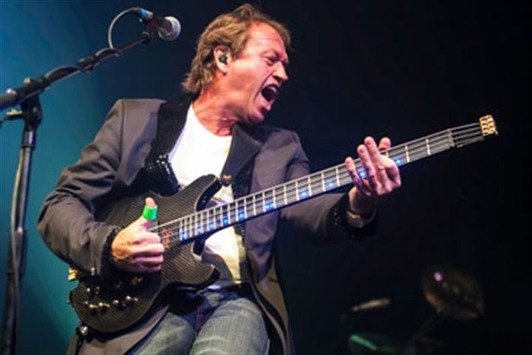 Are Level 42 a jazz-funk band with a pop sensibility or a pop group with a funk-infused inner core? A good question, perhaps, but it’s a hard one to answer and though they’ve never been easy to pigeonhole, one thing’s for sure; back in the day, the quartet from the Isle of Wight knew how to make records that would appeal to the wider public without sacrificing their musical integrity. Though they were part of the nascent Brit Funk movement in the early ’80s, they quickly demonstrated that their musical vocabulary extended beyond the somewhat constricting parameters of jazz-funk.

Between 1980 and 1994, Level 42 were virtually omnipresent in the UK singles chart. They notched up a very impressive 29 chart entries in a fertile fourteen-year spell that yielded the Top 10 hits ‘The Sun Goes Down (Livin’ It Up),’ ‘Something About You,’ ‘Lessons In Love’ (which was the nearest they got to a UK chart-topper, peaking at No. 3 in 1986), ‘Running In The Family,’ ‘To Be With You Again,’ and ‘It’s Over.’ All those key tracks can be found on an excellent new 4-CD box set retrospective on Universal called ‘Living It Up.’ Not only does it include all the band’s singles – beginning with a funky instrumental called ‘Sandstorm’ that lit up clubs back in 1980 – but also includes a raft of previously unheard studio rarities (including demos) and a brand new acoustic album where surviving original members bassist/vocalist Mark King and keyboard player Mike Lindup, reconfigure some of the band’s classic songs in an unplugged setting.

The release of ‘Living It Up’ coincides with Level 42’s thirtieth anniversary as well as a global tour, which started in May and ends in November (the band play a couple of UK dates in August as a warm-up for a lengthy tour of the British Isles later in October). Renowned for his astonishing skill on the bass guitar and currently gigging in the USA with the band, Mark King found time to talk to SJF’s Charles Waring about the group and its music.

The band began at the end of 1979/early 1980 and was a case of four mates getting together on a Monday night to jam and hang out together. We used to use a room at The Guildhall School of Music where (keyboardist) Mike Lindup was a student and where he had met (drummer) Phil Gould, who was studying at the Royal Academy of Music. I had known Phil and his brother (guitarist) Boon from playing in bands together on the Isle of Wight, but we had moved to London to seek our fame and fortune around the same time, so meeting up again seemed the thing to do. The name came about because we wanted something that would differentiate us from the punk bands that were around and they all had these very aggressive sounding names that screamed PUNK!, so we chose a number, and the number 42 was featured in Douglas Adams’ ‘The Hitchhiker’s Guide To The Galaxy’ that both Boon and I had been reading at the time.

Mark, you started off as a drummer – how and why did you switch your attention to the bass?

That was the role that seemed to suit me best I suppose. Phil was a great drummer and, more importantly had a drum kit, so Boon and I used to swap from guitar to bass depending on what ever tunes we were playing. It was our first producer Andy Sojka who chose the riff that would become ‘Love Meeting Love’, our first single, and I happened to play bass on that track so it kind of stuck with me.

In musical terms, what was it like growing up on the Isle of Wight? Did you have an opportunity to see many live acts there?

The island was a very good place for an aspiring young player to grow up – loads of live music venues with all the pubs, bars, and holiday camps, and lots of local bands all vying for the gigs. We didn’t get too many ‘big’ bands over, but the kudos of the three massive festivals in ’68, ’69, and ’70 gave us all a feeling that it was a good place to be.

How did the band get involved with the Brit-Funk movement?

Quite by chance. The Brit Funk thing was starting to build up a head of steam with the soul weekenders and because we had now signed to Polydor Records and had a couple of singles under our belt we were pushed out onto the promo circuit along with guys like Light of the World, Incognito, Lynx, Shakatak to name but a few, and it all came with a readymade audience.

What influences helped to shape the band’s sound?

Our big influences seemed to come from across the pond and ranged from Stevie Wonder to Miles Davis and all the amazing fusion players that he brought to light. John McLaughlin, Chick Corea, Billy Cobham, Tony Williams, Herbie Hancock, Keith Jarrett et al, and James Brown, of course, mixed with the influences we had been exposed to here through the ’60s and ’70s, so The Stones, The Beatles, Cream. It was a fantastically rich period for electric bands and we were lucky enough to have been around to suck it all in.

Can you remember what was the defining moment in the band’s career, when you’d realised you’d made the big time?

Sitting at a bar sipping an ice-cold beer with Boon in Viareggio, Italy, just off of the beach which was strewn with topless babes when our tour manager Roger came in and said, “‘Lessons In Love’ has just gone to number one in Germany.” That was quite a moment.

How did the death of guitarist Alan Murphy in 1989 affect the band?

It was dreadful, of course. Al was such a great guy, fantastic fun to be around and a really great guitarist, so how could he not be missed? I have wonderful memories of a week we all spent together in New Orleans shooting two videos for the ‘Staring At The Sun’ album in 1988. It was a real blow when he passed away in ’89 and I think some of the sparkle went out of the whole thing for me then.

What feelings and thoughts came to you when listening to the tracks on the career-spanning box set?

I’m rather proud of it all actually. I think Julian (Fernandez) at Universal has done a great job, not just for the fans but for us too, and the thing is it’s there forever: we made it all and there it is!

Did adapting your material for the acoustic album present any difficulties, and if so, what were they?

The acoustic album came about as a response to radio station requests to “come in and play something live, unplugged of course!” which wasn’t something I’d ever envisaged for Level 42, but we all need the promo so I gave it a shot. The first song we played acoustically was ‘All I Need’ from the 2006 ‘Retroglide’ album because it seemed to lend itself to an acoustic treatment without any significant re-arranging. Then I had an urge to re-do ‘Lessons In Love’ with a different take, which led to Mike and I sitting in the studio knocking ideas around until there was an album’s worth. I enjoyed the exercise and would like to do more in the future – Lord knows we have enough songs to choose from.

Level 42’s ‘Living It Up’ is out now on Universal. For more information on the band’s tour dates go to http://www.level42.com/