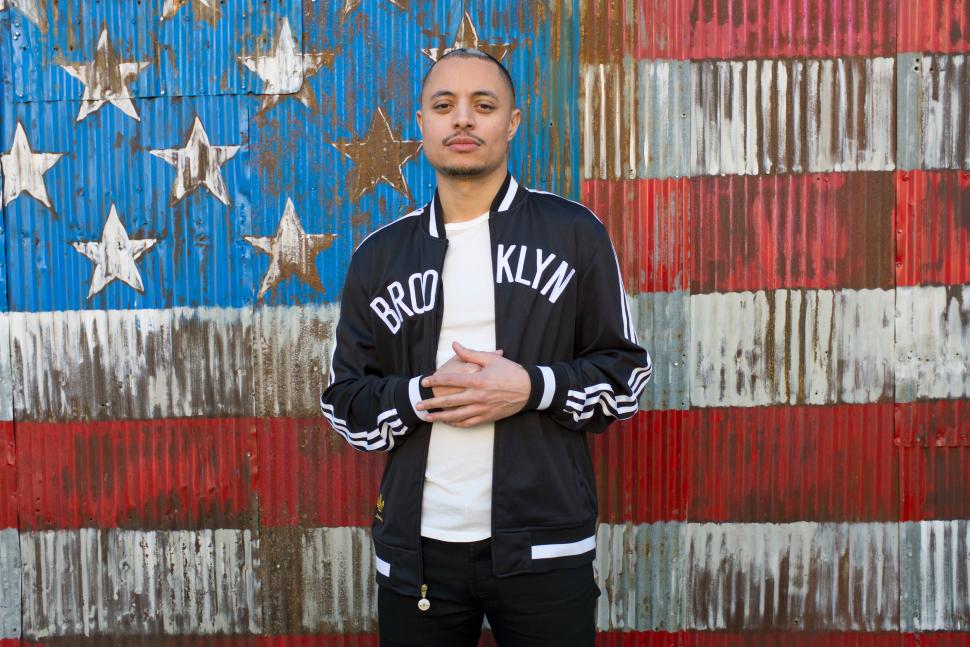 Brian Bender co-produced album with you. What does he brings sonically to the table?

Well, Bender’s the one who can make it all make sense. I’m the one coming up with the ideas; I want a little bit of this or little bit of that and Stereolab and he says okay. He’s the one that makes it sound cohesive, so it’s not all over the place because we took a lot of risks and went to a lot of places sonically and frankly I pushed band to go to places that I didn’t know they were prepared to go to, which is good. And they pushed me to those places too, so it’s good to have one person who is not in the band and who didn’t write the songs and who emotionally isn’t tied into the stuff and who can say: you know what? Let’s do another take or “that was perfect” because there’s a lot of heated discussion and a lot of fights in the studio and we were freaking out.

Japanese trumpeter and your label mate Takuya Kuroda plays on your Al Green cover, ‘Simply Beautiful.’ What was the experience of working with him like?

He’s just a joy. He’s super-spontaneous and soulful and a great guy to be around. He makes you really happy so he was just a total pleasure, man.

What made you choose that particular Al Green song?

I just love it. It’s a song that’s stayed with me since the first time that I heard it and we started performing it live and it was so good that we said let’s do a studio version of it. You know it really has to be good if you’re going to cover Al Green or any of those greats: Marvin Gaye or Aretha. It has to mean something. And I think it really does.

In terms of your musical influences, which musicians over the years have helped to shape your own musical style?

Miles Davis for sure. Billie Holiday, John Coltrane, Marvin Gaye. I think those are the main people and then from hip-hop, A Tribe Called Quest, The Beastie Boys, people like that. And definitely (Seattle grunge rockers led by Kurt Cobain) Nirvana too. That was a big influence on this album.

What drew you to jazz in the first place?

It was really hip-hop samples. I was really into A Tribe Called Quest, De La Soul, and Ice Cube, and pretty much everything I listened to had some kind of a jazz sample in there or a soul sample. I started checking out the samples, like A Tribe Called Quest sampled Roy Ayers’ ‘We Live in Brooklyn,’ so I found the original album and then when I discovered there was this vast unending catalogue of jazz and soul stuff I just got super-hooked. It was like this world that I had stumbled upon that no one had ever told me about.

As well as your own new album you also have a cameo appearance on the new album, ‘Free Spirits’ by Italian guitarist Nicola Conte, singing on the track ‘Goddess of the Sea’…

It’s funny: everyone keeps telling me about it but I haven’t heard it. I think it was something that we must have done in the studio that I totally forgot about (laughs). It might have been something that we had recorded before. I’ve been to Bari three different times. I did the same thing with Jazzanova: just record a whole bunch of stuff while the iron is hot. We’ve done a lot of stuff together. He’s a great producer, super-musical, very knowledgeable, and he really has such an interesting, specific sound.

Previously you worked with the legendary jazz pianist, Junior Mance. How did you meet him and what was the experience of working with him like?

He is just a super-legend, man. God, I could talk about Junior forever. He’s from the Midwest, originally from Chicago, so we have that in common. The thing about Junior is that he’s worked with pretty much every great jazz singer and musician who’s ever lived. He’s worked with Joe Williams, Johnny Hartman, Dinah Washington and Carmen McRae and so just the stories (he tells) and that kind of accompanist doesn’t really exist any more. It was absolutely great to work with him.

Given that Junior has worked with some of the greatest vocalists in jazz history, did it make you feel that you were part of the music’s tradition and vocal lineage?

Oh, absolutely. To be able to work with those guys, him and Chico Hamilton, and to be able to meet Benny Golson and have him hear my stuff, and say “hey, that’s really great, you really have something” really makes me feel special. Those guys created the music literally so coming from them that means more than anybody.

You worked with Chico on his ’12 Tones Of Love’ album didn’t you?

I was so nervous. Chico started the New School actually. A lot of people don’t know that he was one of the two founders of the New School Of Music and Junior (Mance) was the first person he hired as a teacher. In true jazz fashion, the other guy, Arnie, who started the school, went to a bar and saw Chico and said hey, we’re starting a school will you be our first teacher? (Laughs). They were innocent times back then, like 30 years ago. Chico was still teaching at school – he was teaching basic rhythm, if you can believe that – when I went there. When you’re in the university you get to test out a lot of stuff if you are in dance or something. Singers don’t really have as much musical training as saxophonists and instrumentalists so we all took basic rhythm and it turned out to be the best class ever because it was Chico Hamilton and he turned it into a vocal session and talked about the legendary people that he worked with; like Lena Horne, who he was with for six years or something. He was just a super-sweetheart and he remembered me from the class when he was making a bunch of albums. He called me and said hey, here’s the beat of the song, this is the place in time and that’s it. He was real old school. He didn’t tell me the key or anything specific. So you really have to prepare so I spent a week preparing for every possible key and it was great because when I came to the rehearsal I knew I was ready. He was super-sweet but those guys don’t really mess around. They mean what they say and they do things in one take and that’s it. There’s like a seriousness about them in the studio that definitely doesn’t exist in my generation. There’s not a lot of playing around…

A straight down to business kind of attitude?

Yeah, but it’s relaxed: it’s like we’re here to make music and we’re not here to waste the label’s money on hanging out and getting high.

Has that rubbed off on you, then, when you go in the studio?

Oh, totally. I’m super-decisive, especially working with younger artists like Kris Bowers and even (guitarist) Brad. I think there’s something about instruments that you can play all day and not get tired. They always want to do another take and try a different way but for me it’s different. I’ve grown into the role of a producer, not only creatively, but also financially as an executive producer so I’m the one watching the clock: okay, cut, move on! (Laughs).