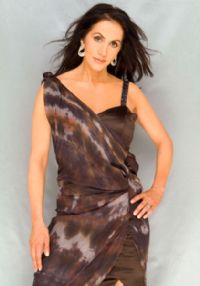 NORMAN CONNORS’ ‘Star Power’ album is one of the first big indie soul releases of 2009 and one track in particular is proving that real soul music is still alive and well. The cut in question is ‘Where Do We Go From Here’ – a shimmering duet between HOWARD HEWETT and the song’s writer, ANTOINETTE MANGANAS. CONNORS was so impressed with ANTOINETTE’S performance that he recorded her on two other key tracks – covers of ‘Walk On By’ and ‘Sweetest Taboo’. Now residing in Pittsburgh, Ms MANGANAS also has her own album out. Called ‘Verbal Crush’, the 12 tracker is a relaxing mix of modern soul and smooth jazz with that man CONNORS taking production responsibilities on three of the selections. The album’s so impressive www.soulandjazzandfunk.com tracked ANTOINETTE down to find out more about her album and aspirations. We began by asking about her musical background…..

I wanted to be a singer since I was a child. I came from a musical background. My father, Reolando Nunzio Conte was a singer and played every instrument from the clarinet, to sax, to guitar and banjo. My mother would accompany him as a vocalist. They were also very “old school”, being that my father was born in Belmont, Calabria, Italy and my mom in Buenos Aires, Argentina. They had many plans for me but singing and being a performer was not one of them. They had that “old school” mentality where you get married and raise your children and the man provided. That being said, it never hindered who I was or my love for music and performing. In my home we had all kinds of sounds going on from all different rooms. My father was a barber (at home) and he listened to Gladys Knight, Dean Martin, Sammy Davis Jr., Carlo Butti, Lena Horne, Elvis, Tammy Wynette, George Jones, and Rod Stewart. My brother listened to the Beatles, The Rolling Stones, Hall and Oates. My sister listened to Chicago, Anne Murray, Donna Summer, Peter Frampton and I listened to Chaka Khan, Frankie Beverley and Maze, Earth Wind and Fire, Shalamar, Michael Henderson, Nancy Wilson, Michael Jackson and Sade.

How did you get involved in the Norman Connors ‘Star Power’ project?

I met some people that came to see me perform here in Pittsburgh. They contacted these friends of theirs from Atlanta where I was later on introduced to Norman. That is how I came to meet him, Bobby Lyle, Herman Jackson, Donald Tavie, Johnny Britt and Howard Hewett…and the rest was “Magic”!

Why did Norman choose your song ‘Where Do We Go From Here’?

As soon as Norman heard my song, he LOVED it from the start! Then, he asked Howard Hewett to sing the male part ‘cos he knew that Howard and I would make a great mix! He said that our vocals complimented each other’s.

I was first introduced to Howard at a restaurant in LA. We got along right from the start. He even ate my food! I don’t let anyone eat my food! I must have liked him! We had such a musical chemistry …and a personal one…I felt like I grew up with him and was reuniting with my high school buddy again! He is so cool! I am his soul sister and he’s my soul brother! I LOVED it because he knew exactly what to do on this song…..Very professional…..and he has a smile that is infectious!

Why do you think Norman choose you to take lead vocals on two other tracks…. Do you think he was having a ‘Phyllis Hyman moment’?

I truly believe in my heart that these tracks were “Special” to him and he was looking for the singer with a certain tone in her voice, a kind of sultriness and the right amount of soul to pull them off! At one point when we were in the studio, we were listening to ‘My Love Is All That’ (a song from ‘Verbal Crush’) while mixing it and I said “THIS SONG IS SO BEAUTIFUL”!!!!! Then I leant over and kissed him on the cheek…(my way of saying thank you for even letting me sing this song), and he had a tear coming down his cheek! I know that was his way of saying, “you’re welcome”…you made me proud! That made me teary eyed!

Tell us something about your own album ?

Well, my own CD is called ‘Verbal Crush’. I named it that because people would tell me that my voice was alluring and addictive. So, if you can’t see me to have a physical crush, then you can listen to me and have a Verbal Crush! I was fortunate enough to have Khari Parker, John Blessucci, and Larry Kohut as musicians on the album and producers like Larry King, Norman Connors and Donald Tavie from Lakeside. Bobby Lyle also plays on several of the tracks ….

Being a GEMINI, I LOVE A CHALLENGE…I’ve grown up with these songs and heard them sung by the most incredible and talented singers and I wanted to see if I could do them…and do them as well as they do…I guess that was my challenge. Plus, I never heard a woman’s version of one of my favourite songs ‘Sara Smile’ by Daryl Hall and John Oates and I wanted to do that..

What do you hope for the album and what are your immediate ambitions?

Simple …that the whole world will get to hear ‘Verbal Crush’! I know that people are hungry for old school music – music that tells a story or a ballad that can be delivered vocally for pure romance. Back in the day it was about romancing someone before you got the prize! Unfortunately today they seemed to have skipped that part. I am hoping the whole world will have a VERBAL CRUSH and appreciate the love and determination and dedication that went into both mine and Norman’s CD! Then I’m hoping to tour the world with my CD and hopefully they will fall in love with me like I have with my music!!!

…. And what about the future?

WRITE… WRITE … AND KEEP WRITING! I take things that I necessarily don’t know how to react to but it happens in my life so I put a song to it! Then I’m hoping one day that someone like Babyface comes to me and say, “I WROTE THE PERFECT SONG FOR YOU ANTOINETTE”….Would you please do me the honour of singing it?? MY DREAM … MY DREAM……Who knows????

ANTOINETTE’S ‘VERBAL CRUSH’ IS OUT NOW ON PYRAMID RECORDS AND IS AVAILABLE FROM THE USUAL INTERNET OUTLETS.