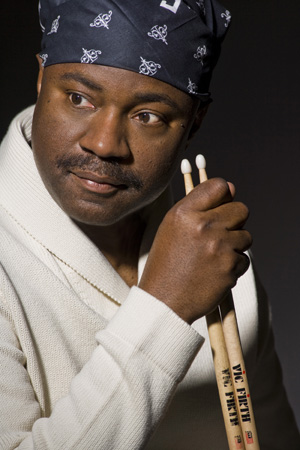 Having cut his teeth as a sideman with jazz saxophonist, Jackie McLean, in the late-’60s, native New Yorker and master drummer Lenny White made his recording debut on Miles Davis’s epochal jazz-rock fusion album, ‘Bitches Brew,’ in August 1969. He was just nineteen.

After making his mark with Miles, White played as a sideman with another jazz legend, tenor saxophone titan Joe Henderson, then played on Freddie Hubbard’s classic ‘Red Clay’ LP and after that joined a Latin jazz-rock group, Azteca, for a couple of albums. In 1972, he was asked by Chick Corea to join a new electric version of the band Return To Forever. Alongside keyboard wizard, Corea, virtuoso bassist Stanley Clarke and guitarist Bill Connors (who was replaced after one album by Al Di Meola), White and Return To Forever achieved massive popularity in the mid-’70s with an adventurous amalgam of jazz, classical music and nimble-fingered prog-rock. White enjoyed a parallel career as a solo artist alongside RTF and issued his own rock-infused brand of fusion on albums like ‘Venusian Summer’ (1975), ‘Big City’ (1977) and ‘The Adventures Of Astral Pirates’ (1978). Soul music fans are more likely to know White from his producer’s role for acts like Sylvia St. James, Pieces Of A Dream, Bernard Wright, Nicki Richards, Rachelle Ferrell and Tom Browne as well as his work in the ’80s alongside bassist Marcus Miller in the Jamaica Boys.

Equally at home in the spheres of jazz, soul and rock, White’s new album, ‘Anomaly’ – his first in a decade – reflects his versatility and musical eclecticism.

Recently in conversation with SJF’s Charles Waring, White not only talked at length about his new album but also reflected on key moments in a recording career that to date spans forty one years.