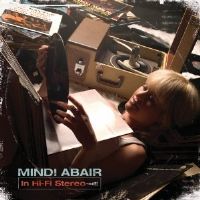 US sax star MINDI ABAIR releases her latest album – ‘In Hi Fi Stereo’ – in June. The Florida-raised, LA-based jazzer has used the album to re-visit the music that was such a big influence on her back in the day – specifically, the soul sounds and funk grooves of the 60s and 70s. Investigation reveals a feel good album with a big, happy vibe and though the 60s and 70s provide the launch pad for the album, the music it totally contemporary. Intrigued, www.soulandjazzandfunk.com wanted to know more, so we hooked up with MINDI on her recent visit to London and soon we were learning about her background and influences…..

“I grew up on the road with my father’s band, the Entertainers. They played a kind of blue-eyed soul. I grew up in Florida and I was really into music – everything from R&B to the Rolling Stones and even the Police! I played in the school band but didn’t really find out what jazz was till High School. At college I started to listen to Wayne Shorter, Cannonball Adderley, David Sanborn and Miles Davis. I ended up at Berklee College of Music in Boston where I took my degree but most of all I remember my sax teacher telling me to start my own band and never try to be someone else. I moved out to Los Angeles and spent nearly ten years doing all kinds of things. I played on the road with people like the Backstreet Boys, Bobby Lyle and Jonathan Butler and when times were hard I even busked on the street… down on 3rd. Street Promenade. I made my first album in 1999… It was a kind of pop vocal thing… from there my recordings became more instrumental and I eventually ended up signing with Verve, though now, of course, I’m signed to Heads Up… the label for the new album.”

“Yes… that’s right. The album is a reflection of some of the older more funky and soulful stuff that I’ve been listening to in the last couple of years – you know Al Green, Allen Toussaint, King Curtis – even Archie Bell and the Drells and of course great horn bands like Earth Wind and Fire, then there’s Ramsey Lewis. There are just so many great old records … I just wanted to play like that and create some magic… and have a good time.”

One of the album’s standouts is ‘All Star’ – there’s a great swinging Ramsey Lewis feel to it… what are your favourite cuts on the album?

“I love ‘All Star ‘ too. We were kinda trying to recapture a Motown vibe and make a really happy song. When we were recording it was so joyous that every time we reached the chorus I just kept throwing my hands up in the air…..It’s a real party thing. But like all the tunes on the album we weren’t trying to make an old record. We wanted new music with all those great old sensibilities.”

Another highspot on the album is your version of James Brown’s ‘It’s A Man’s World’… did you choose that one because – as a lady sax player – you found it difficult to win acceptance in what appears to a male dominated area?

“Well you could say that … it is definitely a man’s world but James Brown himself puts it really well in the song when he sings that it IS a man’s world – but it would be nothing without a woman or a girl. And anyway you know once people have heard you, once you’re in there, it makes no difference whether you’re man, woman, black or white if you can show that you have the talent you will be accepted…. and, hey, it’s such a great song anyway…”

…And how did you get Lalah Hathaway to do the vocals on it for you?

“Lalah and I go way, way back – we were actually at college together and have worked together from time to time. We first got together professionally on a project with Rickie Lee Jones and have worked together many times since. I knew for this song – ‘It’s A Man’s World’ – I just needed someone who could bring out the soul. Lalah was the natural choice and when I asked her she said yes straightaway. Everyone knows that she’s such a great singer… she uses her voice just like an instrumentalist. She brings a real deep soul to the tune and we’re delighted with it.”

“Wow! Simple – we we want it to take over the World! It’s not a serious album ‘In Hi Fi Stereo is a fun thing. We want it to make people happy and wouldn’t it be great if we could make more people happy through our music. We hope that listeners accept it for what it is – a totally “up” album that’s not really about what’s been done before. It’s about drawing on who and what inspired us and using that to make our own music – then putting it out there for a new generation of people who love jazz and soul.”