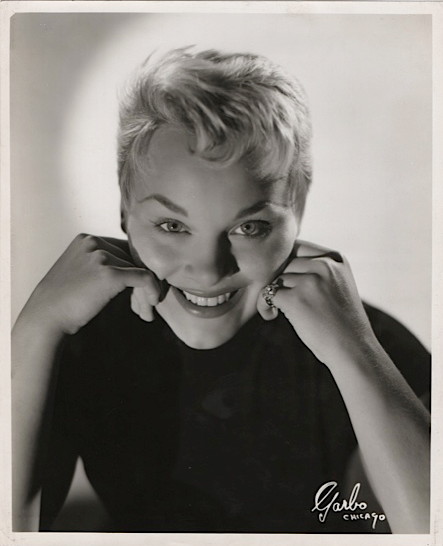 Remember Bev Kelly? Sadly, not many do – unless you’re a jazz vocal aficionado of a certain age. Back in the late-’50s, though, Ohio-born Ms. Kelly was a rising star having come to the attention of the US public via an appearance with the Pat Moran band on Steve Allen’s legendary TV programme, the Tonight Show. That led to a record deal for Moran and his band on the Bethlehem label and Kelly recorded three albums with the pianist before recorded a critically-lauded debut titled ‘Beverly Kelly Sings’ for the Audio Fidelity label. That was in 1957 and before the 1960s arrived she cut ‘Love Locked Out,’ one of two recordings she made for the revered jazz label, Riverside. But although her music career was taking off, a car accident in California – in which she was injured – made her take stock of her life on the road and she decided to put music on the back burner and devote her time to raising her son instead. As time passed, Bev expanded her interests outside of her domestic life by doing vocal coaching (among her students was rock star, Rick Springfield), writing poetry, becoming interested in photography and, perhaps most significantly of all, studying for a doctorate in psychology. After a long sabbatical she returned to making music in 2002, cutting an album with former Motown songwriter/producer, Jimmy Felber. Now in her late seventies, Bev Kelly talked exclusively to SJF’s John Wisniewski…

At what age did your musical training begin?

I started studying classical piano at age 5, and classical voice at 14

When did you meet musician Pat Moran?

Late 1954. We formed a duo and in late 1955. Pat added bass and drums and we became the Pat Moran Quartet with Bev Kelly.

Whom are some of your favorite jazz musicians, those who have influenced you?

What was the experience like adding vocals to ‘Porgy and Bess’ with Mel Torme?

We were a young, enthusiastic group and at that time we were recording with Bethlehem Records. They included us in their idea to record a jazz version for ‘Porgy & Bess’ and we enjoyed being a part of that event with some talented musicians, and of course Frances Faye & Mel Torme. We sang as a group along with some of the top group singers in LA at that time. It was a fun project to be part of.

Any remembrances of working with Scott LaFaro?

Scott was such a talented musician and it is sad that he died so soon. At the time of his death, he was working with Bill Evans on some of his most classic recordings. Scott worked with Pat earlier in his career and is was such a pleasure to have had the opportunity to have worked with him– he was very innovative, and very talented.

Then you took a long hiatus from the music world. Did you miss recording music during those years?

Not particularly. I was busy with school, and working in the field of psychology — I enjoyed the times that I did commercials, and working some clubs: that satisfied the music/creative side of me.

Could you tell us about the recording of ‘Portrait of Nine Dreams’ with Jimmy Felber? How did you meet Jimmy?

My sons introduced me to Jimmy – he was working various clubs with his group, and previous to my meeting him, he was working at Motown writing, and arranging. He had a hit with one of his songs called ‘Golden Girl.’ He is an accomplished musician, arranger, composer, producer, and engineer.  Jimmy has a top of the line recording studio with everything one needs to produce quality recordings – he did all the instruments from his many samples – Jimmy did all the arranging, recording, and engineering. After I met Jimmy, I mentioned on occasion that it would be nice to collaborate with him on a project – some friends of my sons contacted them and told them that my Riverside CDs had been reissued, and that inspired me to get together with Jimmy on the ‘Portrait’ project. It took us 4 years to do the CD between our schedules and the creative flow – it was fun and productive.

What other musicians join you both on those sessions?

We only used an excellent drummer, Chris Myers (a friend and musician that Jimmy worked with) on a few songs. Jimmy has a top of the line recording studio with everything one needs to produce quality recordings – he did all the instruments from his many samples. Jimmy did all the arranging, recording, and engineering but the CD was mastered by Mike Mierau.