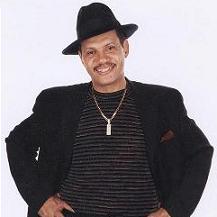 RONNIE MCNEIR is one of soul’s true gentlemen and I know he won’t mind me calling him a veteran. He himself readily admits he’s been around the block a few times but that experience allows him to craft some wonderful music. Though he’s now a permanent and valuable fixture in the FOUR TOPS, he still pursues his successful solo career…. a career that began back in the heady days of the early 70s. Then, proper soul fans became hooked on classics like ‘Wendy Is Gone’ and those same fans have stuck with the man ever since, assured that he keeps the “real soul” flag flying high. Earlier this year RON released his latest solo album, ‘ Living My Life’ (check out the review in our archive) and with the set riding high on the CD Baby charts we though it high time we reconnected and the best place to start was to ask the man about that new album……

My new CD is called ‘Living My Life’ and it’s something I’m really proud of… even though it took me two years to complete… but I like to take my time. I need to get things just right. I called it ‘Living My Life’ ‘cos a lot of the songs on there are about my life while there’s songs about other peoples’ stories too… people who have been a part of my life. You could say it was a tribute to myself!!!(Here RONNIE laughs)

Two of the album’s many high spots are covers of MARVIN’S ‘I Want You’ and CURTIS MAYFIELD’S ‘Gypsy Woman’… why did you choose those songs for the album?

Both those artists have always been big favourites of mine. I mean I’ve been with them since I was a kid! I loved MARVIN right back to ‘Hitch Hike ‘ and all that, and ‘Gypsy Woman’ is just one of my favourite songs and I always wanted to record a version of it. Matter of fact when I was a youngster I was in a number of vocal groups and we always sang it… but sang it in the original style. Now, years later, I decided to do it my way… it’s a little different. Even with ‘I Want You’, I tried for something different… just a different groove but hopefully I’ve retained the same special magic. A lot of people are liking these new versions.

My grandmother (my mom’s mom) was called MINNIE PRICE MARTIN and we were very close – our birthdays were just 1 day apart (14th and 15th December). In 1990 she had a stroke that put her into a coma and one day I was sitting at her bedside and I just started writing some words about her. After about an hour I had lots of words – they just kept coming. So I just left the paper on her bedside cabinet when I went home. Next day my mom told me that the nurses had found the paper and said they just loved it. So I thought I’d better make a proper song about it…which I did. But sadly she died just two weeks later; but I did get to sing the song at her funereal. I thought it would be a good idea to include the song on an album about my life.

How do you manage to fit in a fulfilling solo career along with being a member of the 4 Tops – how do the others feel about it… especially DUKE?

At the moment my solo career is all about recording… I’m not going out live just at the moment; while the TOPS aren’t doing any recording at all! When I joined I thought they might go on making records. You’d figure with a group with a name like theirs they still want to record… especially with a great singer like THEO PEOPLES. THEO, of course, was in the group before me and it baffles me why they don’t get into the studio with him. It’s clear to me that there’s no future recording-wise with the group, and, you know, I don’t get to make any decisions for them. I don’t run anything with the TOPS. Really, I’m there as a backing singer in a group with a great name. So it’s a job.. gets me some money and that’s as far as it goes. Don’t get me wrong. I’m grateful, appreciative and very blessed. Now a few years back the lovely Ms MILLICENT GEORGE (a respected US soul PR promoter) urged me to do some new recordings – so we put together the ‘Ronnie Mac and Co.’ album… and it was OK; but I think this one is better. And what the other TOPS think about it all I don’t really know because I didn’t have to ask anyone’s permission to do it… not even DUKE’S. How they feel is how they feel. But they can’t object to my recordings when they’re not making any of their own…and that’s a shame really.

You’re coming to Europe next year with the TOPS – what will the show be like this time around?

Sadly, it’ll just be the same show. I don’t like doing the same show all the time and I do disagree but like I said, I don’t get to make any decisions with them. I roll with the punches… but hey… it’s still a great show – great songs, great music.

Some unsympathetic critics say that the new incarnations of the TOPS (and THE TEMPTATIONS) are little more than “tribute acts” – being as they only have one original member – how would you counter that suggestion?

Well, of course, those critics have the right to feel how they feel – everybody doesn’t like everything. But the fans don’t seem to mind; it’s all about the fans. They love both groups and the music. It’s all about the music and not just the people up there on stage.

What’s the secret of the TOPS’ ongoing success?

I’ve been around the TOPS for a long time… RENALDO was like the brother I never had, and in all that time I’ve never seen any bad stuff in the news about them… no fall outs – nothing. I think they’ve stayed successful because they keep the personal business out of the media and of course, they always remember their obligations to their fans. They never miss a show – even when someone’s not too good they still go on. They just carry on.

Earlier this year Motown/Hip-o Select released a TEENA MARIE album that featured some of your old production and duet work with her… what can you remember about TEENA and those sessions?

That whole episode was a bitter/sweet thing. When I began in the business I had a local hit with ‘Wendy Is Gone’ and to help it break nationally I signed with BARNEY ALES and his Prodigal label. He bought my masters and he promised me air play and I couldn’t refuse. Then I shortly learned that BARNEY has sold Prodigal to Motown and I became a part of Motown without even being asked or signing any contract. I was always in and out of the Motown office and one day I heard this powerful soulful voice coming from another part of the office area. When I went to investigate I couldn’t believe what I found – a tiny, little white girl… like a hippy with a headband and guitar. I introduced myself and she told me she was just at Motown to present and demo songs for people like DIANA ROSS and THELMA HOUSTON. Man, she could sing so I went to Mr GORDY to see if I could get to work with her… that was about ’76 or ’77. I just remember this powerful voice. I enjoyed working with her and we became great friends. You know, she was a lovely person.

In the sleeve notes to that TEENA MARIE album, it’s suggested that TEENA wasn’t too keen on working with you; she felt Motown were trying to turn you and her into a double act (like MARVIN AND TAMMI) … what would you say about that?

Well, at the time she never ever said anything like that to me. She might have felt like that later… but, you know, we only ever did three duets; most of the songs were just on her… and they were her songs. I just arranged them. Then Motown took her from me. They said they saw her as a rock artist and I was taking her in the wrong direction! Then, of course, I left the company.

Is there any more RONNIE MCNEIR Motown work in the vault that we don’t know about?

Yes – a lot, an awful lot. They’ll probably do me the same way they did TEENA – soon as something from RONNIE MAC makes some noise, they’ll come up with something! I think another company – Expansion or something – relicensed my Motown album ‘Love’s Coming Down’. They do have the right to do that, of course… but I will say this – all these people licensing stuff on me aren’t sending me a dime!

Looking forward now, how will you be promoting the new album… are you going on the road with it?

I’m promoting the album mainly through the internet. Nowadays, older artists like me don’t get a look in on the radio. Anyone over 25 can’t get anything played no matter how good it is. So, thank God for the internet and places like CD Baby, I Tunes, Amazon and so on. I really respect these companies. Without them people like me would have no chance. In the future, well I do plan to go on the road… but only when there’s more activity on the record.

What else is in the future for RONNIE MCNEIR and any messages for your fans in the UK and Europe?

I’m very busy. There’s the stuff with the TOPS and I’m also working on my next solo album. It’s going to be called ‘The Jazz In Me’ and will be mostly cover versions with a few originals. I’m working on stuff like ‘You Send Me’ and ‘A House Is Not A Home’. We’re also putting together a TV show. I’ll be working with a real funny guy called COBY NICHOLS. He’s actually the valet/wardrobe manager for the 4 TOPS but together we’re working on a show that will be a little like Amos And Andy or Sandford and Son… a mix of comedy, music and discussion. In the long term I’m just going to keep on making music. It’s just in me… I don’t do anything else… and for my fans in England and Europe I just can’t express enough thanks and appreciation. They are the ones who keep me going. Without them, RONNIE MAC would be forgotten… so I thank you all, and remember I still need you.

RONNIE MCNEIR’S ‘Living My Life’ is out now and available from all the usual internet outlets.