KNIGHT TIME IS THE RIGHT TIME 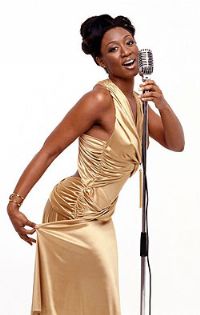 Resting on her laurels? Not likely. BEVERLEY KNIGHT readily confesses to being ambitious and liking a challenge so it comes as no surprise, perhaps, that even though she’s collected an MBE from the Queen and has been the recipient of three MOBO awards, the 36-year-old Wolverhampton-born soul singer is not taking her foot off the gas pedal. After spending eight productive years at EMI’s Parlophone imprint – where she racked up a slew of UK chart hits – Knight has elected to go it alone and recently set up her own record company, Hurricane. Her label’s maiden release is ‘100%,’ the Black Country chanteuse’s first album since 2005’s acclaimed long player ‘Music City Soul.’ Beverley took time out from her busy schedule to talk to www.soulandjazzandfunk’s Charles Waring about the latest – and arguably most exciting – phase of her career.

It’s a much more contemporary album than ‘Music City Soul’ was. This is quite up-to-date. I wanted something that was completely fresh to me – great songs and everything but with a really up-to-date production behind it. We’ve achieved that and I’m really, really pleased with it.

You had a long association with Parlophone and now you’ve started your own label, Hurricane. What was the reason for that?

Basically, I feel as though the old model of record labels and what they are and what they are doing is changing day by day. The whole old school way of making records has been revolutionised by the digital age and it’s not necessary for someone in my position at my time of life and with the career that I’ve got at the moment to have a major label that generates a lot of money but takes a lot of it too. I wanted to be in control of my own creative and, obviously, financial destiny. The deal that I was in with EMI had come to the end anyway…it was just a matter of shall I stay or shall I go? And I was like ‘okay, goodbye!’

How did that feel?

No two ways about it – it was scary. It wasn’t a walk in the park decision. Having a major record label on your side – when they are absolutely on your side – breaks your career wide open and exposes you to so many things and Parlophone did just that. I can’t argue that fact at all; obviously because their marketing, distribution and financial arms are so powerful. But there comes a time where your name is out there and your ‘brand’ is out there and folk know who you are. You need to be able to cherry pick the team around you to work the record that you believe in and feel strongly about. It’s no secret that often artists and labels will have tussles and disagree with things and I was no different.

Your collaborators on this album include pop songwriter, Amanda Ghost (who co-wrote James Blunt’s ‘You’re Beautiful’). How did that collaboration come about?

Amanda had wanted to write with me for donkey’s ages but for one reason and another it just never happened. But once I had my own label it was a piece of cake. It was like ‘let’s get together: what the hell are we waiting for?’ We got in the studio with two lads called The Rural – really talented English lads – and just came up with the single, ‘Beautiful Night,’ and also another track called ‘Gold Chain’ that’s funky as hell. Amanda’s got a great sense of pop melody – those things that the public hang on to. She writes this open melody – Chris Martin (of Coldplay) does the same thing – which is easy to sing and almost anthemic.

Tell me about the duet with Chaka Khan on ‘Soul Survivor’.

I wrote it with Guy Chambers – another fantastic melodic writer – and I was thinking of someone like Tina Turner singing it and then I sung the song and said actually, ‘I want it for myself’ because the lyric is as true for me as it is for anybody who’s been in the industry for a little while. But there was an element of it that needed someone else – frankly of legendary status – to really ram the message home and Chaka and I had wanted to work together for ages. She did some clean-up bits when she got back to Los Angeles but we did the singing together. I went in first and sang my bit so she knew exactly where she was going and what she was doing in terms of the framework of it. Then she came in and absolutely tore an arse through the tune. She’s a fantastic woman, full of life, full of energy.

Have you got any unfulfilled ambitions as regards music?

Oh yeah. Every single time I pick something off the list another ten things appear. Internationally, I am absolutely determined to make some serious inroads into different territories, particularly the States. One area of big consternation for me was that EMI never commercially released me in the States – not ever. And to this day I don’t know why.

How has Michael Jackson’s recent death affected you? Was he an influence on you at all?

He was insomuch as you couldn’t escape the magnitude of his music. Everybody knows I’m a diehard Prince fan. Back in the day it was either team Jacko or team Prince. I always came down on the side of team Prince because he was just my man. I was going to marry him one day – it was that deep (laughs). However, that was not to the exclusion of Michael Jackson’s music. It was a great shock that he died but not an entire surprise because you had the feeling that he would never make it to old age – he didn’t want to be old and he got his wish. It was quite a heartbreaking situation really when you think about it because the very thing he craved for in life he achieved in death – you know, immortality. But he was an influence: he was an influence for anybody who’s ever made a black pop record because he was the one who did it and did it convincingly. He was the main torchbearer for crossover music. He really did defy age groups, colour, race and all those kinds of things in terms of the sound of his music.

‘100%’ is released via Hurricane Records on September 7th. The first single from the album, ‘Beautiful Night,’ is released the same day.