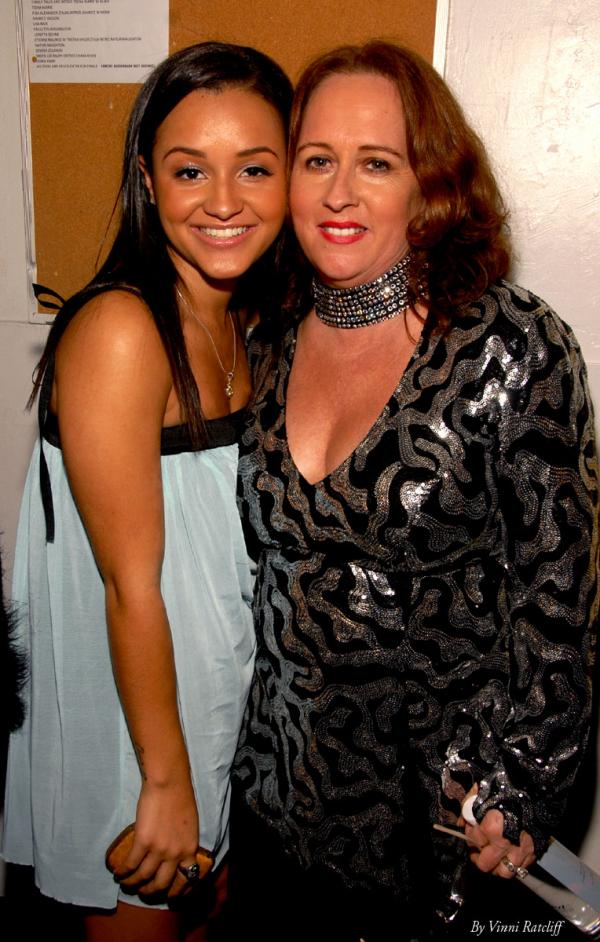 When the legendary Californian singer/songwriter, TEENA MARIE – who was revered in R&B circles as ‘The Ivory Queen of Soul’ – died suddenly at the age of fifty-four from an epileptic seizure on December 26th 2010, soul music fans around the world shook their heads in disbelief and shock. Imagine, then, what it was like to be the singer’s teenaged daughter, Alia Rose, an only child who was left orphaned by an event that all human beings find tremendously hard to accept and digest let alone process and move on from.

But the courageous young singer – who featured on several of her mother’s recent albums in the guise of Rose LeBeau, including the duet ‘Milk N’ Honey’ from the 2009 album, ‘Congo Square’ – found solace by channelling her grief into finishing an album project that her mother had been working on just prior to her passing. The album in question, ‘Beautiful,’ has just been released in the UK via Universal and young Alia, now twenty one – but who is blessed with a level-headed maturity well-beyond her tender years – recently talked to SJF’s Charles Waring about her work on the project. She also recalled fond memories of her mother as well as disclosing her own ambitions for a career in the entertainment industry…

How have you been coping with the loss of your mum?

It’s been very difficult as a process. I’ve been learning things about myself every day. To be so young and to lose a parent is very unfortunate. I think the hardest part is just wanting to know that I’m doing the right thing.

How difficult was the process of completing the album?

It was very complicated but I knew that it needed to be done. There was never a doubt in my mind that I had to get it done. The album was completely recorded so it was almost done and all I had to do was mix it and master it though my mum didn’t have a record deal at the time.

Were you working on it with your mum when she passed away?

I did a few songs with her but I wasn’t really doing much. I wrote and recorded a few songs but we were not always being creative together on this project. I just became very involved by default.

Do you think the album has come out pretty much as your mum envisaged it?

A track that particular caught my ear is ‘The Long Play.’ Is there a story behind it?

‘The Long Play’ is a duet with a woman named Dee Dee O’Neill. My mum only did a few duets and it was with this woman – and it happened to be the only woman, one of the only women,  she did a duet with and she did one on ‘La Dona’ with her as well. It was called ‘I Love You Too’ and she’s got an incredible voice. She’s one of my favourite singers. As far as the opening, the (rap) intro, by my mum, I had never heard it until we went to mix it. That was actually left in the can and Eric Zobler, who was the mixer, he brought it out of the can. It was crazy. It was absolutely amazing to hear that. It was shocking.

The spoken section at the very beginning done by your mum talks about a heavenly radio station – it almost seems that your mum had a premonition. Do you have that feeling as well?

I do. I think that my mum knew that she was actually going to pass. I really do. My mum was a very spiritual person and I fear that she knew what was going on at that very time. I really do.

You co-wrote the songs ‘Sweet Tooth’ and ‘Rare Breed.’ What was it like writing with your mum?

It was amazing. I loved doing it with her but honestly, you know, we’re mum and daughter so we were always crazy: we would argue a lot and fought a lot in the studio. She’d tell me what to do and I didn’t want to hear it. You know what I’m saying? But at the end of the day it was going to help me not hinder me but it was always a show for anyone who was watching (laughs).

There’s a great version of the Curtis Mayfield song ‘Give Me Your Love.’ Do you know what inspired your mum to cover it?

My mum always loved that song. We actually did it on tour. When she went on tour we did a cover of it in her show. It’s such a great song and my mum loved Curtis Mayfield and it just seemed that it was like the right thing to do. I think both of our voices sound really good singing it and that’s how it came about: it wasn’t some special story special story behind it but it was a song that we loved and shared together.

Do you have a favourite track on the album yourself?

I have a few: ‘Definition Of A Down,’ ‘Wild Horses’ – which is actually the next single – but ‘The Perfect Feeling’ is probably my ultimate.

Do you think that working on this album brought you closer to what your mum was doing?

I think it brought me closer to who my mother wanted me to be. I think that’s what it brought me closer to. I was a kid when she passed and I kind of had to grow up a little bit and become more of a woman. And by being able to finish this project I feel that  I’m closer to myself – I feel that I know how to do things and I feel my power as a person. It’s an amazing feeling to know that she’s gone and the album just came out and she’s still being heard even though she’s not here. It’s amazing.

It must have given you some kind of strength going through what you went through.

Oh yeah. I feel that I can do anything right now – I’m a superwoman. (Laughs).