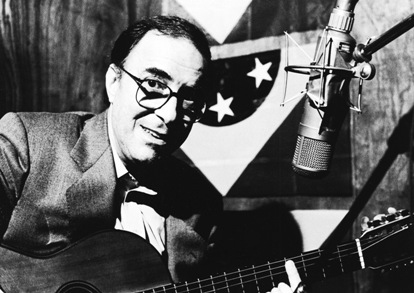 The late singer, guitarist and songwriter helped to ignite bossa nova’s quiet revolution in the 1960s.

João Gilberto was catapulted to international fame in the early 1960s as one of the principal architects of Brazil’s popular bossa nova style. He patented a unique musical language, which with its sensuous intimacy, caressing melodies and gentle but insistent rhythms was both hypnotic and hauntingly beautiful. His death at the age of 88 on Saturday July 6th, which was announced via social media platforms by his family, brings the curtain down on the distinguished career of one of Brazil’s most admired musicians.

Gilberto was born João Gilberto Do Prado Pereira De Oliveira in a small town in Brazil’s northern Bahia region called Juazeiro on 10th June 1931. He was given his first guitar by a relative when he was fourteen and quickly sought to master the instrument and become a singer. He moved to Bahia’s capital city, Salvador, endeavouring to establish himself as a resident crooner for local radio stations, though without much success. In 1950 he went to Rio de Janeiro, ostensibly to join a vocal harmony group called Garotas Da Lua, though he was later fired for unreliability and tardiness. Even so, he cut a couple of 78 rpm singles in 1951 though they failed to launch his fledgling music career. He then left Rio and for several years afterwards, his life seemed to drift aimlessly along, much to the dismay of his father,  who genuinely thought his seemingly work-shy son needed psychological evaluation and got him admitted to a mental hospital. Gilberto stayed there a week for tests and was then released without further investigation.

After overcoming this hurdle, Gilberto’s career gained traction in 1956 when he moved back to Rio de Janeiro and found a kindred spirit in a classically trained pianist and former architecture student called Antonio Carlos Jobim.  As well as forging his own jazz-inflected style playing in Rio’s bars and nightclubs, Jobim  was employed as an in-house arranger, composer and producer for Odeon Records. He was impressed by Gilberto’s unique sound – where he laid half-whispered, vibrato-less vocals over an accompaniment consisting of percussive and highly-syncopated acoustic guitar chords – and produced his first album, Chega De Saudade, for Odeon in 1959. With its marriage of sensuous Brazilian samba rhythms, jazz-derived harmonies and delicate orchestrations – epitomised by the songs   ‘Desafinado,’  and the Gilberto-penned ‘Bim-Bom’ – it laid the foundation stone for what became known as bossa nova (its English translation is “new trend”).

Though a critical success in Brazil, Gilberto’s debut LP didn’t please everyone – when the album was shipped from Rio for distribution in Sao Paulo, legend has it that a disgruntled Odeon executive said “Look what a piece of s*** Rio has sent us” and proceeded to smash the record up in protest. But Gilberto had the last laugh, and his success resulted in two further albums with Jobim at the helm (1960’s O Amor,  O Sorriso e a Flor and 61’s João Gilberto), which helped to transform the quiet-voiced singer into a national sensation in his native Brazil.

Bossa nova spread to the USA soon afterwards, initially via enthusiastic American jazz musicians such as Herbie Mann and  Charlie Byrd, who had ventured to Brazil and been entranced by the exciting new sounds emerging there. Byrd’s fascination with bossa nova led to the landmark album Jazz Samba, recorded in 1962 for Verve Records with tenor saxophonist, Stan Getz, which included a hit cover of ‘Desafinado.’ The album spent 70 weeks in the US pop album charts and prompted its producer, Creed Taylor, to invite the architects of bossa nova – including Gilberto and Jobim – to New York’s prestigious Carnegie Hall album for a concert on 21 November 1962. Though some critics described the concert as shambolic, it proved a huge success and lit the touch paper for the bossa nova revolution in the USA.

Gilberto became a household name shortly afterwards when Taylor put him in the studio with Getz (pictured above with Gilberto) to make the album, Getz/Gilberto. Now considered a classic, the album included the Grammy-winning million-selling hit, ‘The Girl From Ipanema,’ featuring the vocals of Gilberto’s then wife, Astrud (whose own career, ironically, would go on to eclipse her husband’s). Despite the language barrier that separated them, Gilberto and Getz established a deep musical rapport. Such was their bond that the Brazilian said of the US saxophonist: “There isn’t any American whom I’d rather hear playing the music of my country.”

The Getz/Gilberto album made a lot of American jazz musicians sit up and take notice of the bossa nova phenomenon. Even Miles Davis was impressed, saying: “Gilberto, he could read a newspaper and sound good.”

The same year that Gilberto was flying high in the US charts with his Getz collaboration, his homeland suffered upheaval when a military coup installed a repressive governing regime, which led Gilberto to live in exile in the USA. He recorded a second album with Stan Getz (Getz/Gilberto Vol. 2) in 1966 and then in 1970 found himself living in Mexico, where he stayed for two years and recorded João Gilberto En Mexico. He didn’t make another album until 1973, when Polydor issued João Gilberto. He reunited with Getz again on the saxophonist’s Best Of Two Worlds LP for Columbia three years later and in 1977 cut the highly-regarded Warner Bros. LP, Amoroso. In 1980, he returned to Brazil and celebrated his return home with the 1981 LP, Brasil.

His album releases in the 1990s were sporadic and in 2000 at the age of 69 he recorded his final studio album called João Voz e Violão, an intimate voice and guitar recital on the Universal label which was nominated for a Grammy. A live album, In Tokyo, followed for Verve in 2003, but that was the last the world heard from Joao Gilberto, who in recent times purportedly became a recluse and suffered a marked deterioration in his health as well enduring financial hardships.

The late Claus Ogerman, who wrote orchestral arrangements for Gilberto’s Amoroso album remembered that he found the Brazilian musician to be taciturn and very withdrawn when they worked together. He recalled to this writer in 2008 an occasion when he went out for dinner with Gilberto and his producer, Tommy LiPuma.  “Joao was sitting next to us,” he said, “not saying a word and not eating anything. He was just staring at the table and he did that for three hours…he was that kind of a guy.”

Though his temperament, it seemed, was not suited to fame – he was unequivocally a reluctant star of the style he helped to create – his shyness and reticence certainly gave him an aura of mystique. At heart, he was a poetic minimalist whose singular style was a blend of both sophistication and simplicity.  And the incantatory effect that his performances generated seemed to  capture the enigmatic essence of an influential musician whose gift to the world was the irresistible bossa nova beat, which the world still dances to.

Reflecting on Gilberto’s importance in the rise of bossa nova, Antonio Carlos Jobim (pictured above with JG) once said of his friend and compatriot: “The guy who brought us the beat was Joao Gilberto. In bossa nova, there were many guys involved, but Joao Gilberto appeared as a light, a big star in the firmament, in the heavens. He became a focus. He was pulling the guitar in one way, and singing the other way. It created a fluid thing that was profound.”

Gilberto is survived by a son, Joao Marcelo and a two daughters: Bebel, who is a noted singer in her own right, and Luisa Carolina.