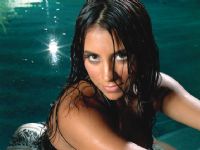 Mexican/American saxophonist/singer, JESSY J is one of the hottest new artists on the US jazz circuit. Her debut album ‘Tequila Moon’ topped the jazz charts and her new set – ‘True Love’, looks set to repeat the feat. JESSY was recently in the UK to play a series of headlining dates so www.soulandjazzandfunk.com‘s ultra-smooth, Smooth Jazz commentator BILL BUCKLEY caught up with her to enjoy the music and to find out just why she became 2008’s Jazz Breakout Star… but first we wanted to know how she got involved in music in the first place….

I started with music when I was just 4… learning simple things on the piano – then when I was 9 my sister and I joined the elementary school band. I wanted to play the flute, but too many kids were already playing it, so the band director asked me to learn the saxophone. I really enjoyed playing the alto and naturally I started to listen to jazz. Then when I was 15 I heard this record by Cannonball Adderley with Sergio Mendes and Brazil ’66. I really fell in love with that sax sound, the feel of the samba, those Latin rhythms and all that great percussion. I then went off to study at the University of South California where I majored in jazz studies and all through college I performed professionally; then after graduating I went on a world tour with a show called ‘Blast’. After that I worked in the road bands of people like Jessica Simpson, Michael Bublé, Michael Bolton and even the Temptations! Jazz was always my first love though and I eventually met up with Paul Brown and we worked on my first album – ‘Tequila Moon’- which went to number 1 on the jazz charts and of course, this year we released ‘True Love’ and right now the track ‘Tropical Rain’ has gone to the top of the jazz singles chart.

Politeness prevents me asking your age, but you’re still very young… and jazz is often seen as an older person’s music… what attracted you to the idiom?

Well, I think I’ve got a bit of an old soul in me! Jazz?…It’s the music I love to listen to. For me it’s so creative and spontaneous. I really love the interaction between all the musicians – it’s phenomenal. It’s a challenging music – and I just love that challenge.

Apart from Cannonball Adderley and Sergio Mendes – what other musicians have influenced you?

Hey… I’m a big fan of all sax music and especially what Candy Dulfer’s doing right now, but I only really got to know her when I left college. Before that I listened to all kinds of music – what all the kids listened to – Michael Jackson, Madonna and, of course, Motown. At home we listened to music all the time – a lot of it was Mexican and Latin… there’s always been lots of different types of music around me.

… So what about the new album… what were you hoping to achieve with it?

The new CD’s called ‘True Love’ and it was produced by Paul Brown and, yes it sounds obvious but it’s all about love – you know falling in and out of it. I wanted it to be a kind of concept album – something you can sit down to and listen all the way through… enjoy a glass of wine with it and tap into all the emotions in the music. Hopefully, everyone will find something to relate to.

Most of the tunes are originals – but the big cover is a version of the ‘Black Orpheus’ song, ‘Morning Of The Carnival’… why did you choose that one?

I love that song and its feeling and Paul suggested we put it on the album. He felt we needed to include a standard – but bring a new kind of life to it… so we gave it faster beats and we think it comes over as new and fresh.

… and what about the future… what’s your main ambition?

I’m just happy to have ‘True Love’ out and doing so well and, of course, headlining my own tours. I’ll be back in the States soon – working all over the place , then hopefully back to Europe and Japan… and my ambition? Well I’d love to record at least 8 more albums, so that I can say I have 10!

JESSY J’S ‘TRUE LOVE’ is out now on Peak Records