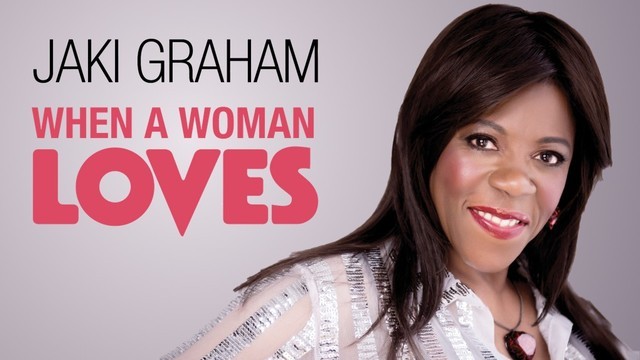 Birmingham’s JAKI GRAHAM has a wonderful music CV, stuffed with enviable achievements – most notably the fact that she was the first British black female solo artist to enjoy 6 consecutive top 20 hits. Of late, though, we’ve not heard too much from her – till this month when she emerged with a wonderful new long player, ‘When A Woman Loves’ (see our reviews archive). Most would see it as a kind of “comeback” however when we met up with Ms Graham for a chat about the album, she didn’t see it that way and she insisted that despite what some soul commentators have said she’s NOT the “forgotten woman of Brit soul”!

Not at all! I don’t feel forgotten as I’m constantly working, all the time, worldwide. I definitely feel I’m a part of people’s history. And although I’ve been quiet in the UK I’ve had releases internationally that have done very well, so I’ve still been flying the flag for the UK. The fans still give me the love and have been very patient in waiting for the new material. It’s also nice to know that I get a lot of acknowledgment from my peers who recognize me as having been one of the first to open the doors for British female artists who followed.

OK tell us about your career post 80s ….. how hard have you found it to find work and get record deals…..Your PR sheets talk about a “challenging life journey” – are you prepared to tell us about that?

After all the hits in the 80s I secured a deal with Avex in Japan where it turned out I had a huge following, so the 90s was pretty busy for me too. I had the hit with Chaka Khan’s Ain’t Nobody which was No.1 in the US Billboard Dance Charts for 5 weeks and I think the follow up single got to No.3 or 5, again for 5 weeks. The albums with Avex sold so well they decided to release another 2 albums of tracks that didn’t quite make the cut for the first 3. So, with all this material I was constantly touring, whether it was across the US, Japan, Australia, Europe and then I always have gigs back home here in the UK. I suppose after leaving Avex I never really actively looked for another deal. It had been made clear in earlier years that I was probably of an age where I was too old to be able to get another deal so I was content performing live, as fortunately the hits and my catalogue have stood the test of time. As for my challenging life journey then more recent years were tough as I lost some very close friends to Cancer (which I also lost my parents to when I was younger) and amongst all this, nearly lost my husband Tony of 41 years, to heart failure which was tough. It was my daughter and manager Natalie who pushed me to record as she was convinced I had a story to tell and we could release new music ourselves, especially as we’re now in the digital world of social media (which I’m still trying to get my head around). Once Tony was a bit better, the time felt right to start sourcing new songs and that was the road that’s led us to where I am now.

So this is the big comeback then… that’s what this album feels like?

No, I really don’t see it as a comeback as I’ve never been away on the live scene. People may interpret it that way and measure it by chart positions but I’ve never taken a break from performing. It was important for me to get the right songs and producers as I’ve been fortunate enough to work with some real greats in the past. Once the first song came through I think this definitely helped to get the ball rolling and from there the songs that followed all seemed to tell part of my story, or so I feel. It’s been a very organic process, nothing forced, it’s all progressed naturally which I think helps to take some of that pressure off too, as you don’t have label execs in the background chasing for new music. I’ve been given the freedom to create this in my own time.

On the new album….. One of the key cuts seems to be ‘Get It Right’ – does this mean you got it wrong last time – wrong even back to the 80s?

No, I keep saying it … not at all! If you listen to the lyrics of the song it’s a feel good vibe, reminiscing about the good old days, before bills and responsibility, when people were young free and single. So many fans tell me I was part of their soundtrack growing up so it’s simply encouraging people not to lose that essence. Plus, with the support of Radio and the fans back in the day I felt I did well. I didn’t have the full support of my record company but it was the general public who spoke up for me and created that demand. This is my way of giving a little something back to them.

That track drips in 80s nostalgia… would you really like to go back?

The 80s was a great era for a lot of things with some very fun times. From the music, film, fashion, you name it. I got to travel, visited countries I never imagined having the chance to see and I got to do all this with my family in tow which makes it that much more special. I can look back on that time very fondly. But, today’s a new day and I wouldn’t be the person I am today without having gone through some of the experiences I have, so no I wouldn’t go back as there’s so much to look forward to in the future but I also wouldn’t change anything for the world.

Another 80s flavoured track is ‘About Your Love’ … is that a sample from Loose Ends or were you just inspired by them?

No samples in this track, it’s brand new! Le Flex who wrote and produced it has been a fan of my music from day 1 and had always wanted to work with me. He knew my material inside and out and wrote this gem especially as he could just see me on this kind of vibe. I’m sure there are a number of influences in there including Loose Ends. He definitely went back to the old sounds as he wanted to create something that he felt a true Jaki Graham and soul fan would want to hear.

The set also boasts three Michael McDonald songs…. tell us about them… why did you choose them?

I’ve known Michael for years now, he’s one of my dearest friends and we’re like one big family. He’s written songs on my previous albums, so when Natalie stayed with them and was talking about putting this album together, Michael sent her home with ‘Song Inside Me’. Well, when I heard it, it was as if he’d seen inside my soul. It said everything I was feeling at that time and from there he sent across an additional 2 tracks, which were again very meaningful. ‘Through The Rain’ and ‘Someone Like You’ both speak to people who may be going through tough times but they also have ‘hope’ within the songs, which I think is what people will relate to the most and find uplifting.

Apart from those three and the Eric Benet, the Bill Withers and Maurice White songs, are all the others originals?

‘News For You’ which Eric was more than happy for me to record and ‘Use Me’ by Bill Withers are the only covers. The Michael tracks and ‘Eye To Eye’ by Maurice White are all originals so yes, people will be getting brand new material.

What’s your favourite track… the one that’s dearest to you?

It would have to be ‘Song Inside Me’ by Michael. Not only was it the first song that triggered the rest of the album but it also means so much. The lyrics are so powerful.

How will you be promoting it and what do you really hope for it?

We’ve got tour dates being lined up across the UK for later in the year, but with this being a worldwide release, I know they’ll be keeping me busy for the next 12-18 months. I’ll be travelling here, there and everywhere whilst doing the usual radio, tv and press. I just hope the fans like it. There’s something for everybody with the lyrics, melodies, production, you name it. It’s an all round album that the whole family can enjoy.

Finally everyone knows you’re a great singer and worked hard… how do you feel about the new generation of instant talent show stars…. have you ever been tempted to take part in any of those oldies reality shows

Listen, each to their own! The word celebrity doesn’t necessarily carry the same weight as it used to as there’s so many people hungry for fame, and some people will do anything to get it. I don’t watch reality TV myself or any of the talent shows. I do meet some of the individuals along the way who have created a name for themselves via these platforms. Some accept it for what it is, others get a little more sucked into the machine. I just tell them enjoy the ride, make the most of it and surround yourself with good people because it won’t always be that way, but be sure to embrace and appreciate every moment of it. As for me, I’m not really a fan of going down the reality route but as with anything in life, never say never.

How can we find out more about Jaki Graham and the album?

My album ‘When A Woman Loves’ is released on the 6th July. You can find everything on my website www.jaki-graham.com where you can also pre-order now! You can also go direct to all the usual platforms, iTunes, Spotify, Amazon, Google Play etc. For those on twitter you can find me @Jaki_Graham and of course there’s the Facebook page and Instagram. I don’t think I’ve missed anything out so I hope you all enjoy!

JAKI GRAHAM’S ‘WHEN A WOMAN LOVES’ is released on July 6th…. see our reviews section for more details