IN THE REALMS OF SOUL! 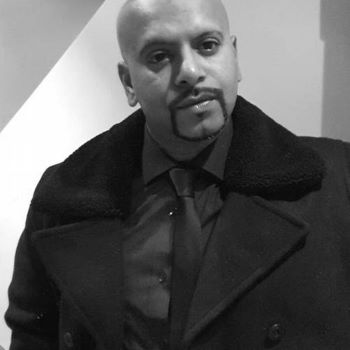 Berkshire born MANNY RAHELU is one of UK soul’s best kept music secrets. Serious soul connoisseurs though will know of his sterling work under the name “THE REALM”. Under that moniker, Manny produces his own music and creates intriguing remixes of soul   and funk classics. The most recent was an inspired tweak of Maxwell’s ’Ascension. Don’t Ever Wonder’. Manny placed Maxwell’s smooth n’ silky vocal over a catchy and very different (to the original) backing track to offer a fresh perspective on something very familiar. No wonder it was taken up by the UK soul crowd – so what  better time to catch up with Manny to find out a little bit more about his unique methods and to discover what other surprises he might have to offer. He began by telling us  a little about his background…

So, my soul background began back around 1983-84. There was always music being played in the house and my cousins who lived next door would usually be playing music too, which was mainly the soul that was out around that time. I just loved the sound of the synths and the funky basslines, and not forgetting the Roland 808 and Linndrum drum machines which were very much in vogue at the time.

Why do you use “the REALM” as your working name?

I needed a name that wasn’t singular. Going by my birth name was not an option, as I don’t play any instruments or sing it had to be a collective name as I knew I would be featuring artists on my own tracks at some point other than just doing remixes. The Realm actually came about from watching Game Of Thrones, the ‘realms’ were mentioned quite a bit in it, and I thought it was apt.

It seems that there are now two strands to your music – the music you create yourself and the special remixes of the well-known… is that right?

That’s right. Coming from a DJ background, mixing records was just natural. Taking an acapella, mixing a beat with it, trying to create something different. A majority of the remixes I do are usually ones I have been asked to do,  taking an old school mid-tempo track and making it a bit more dance floor friendly. A lot of the time when I’m producing my own tracks, I will throw an acapella of something on it to give me an idea of what it would sound like with vocals, sometimes they will just fit too nice, and a new remix is born.

What kind of sound are you aiming for with our own music?

Individual. I don’t like to follow the crowd but try not to stray too far from the current sounds. I love digging for obscure breaks and samples, originally coming from a Hip Hop background it’s a part of what I have grown up listening to. Analogue sounds, knocking drums, it’s got to have that raw feel to it. Genre wise? I’d like to think of the current productions more 90’s RnB flava with that soul edge.

What’s been the most successful track to date?

Definitely my ‘Diamond Cut’  remix. Which was released in memory of my nephew who I lost in 2018 aged 8 to a brain tumour. All the proceeds from the original and the remix were donated to The Raj Rana Fund/ The Brain Tumour Charity. It has done exceptionally well, with over 350K streams and several hundreds of pounds raised for the charity.

Now the remixes – how do you choose the songs to work on?

If I think I can make a song sound better in my head, I will give it a go. The ones I can get the vocal stems to will always sound the cleanest. However, if I can isolate just the vocals enough on some tracks, they will work, these are just usually for DJs playing out and not for radio play. Or again, I will get asked to do them.

I will never sell an independent artist’s songs. Being an independent artist myself, I know the hard work that goes into a production, from the initial idea, to receiving the master recording back. Without a major label behind you it can be pretty tough and expensive, especially if you do it on your own like I do. I always try to contact the artists if I have remixed their song. Most will reply and are happy for me to give it to radio DJs only. And in some cases are happy to make them official as was the case with Kim Tavar and Jane Handcock, and a few more which you will be hearing over the coming months. There are a few remixes on the website from major artists, almost impossible to get hold. However, I would class the sales from these as ‘beer tokens’, not enough for a Lamborghini and I’m sure they wouldn’t mind.

What would you say to a critic who might suggest that tampering with a classic – like say Maxwell’s  ’Ascension’  is almost  a sacrilege?

Hahaha, the Maxwell remix. You’re right, it is a classic and one of my favourites by him. It was not supposed to be a remix. It was an original Realm production, I just added the vocals just as a taster to the finished track just to hear some lyrics on it and they fitted great. I gave it to a few DJs to play on Mixcloud etc and before I knew it everyone wanted a copy. It was a risk, but I think it paid off.

Your mix on the Maxwell was top class, by the way, what other mixes are you particularly proud of?

Thank you. Well, I have done far more than anyone has ever heard and probably ever will due to copyright issues etc. It’s hard to choose favourite ones for me. But one I’m particularly proud of is a remix that has not been released as yet. I was asked personally by none other than Jimmy Jam (Jam & Lewis) to remix a track for one of his artists. Can you believe that?! Jimmy Jam! Fingers crossed it gets a release. But if I had to choose one, it would be from my favourite soul singer Luther Vandross – ‘Make Me A Believer’.

What other new ones can we expect in the future?

I have just completed a project for the wonderful H’Atina, ‘Forever Remix’, to be released in a couple of weeks. A collab between the fabulous Kim Tavar and myself coming soon. A few more which I can’t disclose just yet, but they are fire! And not forgetting my own track, ‘On My Mind’ to be released early July. Plenty to come from The Realm yet!

For all the latest news, tracks and remixes, www.therealmmusic.com –   sign up for free. You can also find me on Instagram and my YouTube channel has plenty remixes on there too.

Finally, we often ask our interviewees to name their three favourite soul records….

Wow, that’s not easy but let’s see… what about Juicy – ‘Sugar Free’, Luther Vandross – ‘The Night I fell In Love’ and Cheryl Lynn – ‘Encore’.