IN THE MIX …TOM MOULTON REVEALS ALL (WELL ALMOST)….. 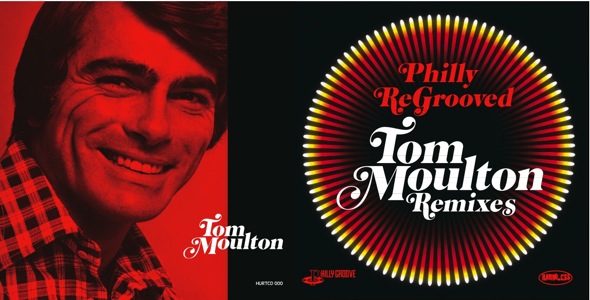 One of this year’s best soul compilations by a good distance is ‘PHILLY RE-GROOVED’ on the Harmless label. It was so good for two main reasons – first the label had access to the riches in the vault of Philly Groove Records and, secondly, Harmless managed to persuade the legendary TOM MOULTON to remix the music. The result is a sparkling tribute to the sounds of a great label and a great way for Harmless to celebrate their 100th release. When the Harmless people asked if we’d like to talk with TOM MOULTON, we grabbed the chance and began by asking him how he got involved in this particular project….

EID WHITELAW (Philly Groove’s chief executive) asked me to do just a couple of mixes after he heard some I’d done when I was transferring stuff for him on some of the  original Philly Groove tapes. Then he approached IAN DEWHIRST (one of the top brass at Harmless) and he loved the whole idea … then the project was on its way.

What’s your favourite track on the album?

It’s difficult to pick just one because there are several that I really love. ‘Don’t Put Me Down’ by FINISHING TOUCH, ‘Whatcha Gonna Do’ from HEAVEN ‘N HELL and ‘This Is The House Where Love Died’ by the great FIRST CHOICE all spring to mind.

Using the FIRST CHOICE tune as an example maybe you could take us through the whole process you use to achieve your end result?

‘This Is The House’ was a 16 track tape. I get the basic sound on each of the 16 tracks equalised then I mix the rhythm section so that it’s nice and tight. That’s simple … the basis for all my mixes. Then – I start adding the overdubs… percussion, keys, horns, strings and then vocals. Once I get that, then I will see where I can put in a break – but only if it sounds natural and maybe some more instrumental pieces. I don’t like to lose the feel of the original song by getting too creative with it.

Broadening out our discussion now ­ who are the best people you’ve worked with ­ either directly or by remixing their music?

I would have to say THE TRAMMPS. The joy I felt working with them over the years and on so many albums was just the most exciting part of my career. When I knew it was time for another TRAMMPS album I would be up in the clouds.

Do you only work with music you like and respect… have you ever remixed something you weren¹t too keen on in the first instance?

Nowadays, I only work on songs I like… Sometimes, in the past, though, I had to mix a song I wasn’t that excited about because… well, it maybe could just be the last song you work on for an album project. That has happened a few times and I at first I would say I don’t feel I can do anything with that and then I’d say well, let’s try something. … and you know it’s amazing how some of those things worked out.

Tell us about your work with ROB HARDT and FRANK RYLE and their COOL MILLION project…. what do you think of Europeans kind of high-jacking your sounds and style.

Well, I guess they’re are – to a certain extent. Yes definitely, I think they are trying to capture the feel and sound I get but it doesn’t quite get there. When you’re around so many live sessions there is a certain feel that you sense and it just doesn’t happen when people do too many overdubs to try and achieve the same feel. I was really spoiled by Philadelphia and their way of recording. They knew it wasn’t just one thing – they knew you need to build the basic track to create the finished unit. When I mix ROB and FRANK’S tracks I feel I’m trying to give it that same magic, Philadelphia feeling.

Some personal questions now …­ who are your favourite artists and producers… and why do you like them?

TREVOR HORN was one of my favourite all time producers. His ‘Moments In Love’ by ART OF NOISE was a masterpiece. Also his ‘Look Of Love’ by ABC and of course YES’ ‘Owner Of A Lonely Heart’ to name just a few of his works. Then there is the Philadelphia man TOMMY BELL. … pure class and style all the way. You got a long way to go to beat that man with his ballads. BOBBY MARTIN is one of my favourite arrangers and so was NORMAN HARRIS. Between the two of them they did most of the best GAMBLE & HUFF songs. There is one more artist whom I admire and that is ENYA. I remember being in HMV in the UK back in the 70’s and hearing ‘The Theme from Harry’s Game’ and thought that must be the music you hear when you go to Heaven. I must say we need music like this to show us what real beauty is all about and the emotions that go right along with it.

What would you consider to be your greatest achievement…. and maybe your biggest disaster?

Achievement – easy … working at Sigma Sound in Philly and being involved with the staff there and working on some of the greatest music I know…Disaster? I have to think about that one. I guess it would be turning down ABBA who asked me to work on their ‘Dancing Queen’. Yes, I still consider that a disaster for me. I think of that every day and say why did I turn it down!!!!

What does a digital future hold for Tom Moulton?

I actually work in digital all the time at home where I do most of my work. But, I still think analogue, I actually hate the digital sound. It’s very sterile and clean. I still try to make music with the warmth of analogue. I like everything I work on to sound like I am sitting in the most expensive seats in the theatre or the hall. I want people to get the feeling they are listening to something that is alive and then, hopefully, they can get some emotional return from it.