HOW TO MAKE A COOL MILLION 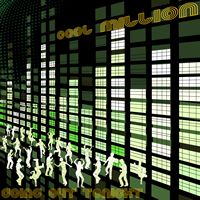 Without doubt one of the best modern soul albums of 2008 is COOL MILLION’S ‘Going Out Tonight’. The Expansion album has rightly won critical acclaim and no wonder! It’s stuffed with classic modern soul tunes all stamped with an unashamed yet irresistible 80s retro feel. Listening to tracks like ‘Give Me My Love’ and ‘Damn Beautiful’, you’ll be asking yourself where you’ve heard that one before. You’ll be haunted by a familiar riff or a catchy refrain, but before you can place them, your attention will be whisked away on another familiar-sounding classy soul groove. It’s all quite magical and strangely compulsive. www.soulandjazzandfunk.com’s BILL BUCKLEY resolved to find out why ‘Going Out Tonight’ offers so much. He discovered that COOL MILLION is essentially an enthusiastic Euro duo – FRANK RYLE and ROB HARDT and after a little more detective work BILL tracked FRANK down to his mountain retreat in Denmark. BILL began by asking FRANK how COOL MILLION came about and why they used that odd name…..

Originally Cool Million was founded by me – Frank Ryle – and Jesper Koan and the idea was to make some cool modern soul. At some point we talked about a suitable name for the project and came up with Cool Million, by accident. Actually it was a joke between Jesper and me. Jesper had some work going on with a US pop singer and an agreement laying on his desk that he was about to sign with a US manager. I asked him what kind of money was involved if any… and he replied with a “well give me a Cool Million..” We laughed a lot about it and I said why not use that name Cool Million for the project, so that was it..

How did your track, ‘Naughty Girl’ come to the attention of Expansion Records?

Well I know Ralph Tee from Expansion through my other project Soulportal.dk, a Danish website focusing on soul music, that’s been around for over 7 years. Over the years I’ve been doing many reviews on various Expansion releases and I interviewed Ralph some years ago, even invited him to Copenhagen to DJ. So when the track was ready I just passed him the track and one thing led to another.

How did you feel about the song being featured on one of their famous Togetherness albums?

Well, I felt pretty good… The ‘Soul Togetherness’ compilations are in my humble opinion one of the best things to wait for…. always packed with high quality soul music and pure bliss from start to end. So naturally I was extremely happy.

Did the success of that song lead directly to this album or is there another explanation?

When working on ‘Naughty Girl’, I had the idea of a full length album in the back of my head. But first we started on a track featuring Bobby Cutchins and when that track was almost finished Jesper decided to leave the Cool Million project. So I was in a trance for an hour or two, then I decided to ask Rob – whom I knew through my soulportal site. He said yes to me straight away, and I told him my plans and he agreed and we started working on the album from day one.

All the tracks on the LP have an authentic 80s retro feel – why?

That’s the way we like it. No, it has something to do with a mutual feeling between Rob and I. Both of us miss that 80s feel in the modern soul music of today. And we agreed to take a chance and try to bring some of the 80s magic back. Rob and I started out listening to soul music in the early 80s: you know people like Nile Rogers, Bernard Edwards, Jam & Lewis, Nick Martinelli, Kashif, Paul Laurence and Mtume … that whole thing with the synths, 808 drum machine, party time lyrics, happy vibe and soul music you can actually dance to… It’s hard to find good uplifting soul music these days unless you go with soulful house. We wanted to end that with our album and on top of that I think I prefer the uptempo tracks most of the times.

How did you achieve that 80s feeling?

That’s totally Rob’s achievement… he is one of the most wicked studio musicians around and very talented as a remixer as well.

Take us through some of the tracks and tell us what were the inspirations behind each song – or, to put it another way, what is the musical point of reference for each song? For example is ‘Damn Beautiful’ modelled on ‘Juicy Fruit’?

Yeah, you could state that a track like ‘Damn Beautiful’ is our tribute to Mtume. ‘Walk Away’ clearly has its inspiration from Kleer. In fact Woody from Kleer was very impressed with our sound on that track. A track like ‘Music’ featuring Jahah came out so it could sound as something Butch Ingram did in ’84. But the overall idea wasn’t to copy anybody but somehow use sounds that reflected that period and still be able to hear that it was made in 2008. We wanted to give the audience a little teaser… like I have heard it before, but who is it? Get them interested.

Why did you choose to cover Carol King’s ‘Its Too Late’?

Simple… it’s one of my favourite tracks. It’s a killer song and I have only heard it covered once by Gene Rice. So I figured it would be suitable for one of the best singers in Denmark, Karen Groth. She agreed to do it, and it turned out pretty good I think. In fact so good that we got a request from Mr. Tom Moulton letting us know that he wanted to remix it.

How were the songs put together? Who does the music, who does the lyrics?

The whole project is very low budget, so we had to find singers who would do it just for the love of it. We used My Space to get in contact with many of the singers; presented the concept and passed them different rough backing tracks to choose from, then they came up with want they wanted and passed their vocals to us and we finished the track with the 80s sound in mind. I do the rough first things, and Rob is the guy who arranges the vocals and the music as he is the music master.

First and foremost we hope it will do really well on the soul scene in the UK and Europe, then Japan and the US. It’s hard work, but we believe that this is an album for everybody. You don’t need to be a soul head to feel Cool Million, so if we could get the BBC and other major radio stations and big name DJs to play us, we are sure it could/would crossover to a bigger market. But for that we must do a lot of work and maybe we would need a bit of luck.

Some critics have said that there is little point in recreating old sounds… how would you respond to that?

I don’t see their point – for progression you have to look back once in a while. Look at how fashion works – designers get inspiration from all decades so why shouldn’t music be that way. Right now there’s a lot of music with a heavy influence from the 60s and even the 80s. We think it’s all good – you don’t have to be a copy cat, but it’s cool to use elements from back in the days.

What are your views on the current modern soul scene?

From where I am I think it’s too small: I think there should be a lot more soul music in radio, television and clubs etc. There’s some good music out already, but it’s hard when the major labels and radios only look for R&B and hip hop. So the underground has to open up, and try to make it less underground. I was attending a Soul Weekender earlier this year, and I was thinking that in 10 years time half of the crowd would be dead! I think they should really think about how they could bring in new generations – if it’s the same DJs that are playing to these events and even the tunes are the same you don’t get new blood. So I would say that the UK soul scene – which is the biggest in Europe – should look at what they do in other countries. Invite people over from Denmark, Germany, Sweden etc to play at these events. Make a bigger community. It doesn’t have to be a secret or for soul heads only.

And what about your plans for the future?

Get people turned onto the Cool Million sound, do more music under the name Cool Million. Enjoy it and see how far it will bring us.

Tags: HOW TO MAKE A COOL MILLION