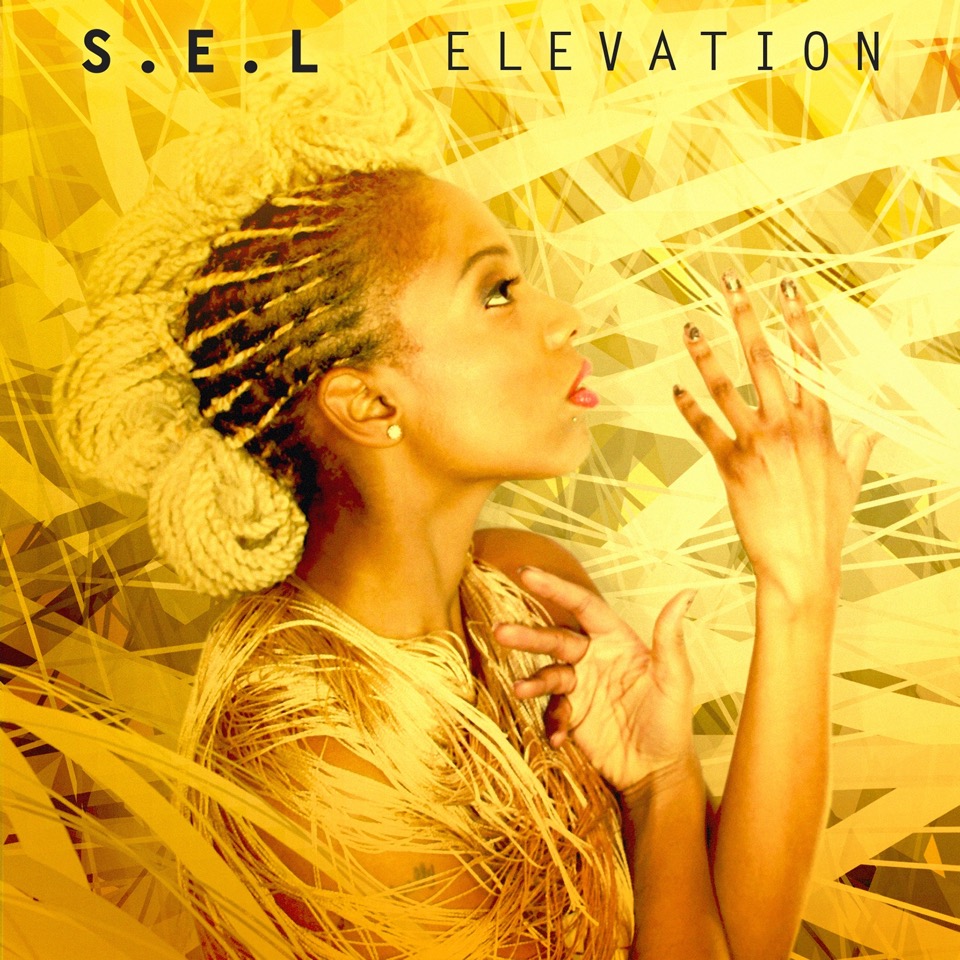 EMMA LOUISE HARRIS is a North London soul singer but she’s known to the soul cognoscenti as S E L (Soulful Emma Louise…. geddit?). Those same soul cognoscenti are predicting that by the end of the year S E L will be out there, known and recognised in the mainstream. The evidence? Well, it’s there on a recently released EP – simply titled ‘UK Soul EP’, and the lead tune, a shuffling ‘Elevation’ is winning plenty of airplay and filling lots of DJ boxes. The cut has just a hint of Soul II Soul about it, hardly surprising since S E L is currently working with Jazzie B and his Soul II Soul review. With such a buzz about Emma, we felt it was about time we found out more. After tracking her down we started, logically, by asking how she got into the crazy world of soul music in the first place….

My dad was a soul music lover and you could always hear Curtis Mayfield, Otis Redding and Marvin Gaye playing in our house. I fell in love with Luther’s voice when I first heard it. Having said that, the first time I really heard Soul music that spoke to my soul. The first time I knew it was going to be a major part of my life…Well, when I heard Soul II Soul’s ‘Back to Life’. I was glued to Caron Wheeler’s voice and I loved the whole flava! They were not afraid to be different, which is what I loved about them. Plus, it was the first time I heard soul music that I could relate to as a black British person – It was very British!

I decided on ‘UK Soul’ because I wanted the listeners to know what to expect from the EP…taking that authentic UK Soul sound back to its grass roots.

We heard you’ve been in America touring the new EP … how was that? Which states did you visit and what do you think the differences are between the US and the UK?

My management is based in the US, so they deal with all aspects of my USA career. We wanted to do a mini promo tour in a city that has a large Soul music following, is affluent but not necessarily known for having lots of female soul artists come out of there. We were split between Atlanta and Charlotte and went with Charlotte. My experience was amazing! It was an intense week, hugely busy with a fusion of TV interviews, radio Interviews, appearances and 3 live performances in 3 different venues. One of which was an EP Launch with press.

We also read that you’re a classically trained musician

I heard Vanessa Mae play her violin when I was like four or five years old and was hooked. I asked my parents for lessons there and then. I then started the piano at 7 I think…music consumed me from a young age. I couldn’t think of or enjoy anything else….well music and swimming professionally, but that’s another story. My mum opened my eyes to all types of music and all different genres too…from Dolly Parton to Fleetwood Mac to Nina Simone. Being classically trained and being around so many genres of music enabled me to understand music on a deeper level and therefore create music of all genres. To fully explore the musician and artist that I wanted to be. I wanted to take my music education as far as it could go. Doing my degree was probably the time whereby I discovered who I was as a musician.

You’ve also been an integral part of the Soul II Soul Live show and band …how did that come about?

An amazing story about why you should do unto others as you would like them to do to you. I was in a really established gospel choir that was run by a famous reggae singer worldwide, known for her amazing vocal arrangements. We toured the nation doing backing vocals for lots of top reggae artists from around the world. Rehearsal was every Thursday evening and we were about 30 members strong. One day the choir leader said she was moving over to the USA and that her best friend and a member of the choir, was taking over the running of it. I had always respected both women’s vocal ability so I wasn’t really fazed by this change. Anyway, as soon as the choir leader left and her best friend took over…..one by one the members started to drop, until it was only me that would attend! After like six weeks of us having what I can only describe as, one to one lessons, she sat me down and said that it was so upsetting and soul destroying for her that everyone had left that she didn’t want to continue. I felt so awful for her. She was an amazing person and a very technical singer whom I had grown to really admire. She continued by saying to me that she was very grateful for the fact that I carried on coming and her words were, ‘I won’t forget this, you will be blessed.’ I kept telling her it was nothing and I loved learning from her, she kept repeating, ‘no Emma, you will be blessed, I won’t forget this’. About two weeks later, this same amazing woman called me randomly and said that Soul II Soul’s Jazzie B had just called her to say that he was looking to replace his backing vocalists and wanted her to manage and source other backing vocalists for him, to take on the role of lead backing vocalist and arranger. She said she had politely declined as she was still feeling a bit disheartened and just didn’t feel like singing. However, she said she personally recommended me for the job and gave him my number! The next call I got was Jazzie’s….June 2006 and I’ve been with him ever since! Managing the girls, choreography, vocal arrangements. I do some lead and some backing vocals too. I love the Soul II Soul family.

You’ve also mentioned that Soul II Soul has been a ‘real education’ for you … in what ways has your education progressed through working with them?

Through them I have learnt lots about the music business, perfecting your craft and always being the best! That’s Jazzie’s ethos. Everyone I employ, whether it’s for my S.E.L stuff or my Soul2Soul stuff, I maintain and have a certain standard. I strive to always be polite yet stern and work within my standard, maintaining the high level that I always set myself in all situations.

You’ve been working in music for 12 years and what are your proudest moments and highlights to date?

That’s a tough one…there has been so many! There’s my debut single …………… it was track of the week on Jazz FM 6 years ago. Hearing my music on the radio, hearing my debut single playing as I walked into Topshop…So many highlights! Then there’s performing to thousands of people and singing one of my original songs in the Soul II Soul set, worldwide! South Africa’s response to my solo section of the Soul II Soul Live show is definitely one too. The first time I sold out a venue. I love my life, truly. I tour the world meeting new people; I perform the songs that I write. I have an amazing band, I have an amazing manager….life is good man!

What are you currently working on and what’s coming up for you in the next few months in terms of releases or live dates?

At the moment everything is going into my new ‘Elevation’ Single and ‘UK Soul EP’, and I’ve just confirmed DJ Spen is going to remix ‘Elevation’ so that’s huge news. I’m doing my usual festival run with the Soul II Soul and I have a couple of live summer dates that I’m working on with my band. I also try my best to keep my website updated.

What artists influenced you?

The first song really loved was ‘Wild World’ by Maxi Priest. I kept rewinding it. It’s still my favourite song in the whole entire world and if I could, it would be on repeat forever and ever! All the time! The first time I saw Prince I fell in love, literally. Those dreamy eyes. I didn’t even understand when I was that young. However, as I grew, I loved him more and more for the artistic individual that he was, the creative soul he had. He’s been a major influence on me…’Raspberry Beret’, ‘You Sexy Mutha*’ and ‘Betcha By Golly Wow’ and then at the age of about 12, I heard, ‘The Most Beautiful Girl In The World’ and I dreamt of someone someday singing that to me…as girls do. Prince has a song for every generation! Janet Jackson has also hugely influenced me, though we don’t make the same type of music. I love her not only for the amazing artist and performer that she is, but I strive to be as humble as her. Everyone who meets her comments on how amazingly humble she is.

OK, then …how would you describe your vocal style… Prince or Janet?

My vocal style…mmmmm, it’s just me! I would call it sultry actually and I try my best to enable the audience or listeners to feel the emotion of the words expressed through my vocal.

Another tough one, then…. Who is the most inspirational and influential person in your life and why?

My mum. She’s overcome so much in her life and is the most educated person I know. She got her degree and master’s degree while holding down like 3 full time jobs. She inspires me to always be the best possible version of me. My dad too, they are both immigrants from the Caribbean, who came over as children and have worked very hard to be the educated professionals they are today.

And what does the future hold for you?

I will always be in the music industry. After the EP, I will be working on my album and doing lots more over in the USA too. I am hoping to get into more of the song writing and arranging side over the next decade or so as I love the creative process.

S.E.L releases her new single ‘Elevation’ on May 30th and taken from her debut ‘UK Soul EP”.